"Return to Steelport" is a mission in Saints Row: The Third.

The barbarians are at the gate--we need a general not an ambassador!

— Killbane, claiming his right as Phillipe Loren's successor as leader of The Syndicate.

Following Loren's death and the apparent end of The Syndicate,[1] the Saints return to Stilwater to have a funeral for Johnny Gat. The funeral procession is stalled in traffic due to the Hughes Memorial Bridge opening ceremony being unveiled by Monica Hughes in memory of her husband and the main antagonist of the first Saints Row, Richard Hughes. It is interrupted as the Luchadores pull a surprise attack on the Saints. The Saints attempt to escape, but Killbane and other Luchadores from afar send them into the water with Annihilator RPGs. There, the Saints discuss returning to Steelport to take down the rest of The Syndicate, with Oleg stating that he knows a couple of people who also hate The Syndicate and want to destroy it. Monica, angered over the sudden loss of her husband's bridge due to gang warfare, orders an emergency session at United States Congress, beginning the later formation of STAG.

The Saints look for a former FBI agent named Kinzie Kensington; they discover she is being held captive by the Deckers aboard a barge and free her.

When they lose the Morningstar chasing them, Playa and Pierce untie Zimos and go onto their next person of interest: Angel De LaMuerte, an old enemy of Killbane. Playa and Zimos head over to Angel's Gym and clear out the attacking Luchadores. Oleg arrives to help out. Together, Playa, Zimos, Oleg and Angel repel the attacking Luchadores and Brutes.

At an undisclosed Syndicate location, Killbane takes it upon himself to lead The Syndicate in Loren's place and orders Viola and Kiki DeWynter to do "Something. Anything!" before he wonders why he keeps "[those] bookends around". At the Saints HQ, Playa gives a rousing speech to the Saints, echoing the speeches made in "Reclamation" and "Three Kings", ending with the familiar "It's our time now. Let's get this shit started".

This mission automatically starts after completing "The Belgian Problem". If exited, and started from the Cellphone, the Hughes Memorial Bridge cutscene automatically plays again.[2]

Get to the barge

Get in the nearby Miami and drive southward to the barge Kinzie's being held in. In true Saints Row-style, players are advised to accelerate to max speed and drive straight into the lowered rear of the barge, sending the Miami through the air and well over halfway into the barge.

With enough speed, it is possible to land all the way at the back of the barge, avoiding most of the fighting with the Deckers.

Disembark, kill any Deckers nearby, and get to the bridge.

Untie Kinzie Kensington to complete the first third of this mission.

Grab the patrons
Find the owner

Talk to some of the kinky patrons to learn where the owner of the establishment is.

Kill the few Morningstar in the owner's room and, after interrogating him.

The final part of the mission tasks Playa and Zimos with finding Angel De LaMuerte. Despite what Kinzie says on the phone, there is no rush to reach Angel.

Upon reaching Angel's Gym, Oleg joins the fray and the player must defeat a host of Luchadores outside the gym, including an unarmed Brute. Head inside the gym when prompted to meet Angel.

In the finale, players must kill many enemies, including several Brutes. Thankfully, Pierce has rejoined the group. As well as not providing much in the way of adequate cover, this part of the mission is also hard because Angel has a habit of constantly dying; players should always be ready to revive him and should prioritize the Brutes over other enemies. By killing the first Brute fast enough, players can pick up his Mini-Gun and hopefully use it to kill the other two Incinerator-wielding Brutes by shooting their fuel packs before they close in on the player or kill Angel. At the least, be prepared for a few close encounters with death. The mission actually ends after all the Brutes are dead, rather than when all the marked enemies are dead.

Jane Valderamma: "For most people, sexual fetishes are left in the bedroom or the brothel. However, citizens here in Steelport were recently exposed to the darker side of the equestrian world. Several pony carts were used as getaway vehicles during a shootout on the streets of the city. The carts, pulled by people dressed in leather straps and wearing bridles, turned the heads of both the disgusted and the aroused. Not one witness could give a description of the drivers who were shooting each other, most stating they were too busy trying to figure out how the horse tails were attached. This is Jane Valderamma with your Steelport Recreational News."

Monica: "When I left Stilwater for the Senate, I vowed not to forget my hometown roots. My husband gave his life defending Stilwater from gang violence. It is my greatest privilege to honor him with this bridge."
Killbane: "Time for the high spot, boys."
Shaundi (subtitle): "Who the hell are these guys?"
Shaundi (audio): "Who are these guys?"
Pierce: "Whoever this crew is, they float pretty damn good."
Oleg: "They're Killbane's thugs."
Playa: "Kill-who?"
Oleg: "He's the Syndicate's attack dog."
Shaundi: "What he did to Johnny's funeral... that's over the fucking limit."
Oleg: "He doesn't care about rules of engagement."
Playa: "No rules? I can work with that."
Oleg: "You're not ready to fight the Syndicate."
Shaundi: "Watch us."
Playa: "Just relax, Shaundi. Alright big man, what do you got?"
Oleg: "There are others who hate the Syndicate as much as you do. I will take you to them."
Monica: "Can you believe this? On my husband's bridge! No, no, I will not calm down. I'm heading back to the Hill. Book an emergency session. Goddamn it--this is war!"


— "Kinzie Call to Say Thanks"

Pierce: "How we gonna find Zimos? Look for the cat in here who isn't excited to be eating a ball gag?"
Playa: "Or just look for the guy with a rhinestone Z on his back."
Pierce: "Get the fuck outta here man -"
Pierce: "Well. Shit. That's convenient."
Goon: "They went this way!"
Playa: "Shit..."
Playa: "We dont[sic] got time, Zimos!"
Playa: "MUSH!"

Playa: "Sorry about making you, ya know...pull us around."
Zimos: "This is a rescue, right? This ain't some elaborate set up for a gang bang?"
Pierce: "Why you gotta put that image in my head, bro?"
Zimos: "I'll go with rescue then. I'd shake your hand, but these floors are a little sticky if you know what I'm sayin'."
Playa: "I'm good."
Playa: "Find a moist towellete or somethin'. Sup?"
Kinzie: "I found the guy I was talking about..."

Angel: "You're not one Loren's brutes."
Oleg: "And you are not one of Killbane's Luchadores..."
Playa: "Yeah, but they are."

Pierce: "Holy shit. That fucker on the balcony has a mini-gun!"
Angel: "Take Cover!"
Oleg: "I'll take care of this."
Angel: "That brute is coming off the top!"

Be careful, they have flame throwers!

Killbane is addressing Matt Miller and the DeWynter sisters in the back room of the 3 Count Casino
Killbane: "Well, ladies and gentleman, Phillipe is dead and we are at a crossroads. And the question is: who will lead The Syndicate to a new era."
Matt: "Viola and Kiki were Mr. Loren's right hands. Shouldn't they be the ones who-"
Killbane strikes Matt with a chair, knocking him out cold.
Killbane: "I had someone else in mind."
Viola: "Excuse me?"
The scene changes to the Saints HQ
Playa: "The Syndicate has to answer for what they did... and this time, we're taking the fight to them."
Playa: "Since we don't know Steelport I brought in some people who do. This is Kinzie, Zimos, and Angel.."
The scene changes to Killbane
Killbane: "The barbarians are at the gate--we need a general not an ambassador!"
Kiki: "Calm down, Eddie..."
Killbane: "What did you call me?"
Viola: "What'd you like us to do, Killbane?"
Killbane: "Something. Anything! Before I wonder why I keep you bookends around."
The scene changes to the Saints HQ
Playa: "Talk to one of these guys, they'll have things for you to do. It's our time now--let's get this shit started."

— Labelled "Kinzie Development", this unused dialogue references both "The Streets of Stilwater", the opening cutscene of Saints Row; and "What Goes Up...", the final mission in the Carnales story arc in Saints Row, where Playa said one of their four lines in the game (regarding shoes). 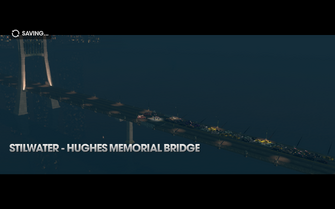 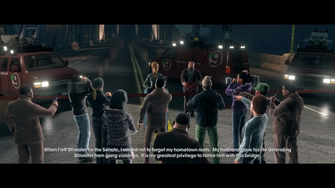 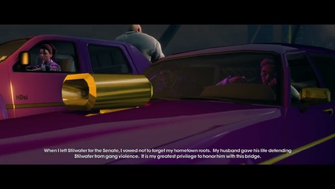 Shaundi, Oleg, Playa, and Pierce are stuck in traffic waiting for the bridge to open 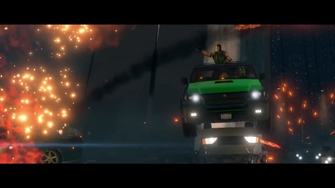 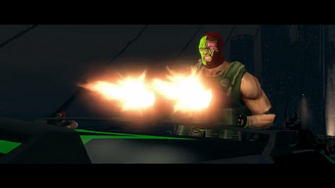 ...and start shooting at the Saints 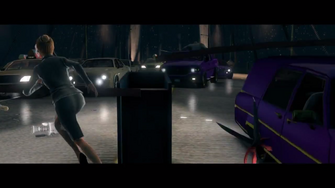 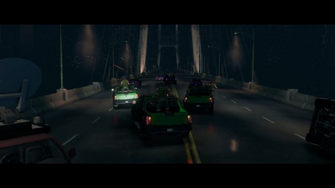 The Luchadores chase the Saints across the bridge 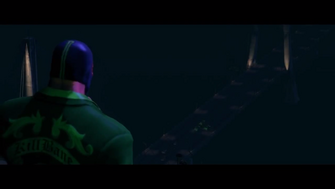 Killbane watches from the rooftops 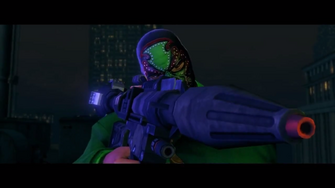 Having set up the ambush, he prepares to fire an Annihilator RPG 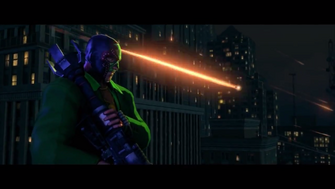 Several other Luchadores on other rooftops follow his example 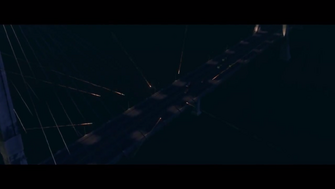 The RPGs head towards the bridge, destroying it 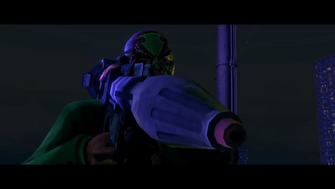 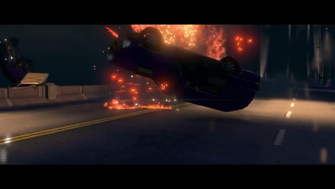 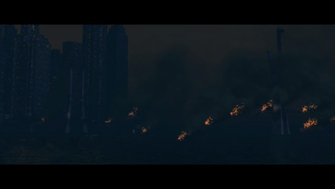 The Hughes Memorial Bridge is utterly destroyed, setting the events of the later arrival of STAG in motion 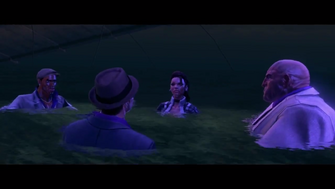 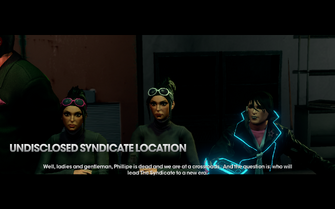 With Kiki and Viola DeWynter and Matt Miller, Killbane discusses him leading The Syndicate following the death of Phillipe Loren.[1] 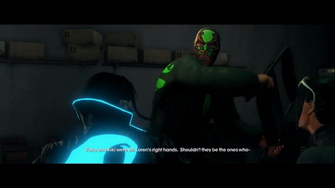 Killbane knocks Miller unconscious with a chair after he suggests the DeWynters should lead The Syndicate. 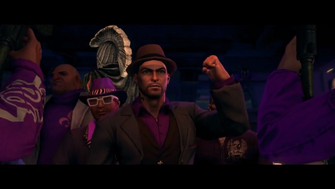 The Saints plan to take control of Steelport. 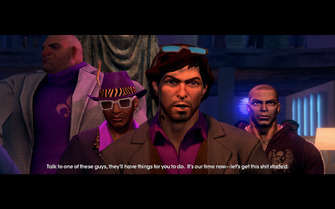 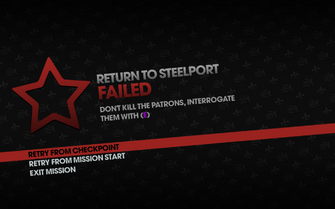 Mission failure screen for this mission. 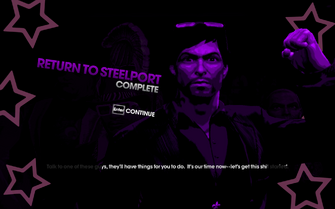 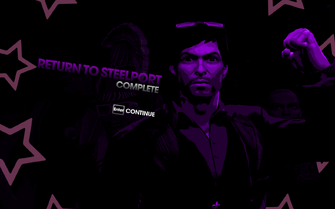 UI image used when saving after this mission. 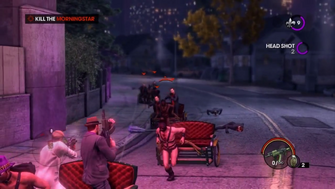 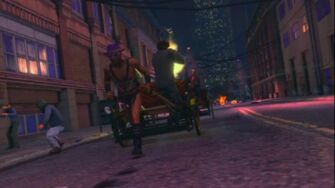 Zimos, Pierce and Playa on the Pony Cart. 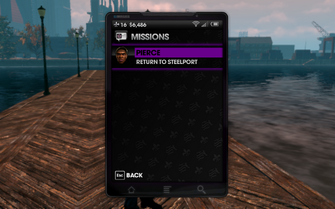 Return to Steelport in the Cellphone 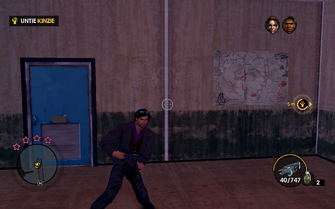 This article contains no references. See Help:Cite.
Retrieved from "https://saintsrow.fandom.com/wiki/Return_to_Steelport?oldid=424401"
Community content is available under CC-BY-SA unless otherwise noted.