"Retribution" is the seventh mission of The Brotherhood story arc in Saints Row 2.

The Brotherhood strikes back at the 3rd Street Saints by wreaking havoc across their territories. Members of the gang instigate gang fights, drive through the city torching the streets, and trash store fronts. After being tipped off by Pierce, Playa heads off and eliminates all of them, including a lieutenant being arrested with a group of 3rd Street Saints by the Stilwater Police Department.[1]

Later, Maero arrives at the Phillips Building and forces Ultor CEO Dane Vogel to use his connections to free any incarcerated Brotherhood members, who in turn phones the unwilling Chief of Police Troy Bradshaw and forces him to make it so.[2]

Stilwater is trying to piece itself back together as the conflict between the Third Street Saints and the Brotherhood spilled into the streets. Witnesses reported multiple incidents of Brotherhood members assaulting Saints property throughout the Barrio. Numerous shops were destroyed in the resulting chaos, and even the police were unable to prevent the fighting from escalating before the Saints apparently gained the upperhand[sic] and forced the Brotherhood members from the area.

There are four objectives that vary in difficulty, which can be completed in any order.

Stop the Brotherhood from destroying the store

Save the Shop Owner

Save the shop owner.

Kill the Lieutenant being arrested by the police

Kill the lieutenant being arrested by the police.

Stop the Brotherhood from torching the docks

This lieutenant is driving along the docks in a pattern, throwing Molotov Cocktails out behind them.

The only strategy here is to pelt the vehicle with as much firepower as possible.

Break up the Brotherhood meeting and kill the Lieutenant

This lieutenant is located at the top of a multi-story car park and flees using a nearby ramp as they are approached.

Chase down and kill the fleeing Lieutenant

It is possible to destroy the vehicle before it escapes, otherwise pursue them and gun them down.

The mission ends once all four lieutenants have been killed.

Troy's boys have rounded up a bunch of Brotherhood and Saints. Nows the perfect time to free our boys and kill theirs...

I'm hearin' on the police scanner that some Brotherhood are driving around torchin' the district.

Some Brotherhood lieutenants are meeting in a parking garage to plan the next part of their attack, bust up their little meeting.

The brotherhood is tossin' the stores that pay us protection money, you gotta stop them before they ruin our investment... 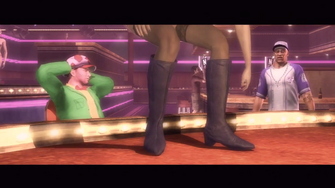 Pierce informs Playa about the attack by The Brotherhood 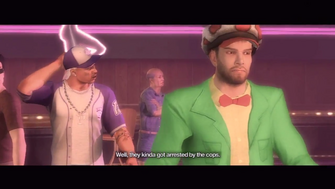 ...and that the 3rd Street Saints are being arrested 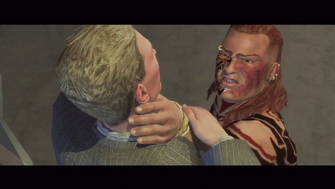 After Playa thwarts the attack, Maero arrives at the Phillips Building and forces Ultor CEO Dane Vogel to let his men free 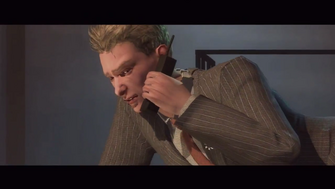 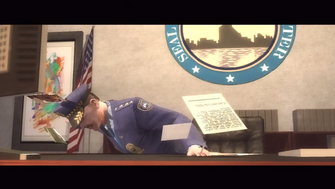 The Chief of Police, furious over his predicament 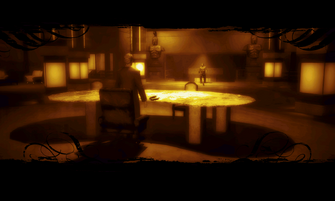 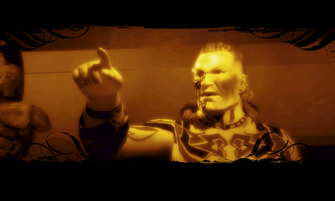 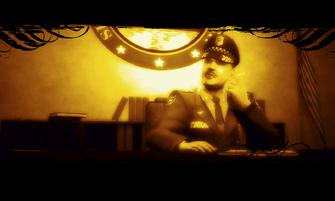 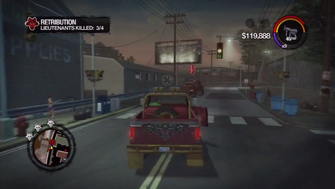 This article contains no references. See Help:Cite.
Retrieved from "https://saintsrow.fandom.com/wiki/Retribution?oldid=425133"
Community content is available under CC-BY-SA unless otherwise noted.