Respect is awarded to Playa for performing various actions like killing rival gang members, taunting enemies such as rival gang members and police, completing Activities and Diversions, picking up Collectibles, performing Combat Tricks and Driving Stunts or anything that uses Diversion stars.

Respect is displayed on a purple HUD meter located in the upper right corner of the screen, it is made up of a colored bar showing the amount of respect required before the next level is reached, and the current Respect level as a number.

The quickest way to earn respect is by performing Activities, other methods of earning respect are not reflected on-screen, but count towards the total Respect.

Purchasing higher quality Clothing, Jewelry and Tattoos increases the Respect Modifier. When shopping at a Store, a Bar is displayed underneath the selected item. This Bar shows how the item affects the Respect Level, a number on the bar showing either an increase or decrease to the respect modifier. In front of the Bar is a number reflecting the current percent bonus. As the bar fills up this percentage increases.

Each respect level is equal to 2000 Respect points.

It is possible to reach 99x respect by completing activities, but it never becomes infinite. Having 99x respect can crash the game upon starting a mission.

Although it is not reported on-screen, each enemy gang member killed earns 10 Respect. There is no respect earned for killing police or Civilians.

When a mission is started, one level of Respect is deducted from the Respect meter. If the mission is failed or cancelled, one Respect level is returned.

Purchasing higher quality Clothing, Jewelry and Tattoos give a Style bonus, which boosts the amount of Respect earned.

When sufficient Respect has been earned to access all remaining missions in the game, the Respect level indicator is replaced with an infinity symbol (

). There is no set level at which the infinity symbol is used, but differs depending on the completion of the game. Doing Diversions after getting max respect still shows respect on-screen, and still adds to the Total Respect Earned in the Statistics menu.

Each respect level is equal to 8000 Respect points.

There are 54 missions and strongholds which require respect, including "Revelation", so a total of 432,000 Respect points are needed to complete all missions.

Completing all 6 levels of an Activity gives 52500 Respect points, which is enough to complete 6 missions. Style bonuses increase this total. Completing 9 out of the 23 Activity locations awards enough Respect to start all missions.

Story missions do not require Respect, but instead award Respect, which is used to unlock Upgrades, which are purchased with Cash.

The maximum Respect level is 50, at which the best upgrades are available, such as infinite ammo or damage immunity. Respect gained is boosted by buying Respect boosting Upgrades.

Story missions do not require XP, but instead award XP, which is used to unlock upgrades, which are purchased with Cache. A total of 281,750 Respect points are required to reach level 50.

In Saints Row: Gat out of Hell, Respect is again referred to as XP, and is tracked by a "Satan's Wrath" meter with markers at XP level 5, 10, and 15. Upon reaching each of these XP levels, a cutscene is triggered. 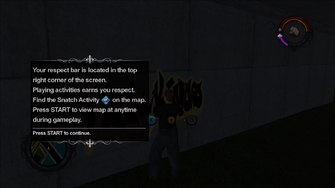 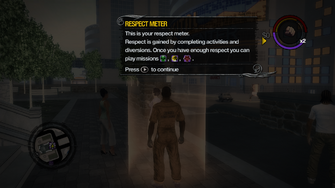