Regicide: The Rise and Fall of the Vice Kings is a book and film in the Saints Row series.

After Saints Row, but before Saints Row 2, Benjamin King writes a book titled Regicide,[1] also referred to as Regicide: The Rise and Fall of the Vice Kings,[2] which, according to civilians, is very inspiring.

During Saints Row 2, a movie adaptation is being filmed and King is being portrayed, in the game universe, by Michael Clarke Duncan,[3][4] who is King's voice actor for the first game in real-life.

In Saints Row: The Third, there is a radio commercial about the movie.[2]

In Saints Row 2, Male Voice 2 has an Idle line along the lines of "I should read King's book. I wonder if I'm in it", while Female Voice 3 claims to have read it during "Laundry Day" when asked about money laundering: "I read about it in Ben King's book; ya buy, ya sell, it doesn't seem too hard". Civilian sometimes random say, "You read Ben King's book? He said some nice things about you". A stripper with the "aspiring author" personality sometimes claims that she ghostwrote King's book. Warren Williams is apparently a much more minor character in the book, as several college students NPCs randomly complain that he is barely in it.

In Saints Row IV, Benjamin King attempts to write a science fiction follow-up to the book and has The Protagonist cause chaos in Virtual Steelport to inspire him. After The Protagonist does so, King assures he will credit them in the back of the book.[5] In Benjamin King's Romance, The Protagonist sheepishly asks King to sign their copy of the book; it is the only Romance in the game that does not lead to a sexual encounter. Future Shaundi's Text Adventure in How the Saints Save Christmas says that King used money he made from the book and moved to a remote island.[6]

Asha: "You know Mr. King, I read your book when it came out."
Ben King: "Really? Given your line of work, I'd be curious to hear your thoughts."
Asha: "Well it was really incisive, I could see how others might benefit from your teaching."
Ben King: "But, not you?"
Asha: "You teach diplomacy Ben, I get called in when diplomacy fails."
Ben King: "Heh, I guess that's true."

Cyrus: "I have to say, Mr. King, I'm a big fan."
Ben King: "Thank you."
Cyrus: "Your book, the story behind your rise and fall in the Vice Kings, the message it gives to those caught in the criminal lifestyle, it really moved me."
Ben King: "I'm glad it did."
Cyrus: "It was instrumental in pitching the STAG initiative to the brass, in fact you might say without you the Special Tactical Anti Gang unit wouldn't exist."
Ben King: "That's... great, yeah."

Ben King: "You know, I was like you once, I thought I could take down the Saints and carry on with business as usual."
Phillipe: "Is that so?"
Ben King: "But if there's one thing I learned, it's that the Saints can't be stopped. I watched them take down gang after gang in Stilwater, and nothing, not even the Ultor Corporation could put them in the ground."
Phillipe: "Perhaps it would have been more useful if your book warned against going toe-to-toe with the Saints instead of spouting all that propaganda about the dangers of organised crime."
Ben King: "You know, that wouldn't have been a bad idea."
Phillipe: "Unbelievable."

Roddy Piper: "You're the same Ben King who wrote Regicide, right?"
Ben King: "That's right, based on my life. Did you read it?"
Roddy Piper: "Nah, saw the movie, though, it was good."
Ben King: "Well, thank you."
Roddy Piper: "Guy who played you sounds nothing like you, though."

Veteran Child: "Hey, been meaning to tell you that I read your book, it's really good."
Ben King: "Thank you very much."
Veteran Child: "No, thank you. You're like an empire god, you know all the tricks. I learned a lot. That's how I built a legion of loyal followers."
Ben King: "I think the addictive properties of Loa Dust started things for that."
Veteran Child: "That hurts man. I was talking about the dedicated listeners to my show on GenX FM."
Ben King: "Oh. Heh. Sorry about that. I keep forgetting you're an actual DJ." 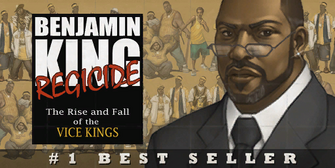 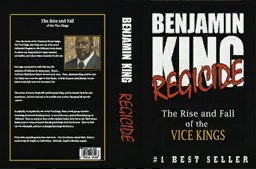 Retrieved from "https://saintsrow.fandom.com/wiki/Regicide?oldid=405469"
Community content is available under CC-BY-SA unless otherwise noted.