The RC Possessor[1] is a weapon in Saints Row: The Third.[2]

Why play with a tiny remote-controlled car when you can remotely control a full size vehicle!

The RC Possessor shoots a tag-like projectile which can take control of vehicles, presenting the player with a third-person camera view as if they were driving the vehicle in question; while controlling a vehicle Playa stands upright and perfectly still, and can still take damage. By default it can control anything except military vehicles. The second upgrade increases ammunition count, while the third upgrade allows detonating controlled vehicle on command. The fourth upgrade allows the RC Possessor to control tanks and military aircraft.

There is no time limit for controlling a vehicle, but there is a range limit; if the vehicle moves outside the fixed radius from Playa, control is lost. When this happens, vehicles with nobody inside coast to a halt, while occupied vehicles resume normal activities after a few seconds; aircraft often crash before the pilot regains control. Remote control mode can also be exited at any time.

Controlled vehicles are operated using normal driving Controls, includes those with turreted weapons, even if there is a crewman manning the weapon in question. Any NPCs in the vehicle are ignored, but Co-op players are not. Stopping a vehicle or landing an aircraft causes the driver to exit after a short time, making the vehicle easy to steal. Exiting a possessed vehicle appears to be treated the same way as passengers exiting a stolen one. Enemies never attack a possessed vehicle; instead they attack Playa if they use a mounted weapon.

The weapon is unlocked after completing the mission "The Belgian Problem." The is featured in the mission "A Remote Chance", which is structured rather like a tutorial, even though the weapon has been available for a very long time by that point.[1] 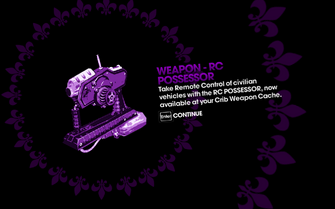 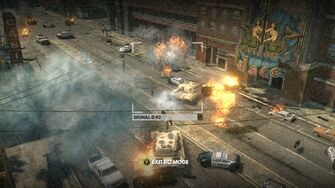 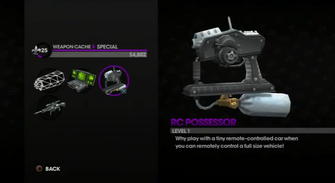 The RC Possessor in the weapon selection screen 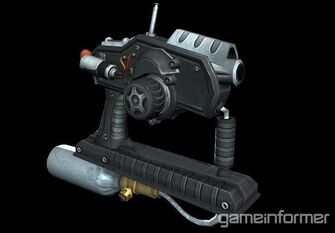 Promotional image of the RC Possessor from GameInformer Magazine 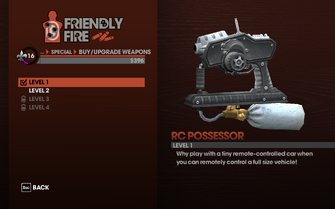 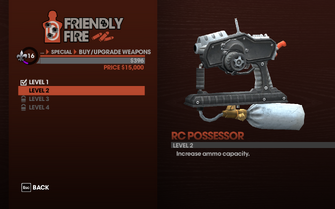 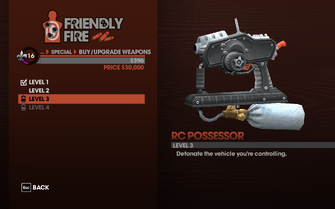 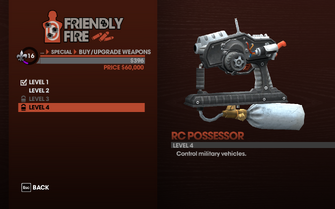 This article contains no references. See Help:Cite.
Retrieved from "https://saintsrow.fandom.com/wiki/RC_Possessor?oldid=425898"
Community content is available under CC-BY-SA unless otherwise noted.