The Platinum T3K Urban is a weapon in Saints Row.

It is a platinum plated version of the T3K Urban with a 65 round magazine, and is unlocked after completing the Vice Kings Hitman Activity.

It has the same rate of fire and does twice the damage of the normal TK3 Urban, and comes with 365 rounds when picked out of the Weapons Cache. 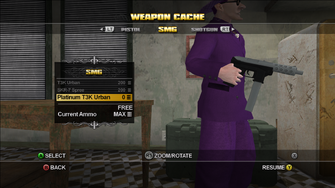 This article has been rated 08

Retrieved from "https://saintsrow.fandom.com/wiki/Platinum_T3K_Urban?oldid=338022"
Community content is available under CC-BY-SA unless otherwise noted.