The Platinum AS12 Riot is a weapon in Saints Row.

This weapon is an upgrade of the AS12 Riot and is unlocked in the Weapons Cache after completing the Hitman Activity in the Chinatown District.

Parts of the weapon are plated in platinum, which visually differentiates it from the normal AS12 Riot, being shinier. Aside from the cosmetic differences, the weapon also packs a deadlier punch than the normal AS12. The ammo capacity is increased to 15 slugs, and it delivers mostly one-hit-kills from short to medium range. Damage is also higher on vehicles, destroying most types in a matter of two to three hits. While the weapon is very similar to the Pimp Cane in terms of ammo capacity and damage, it is, arguably, a better choice of weapon due to the higher rate of fire. 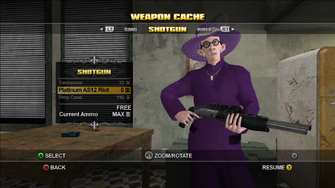 Retrieved from "https://saintsrow.fandom.com/wiki/Platinum_AS12_Riot?oldid=339848"
Community content is available under CC-BY-SA unless otherwise noted.