I'm Joshua Birk. On TV I play Nyte Blayde, an exceptionally good looking but misunderstood vampire who risks life and limb every week to keep the world safe.

Franklyn Nyte,[5] known better as his alter ego Nyte Blayde, is a vampire-hunter-turned-vampire.

After the death of his wife, Sylvia, at the hands of the vampire Mr. X, Nyte Blayde joins the Cyprian Order to hunt and kill vampires in an effort to find his wife's killer. However, after being turned into a vampire himself, the Cyprian Order turns against him, and he is forced to fight a two-sided battle.

He is portrayed by the actor Josh Birk.

Nyte Blayde is featured in a training simulation created by Matt Miller, which is based on one of his fan fictions. It involves a plot where they must track down the Cardinal, and Nyte Blayde calls upon a delighted Matt for his assistance. Nyte Blayde arrives at the 3 Count Casino to meet Matt and The Protagonist and they follow him in order to search for the Cardinal. He rides the Bloody Cannoness, while The Protagonist drives the Nyte Blayde.

He is the boss in Super-Powered Fight Club, in the Salander neighborhood.

The events of each episode of Nyte Blayde season 1 are advertised on the radio after post-mission news reports.

After these events, he falls in love for a woman named Marion; although she wants a relationship, Nyte Blayde tells himself he doesn't, claiming, "after losing Sylvia, I can never love again".[10] The Cyprian Order, however, are still after Nyte Blayde, and in an effort to get to him, The Bloody Canoness kills Marion.[11][12]

Nyte Blayde eventually confronts The Cardinal, demanding to know why the Cyprian Order are trying to kill him. The Cardinal states that while Nyte Blayde is not like the other vampires, he believes Nyte Blayde's hunger will rise and he will eventually become "no different than Mr. X".[13]

Nyte Blayde soon learns that his best friend, Stu, is Mr. X.[14] Nyte Blayde manages to kill Mr. X, and in the final episode of Season 1, an enemy known only as The Darkness reveals itself to Nyte Blayde and The Bloody Canoness.[12]

During dialogue in the mission "http://deckers.die", Matt Miller makes note of a Season 3 episode of Nyte Blayde, named "Rise of the Cyprian Order", revealing The Cardinal remains a prominent character beyond the events of Season 1.[15]

Both Nyte Blayde and Josh Birk are unlocked as Homies after completing the mission "STAG Party" and giving Josh to Shaundi instead of Cyrus Temple at the end of the mission.

Nyte Blayde and Josh Birk can be recruited at the same time, and act completely differently, with Nyte Blayde acting "in character" at all times even when being injured. However, their Cellphone image is identical, and both have the same responses when called.

In Saints Row: The Third, he drives a Temptress, wields a 45 Shepherd, while Josh wields a KA-1 Kobra. He makes references to the Nyte Blayde TV show. 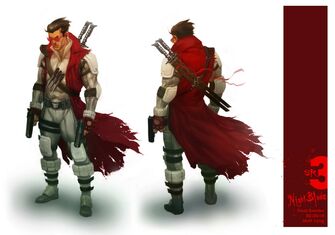 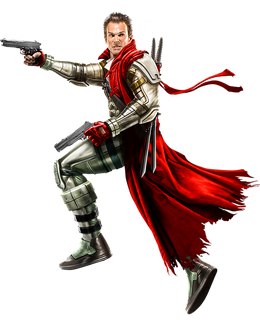 Josh Birk, who portrays the character Nyte Blayde, in Saints Row: The Third

From left to right: Viola DeWynter as The Bloody Canoness, The Protagonist as The Cardinal, and Josh Birk as Nyte Blayde in "Nyte Blayde's Return"

A poster with Nyte Blayde's real name, from inside the STAG PR Center in Saints Row: The Third 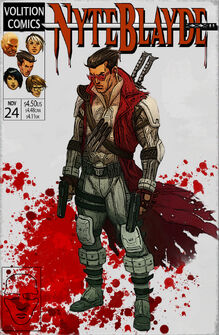 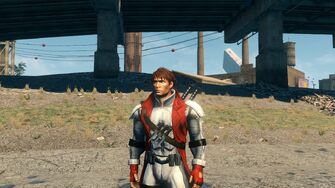 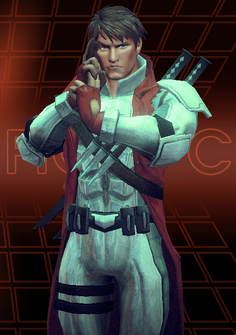 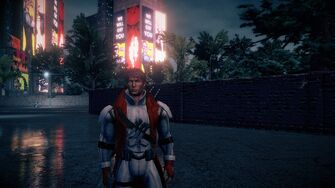 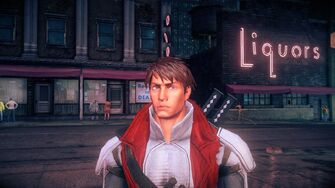 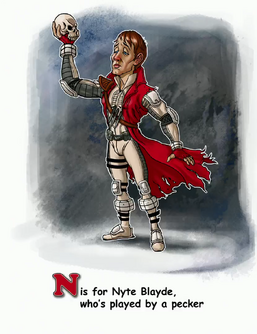 This article contains no references. See Help:Cite.
Retrieved from "https://saintsrow.fandom.com/wiki/Nyte_Blayde_(character)?oldid=343606"
Community content is available under CC-BY-SA unless otherwise noted.