"Nyte Blayde's Return" is a mission in Saints Row: The Third.

Pierce: "STAG is using Nyte Blayde as their mascot. We snatch the punk..."
Playa: "And we draw out STAG."

— Pierce and Playa, at the comic store.

Playa and Viola DeWynter meet Pierce at Steelport News. Pierce has discovered that STAG are using Josh Birk as Nyte Blayde as their mascot; in an effort to draw them out, he assembles a plan for Playa and Viola to sneak in dressed as characters from the show (as The Cardinal and The Bloody Canoness respectively) and kidnap Birk.

After capturing Birk, Playa and Viola are forced to fight their way out of the PR Center and flee to the Saints HQ. On the way, Birk claims that many will go after his kidnappers in retribution, but quickly says he'll play along when Playa tells him Shaundi will be there.

After discovering that the Saints managed to get to Birk, Cyrus Temple informs Monica Hughes of what transpired, but assures her that STAG will find him.

Go to the PR Center

From Sunset Park Thunder Pump, drive to the PR Center.

Head inside. If any weapons are current equipped, there is a ten seconds to put them away.

Go to the reception desk

Open reaching Josh Birk, he must be brought through the PR Center, repelling waves of STAG soldiers; this is challenging due to having Josh Birk slung over Playa's shoulder, which severely hamper maneuverability, as well as only allowing them to use a pistol, SMG, or rifle.

At this point Viola can get "stuck", unable to enter the room where you enter the elevator. You get the "abandoning follower" message. Ignore it, she reappears in the next scene.

After fighting through the multiple rooms down towards the car park, climb inside the Infuego.

Escape to the Saints HQ

Go back to the Saints HQ. The drive back is fairly uneventful and straightforward provided a Crusader tank is not encountered.

Jane Valderamma: "Tween girls cried out in heartbreak as the rumor of Josh Birk's kidnapping spreads. The idolized actor, who portrays the vigilante vampire Nyte Blayde, was reportedly forced out of the studio at gunpoint and thrown into the back of a vehicle. At this time it is unclear if Birk is alive or dead. Support sites are popping up on the Internet by the hour begging those responsible to let the actor go, while opponents of the violence seen on the show are claiming this is karmic retribution. This is Jane Valderamma with your Steelport Celebrity Gossip."

Viola: "Oh look - Pierce can read."
Pierce: "Girl, I don't gotta explain myself to you. STAG is using Nyte Blayde as their mascot. We snatch the punk..."
Playa: "And we draw out STAG."
Pierce: "Set it up right, we'll get the drop on those motherfuckers."
Kid: "Um... excuse me?"
Kid: "Could you sign this?"
Playa: "The fuck is this?"
Pierce: "Dude, it's Johnny's comic...he sold his likeness to Ultor, they're making a movie outta this shit."
Playa: "Remind me to call Legal Lee about this."
Playa: "So how do we find Birk? The chump could be anywhere."
Pierce: "We lay the right bait, he'll come to us. That's why I need you and the new girl."
Viola: "My name's Viola."
Pierce: "Your name's the Bloody Canoness."
Viola: "You can't be serious--!"
Playa: "Works for me."

The shoot's up on seven. Nyte Blayde is already practicing.

Josh takes deep breaths and rehearses: "Josh Birk"
I am Nyte Blayde... I have no fear... I will save Marion and I will destroy Mr. X.: "Josh Birk"
You guys wanna do some warm ups before we shoot? Hey, you look familiar...: "Viola DeWynter"
Really?: "Playa" 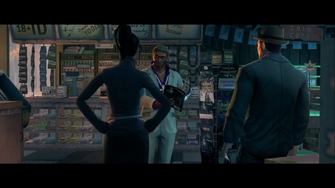 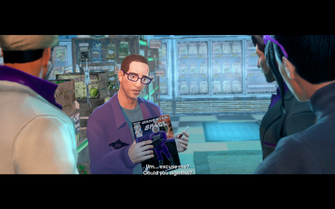 A Jimmy Torbitson-esque fellow asks Playa for their autograph 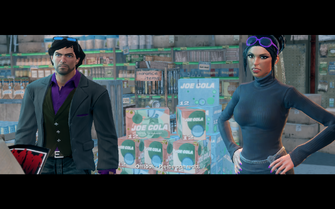 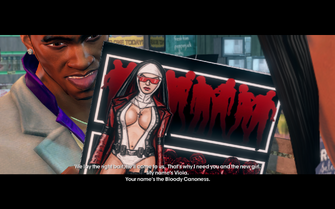 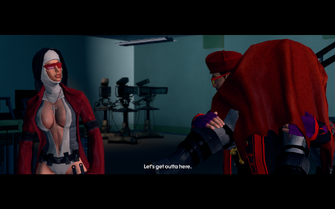 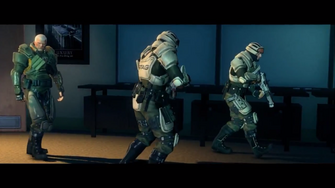 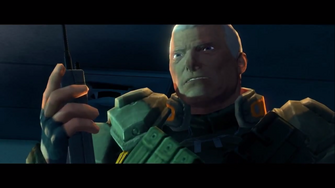 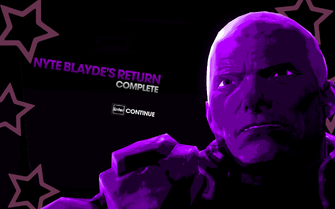 UI image used when saving immediately after this mission 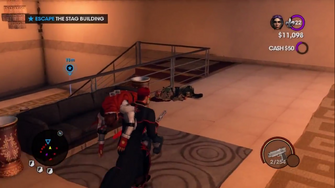 This article contains no references. See Help:Cite.
Retrieved from "https://saintsrow.fandom.com/wiki/Nyte_Blayde%27s_Return?oldid=425554"
Community content is available under CC-BY-SA unless otherwise noted.