"My Name is Cyrus Temple" is a mission in Saints Row: The Third.

— Kia and Playa (as Cyrus Temple) talk aboard the Thermopylae.

Playa calls Pierce and informs him that Shaundi has been kidnapped by STAG.[1] Playa quickly creates a plan and tells Pierce to meet him at an Image As Designed. There, they inform Pierce and Viola DeWynter of their scheme to use plastic surgery to look like Cyrus Temple, the commander of STAG, and take the pair to the Thermopylae. There, under disguise as Cyrus, they infiltrate the aircraft carrier and save Shaundi.

Once they reach the Thermopylae, the plan goes awry as a STAG Commando escorts Viola and Pierce to the ships detention center and Playa, as Cyrus, is forced to walk with Kia to approve some prototype designs.Kia receives a message from the real Cyrus Temple and, after a brief scuffle with Playa, she is locked in the room as Playa escapes. Under fire from STAG, Playa reaches the brig and frees their friends before then destroying the ship's Reactor, causing a chain reaction that destroys the aircraft carrier. The four escape on a Condor VTOL and watch as the Thermopylae sinks into the ocean. The gang are satisfied that STAG are no longer a problem, but twelve hours later STAG enforce martial law on Steelport and raise the bridges to and from Downtown.

Go to Image As Designed

After the phone call with Pierce, head on over to Image As Designed in Rosen Oaks and watch the cutscene.

Head inside the N-Forcer waiting outside afterwards and drive on down to Sierra Point and commandeer the vacant Condor VTOL.

Land on the Thermopylae

Once Pierce and Viola are inside, fly towards the Thermopylae for another cutscene.

After walking alongside Kia as she slowly makes her way to Research and Development, the choice is given to "sign off" on two of three unique "projects", which are unlocked as a reward after completing the mission.

After Playa's disguise is blown, head down to the brig to rescue the three Saints. The brig isn't exceptionally far away but there are a number of STAG along the way, some with Riot Shields.

Along the way is an insignificant trap set up by STAG which involves Flashbangs and Riot Shields.

Destroy the console by shooting it. The Reactor Control Room houses two Specialists with sniper rifles at the end of the area near the console.

Once the console has been destroyed with gunfire, there is three minutes to reach the hangar and steal a VTOL to escape. Follow the hallways to escape. The resulting explosions should take care of the majority of STAG soldiers.

take the Condor VTOL at the back-right (also southeast) of the hangar; the other VTOLs explode when approached.

Jane Valderamma: "Steelport's coastal waters gained a new landmark when the aircraft carrier Thermopylae, operational headquarters for the STAG Initiative, suddenly exploded, scattering wide portions of the wrecked ship over a wide area. Casualties are believed to be surprisingly light. No official cause for the accident has been given, but STAG quickly reassured the city that the ruined nuclear carrier posed no health risk to the city. Commander Temple has shifted his headquarters into Steelport and temporarily restricted the downtown area. All residents are assured that any inconveniences are purely temporary. This is Jane Valderamma with your Military-Approved News."

Pierce: "This is the worst idea you've ever had."
Viola: "We can't go marching onto STAG'S aircraft carrier."
Playa: "Why not? I'll look just like Cyrus--all I gotta add is a fucked attitude."
Viola: "What happens once you're on board?"
Playa: "I walk in with my prisoners, they take me to the cell block, I grab Shaundi and we leave."
Viola: "I'm sorry -- prisoners?"
Playa: "Yeah, you and Pierce. I'm bringing you in."
Pierce: "Aw hell no!"
Playa: "Showtime."

Cyrus: "Kia, I'm on my way back to Thermopylae to interrogate the prisoner. Make sure no one else has access to her."
Playa as Cyrus: "So that's your name."

— Pierce, after being freed

Can we leave yet?

— Viola, after being freed

This is Commander Temple. All personnel are to shoot any person looking like me and any Saints with me.

Cyrus: "Make sure the Saints go down with the ship!"
Cyrus: "All troops, abandon ship."

Playa: "This one's going in the book."
Pierce: "We might've overdone it."
Viola: "Now we can focus on Killbane."
Shaundi: "What about STAG?"
Pierce: "We just blew up an aircraft carrier...what else could they throw at us?"
On-screen text: 12 hours later
Cyrus: "You knew it would come to martial law, didn't you."
Monica: "I knew the Saints. How did Mayor Reynolds react?"
Cyrus: "He'll fall in line, they all will."
Monica: "Keep me updated, Commander."
Cyrus: "Of course, ma'am."
Kia: "Sir, the commandos are en route. We'll have the whole city locked down in 72 hours."
Cyrus: "Outstanding. Thank you, Kia."
Kia: "Permission to speak freely?"
Kia: "It's about damn time we took off the kid gloves."
Cyrus: "Two little words, Kia. Shock and awe."

We gotta go faster, we're running out of time.

More anti-armor on that tank! I want them dead!

Saints have entered the tank bay. Drivers and gunners, get to your tanks! 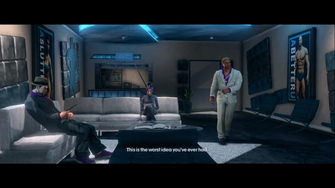 Playa, Viola DeWynter and Pierce meet at Image As Designed 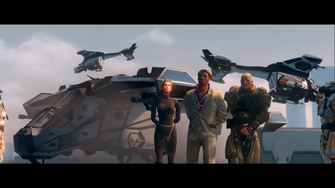 Playa, who has had plastic surgery to look like STAG commander Cyrus Temple, escorts Viola and Pierce to the Thermopylae 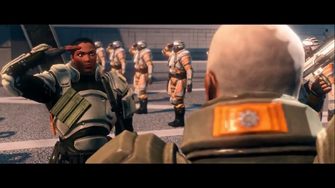 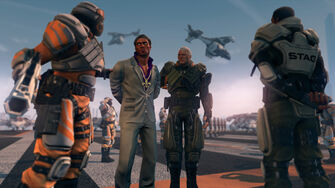 Playa, disguised as Cyrus Temple, turns over Pierce and Viola. In this early promotional image, Viola is not present 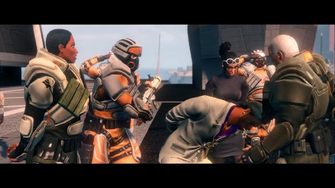 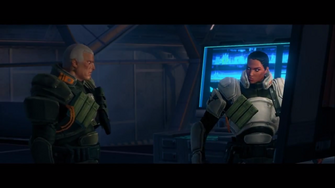 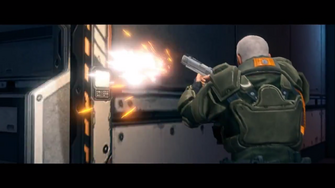 Playa escapes and destroys the door console, locking Kia inside 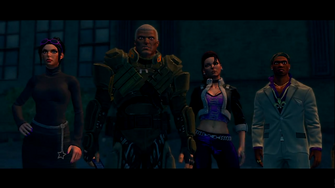 Viola, Playa, Shaundi, an Pierce watch as the Thermopylae is destroyed 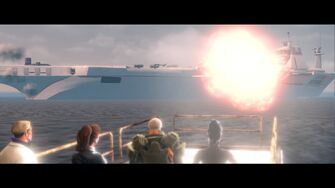 The Thermopylae sinks into the ocean after its Reactor is destroyed 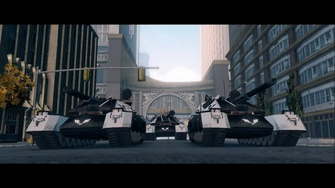 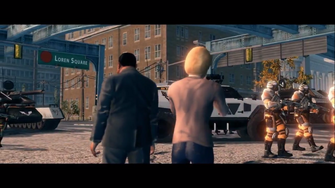 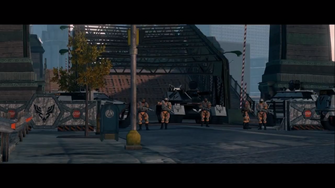 The bridges are permanently raised 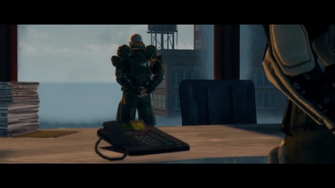 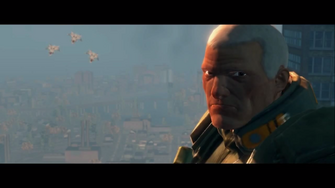 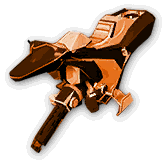 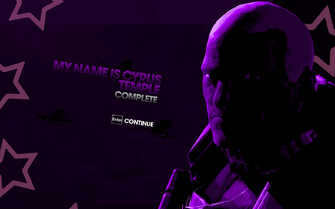 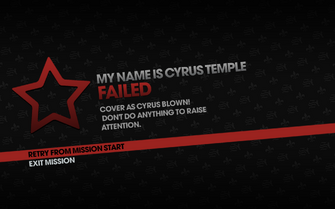 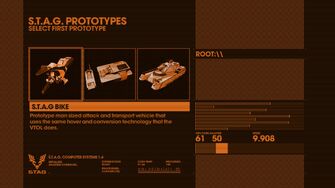 Prototype selection during My Name Is Cyrus Temple mission 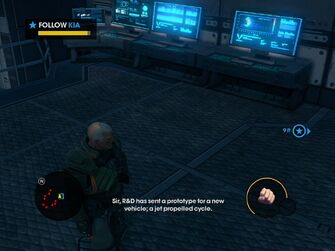 The head clipping error (see above) 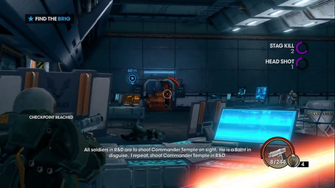 My Name is Cyrus Temple - Find the Brig 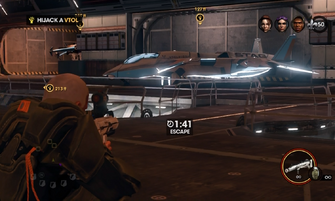 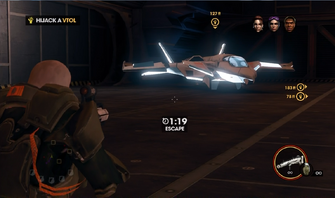