As with real world Molotov cocktails, they are bottles filled with a flammable liquid with a soaked rag hanging out of the bottle. The rag is lit before throwing, and when the bottle smashes on the ground the liquid spreads and the vapors burst into flames.

In Saints Row, Molotov Cocktails are available at Friendly Fire stores at any time for $150 cash. It is possible to carry a maximum of 101 Molotov Cocktails. As with all thrown weapons in Saints Row, tapping the left trigger performs a small under-arm throw, whereas tapping the right trigger does a long over-arm throw, making for some poor accuracy. Using the left trigger when throwing is slightly more accurate.

In Saints Row 2, they are once again unlocked at Friendly Fire through game progression, Molotov Cocktails cost $100 cash. They are often used by rioting civilians during the FUZZ Activity, and are sometimes used by enemy gang members. The maximum number of Molotov Cocktails which can be carried is 11. They are more accurate than in Saints Row as they are thrown directly towards the reticle.

Molotovs were first revealed to be in Saints Row: The Third in a leaked gameplay video.[1] In the game, the Molotovs can be upgraded to increase range and power. Level 4 Molotovs can destroy most small and mid sized cars with one hit. Molotov Cocktails set fire to the surface it hits, but the 'fire' effect is purely graphical; the fire doesn't cause any damage whatsoever.

Molotovs are sold at Friendly Fire at $25 a piece. 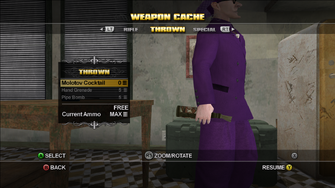 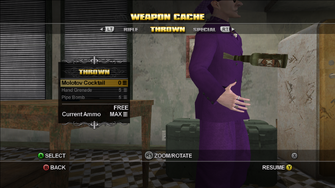 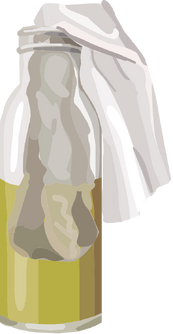 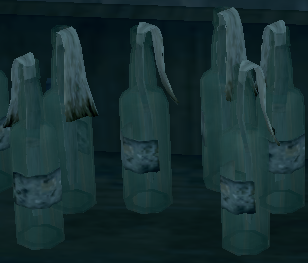 Molotovs on display at Friendly Fire in Saints Row: The Third

Molotovs in Saints Row: The Third

This article contains no references. See Help:Cite.
Retrieved from "https://saintsrow.fandom.com/wiki/Molotov_Cocktail?oldid=416468"
Community content is available under CC-BY-SA unless otherwise noted.