We kill Orejuela, and the Colombians'll be all up our ass. Let's figure out what his game is first, then we'll decide what to do. You know where he is?

— Dex to Playa, inside the church.

Dex and Troy meet Playa once again at the church to discuss their plan of action. With Hector Lopez now dead, the Carnales are feeling the hurt. Troy recommends they kill Manuel Orejuela next, as he's "the mouth piece for the Colombians", thus crippling the Carnales for good. Dex notes that this isn't such a good idea, and instead opts to go and meet Manuel first, and then decide what to do. Dex leaves with Playa after hearing that Manuel is at a strip club in Los Carnales' territory.[1]

Upon reaching the strip club, Victor Rodriguez, furious over Hector Lopez' death, launches an ambush. Dex and Playa manage to flee back to the Row, narrowly avoiding Victor.

The Saints received a tip that Manuel Orejuela , the mouthpiece for the Colombian drug lords, had arrived in Stilwater. Rather than just take Manuel out, Dex decided to try and talk to him at a strip club in Carnales territory. After driving him to the club, you were ambushed by Victor, who sought to avenge Hector's death. Realizing the tip was a setup, you and Dex escaped back to the Row, denying Victor his revenge... for the moment.

Stake out Manuel at the strip club.

This mission has a forgiving timer to reach the strip club in the Airport District.

Lose the Carnales and return to the church.

Upon reaching the District, Victor Rodriguez launches an ambush. Escape Victor and drive back to Saint's Row District.

Simply following the GPS route on the Map back along the freeway is a safe method of escaping Victor. Watch out for other Carnales enemies as the Notoriety builds up. Avoid their vehicles, kill their drivers if necessary and keep driving at maximum speed along the freeway.

While Victor Rodriguez is invincible during this mission, his Bulldog isn't, and can be destroyed with a few rounds from an RPG Launcher. Destroying his vehicle causes him to give chase on foot, although he does not have any weapons and is essentially no longer a threat.

Victor is also immune to fire, and cannot be set alight via Molotov Cocktails or exploding vehicles. Despite this, he can still be ragdolled by explosions, so an effective way to get rid of him for good is to throw him off the bridge using an explosive weapon.

You've lost them. Return to the church.

Once Victor has been lost, return to the church.

The mission can be failed by getting smoked or busted or abandoning or killing Dex.[2][3]

There is also an unused failure condition in the game strings for not reaching the strip club fast enough[4], but this cannot be triggered, as the timer is not activated in the mission script.

Dex: "So this guy's the mouth piece for the Colombians huh?"
Troy: "Yep."
Dex: "And he's in town."
Troy: "Yep."
Dex: "Interesting."
Troy: "We've taken out one of the Carnales' legs. We smoke this guy and they're crippled for good."
Dex: "Yeah, and so are we. We kill Orejuela, and the Colombians'll be all up our ass. Let's figure out what his game is first, then we'll decide what to do. You know where he is?"
Troy: "Yeah, well, I'd start with the strip clubs."
Dex: "Cool. Alright man, let's go buy this drug lord a lap dance."

Dex: "Aight, let's go and swing by the strip club and wait to see who shows up."
Dex: "When we get to Manuel just let me do all the talkin' 'aight? I'd hate for us to fuck things up with the Columbians because you said some crazy shit that pisses him off."
Dex: "With Hector taken out, his brother Angelo is probably callin' the shots... lucky for us he doesn't have his shit together... it'll probably take him a while before he's got the crew organized enough to make a move on us..."
Dex: "If and when Angelo finally steps, he's gonna send Victor to do the job... now I know you think you're all badass and everything, but trust me Victor ain't no joke... you run into that asshole you make sure you got some serious back up."
Dex: "Okay, let's sit tight, Manuel should be here soon."
+Victor Rodriguez (translation): "No one messes with Los Carnales!"
-Victor Rodriguez (translation): "No one messes with Los Carnales!"
Victor Rodriguez (subtitle): "(Spanish)"
Victor Rodriguez (audio): "¡Nadie cruza a Los Carnales!"
Dex: "Fuck the Colombian, we gotta get outta here!"

Nice drivin', you saved our ass. 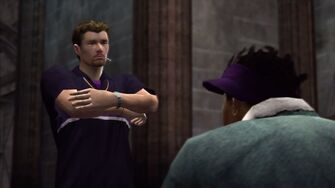 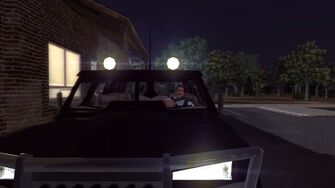 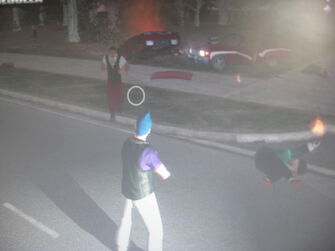 Victor Rodriguez on foot after his vehicle, a Bulldog, has been destroyed 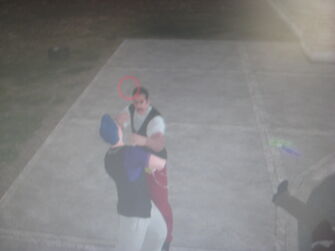 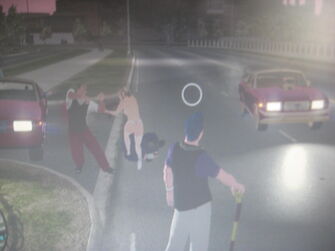 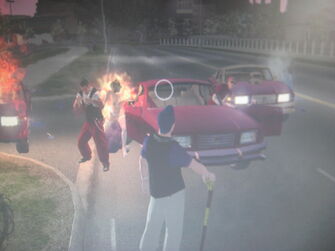 Victor Rodriguez is immune to fire 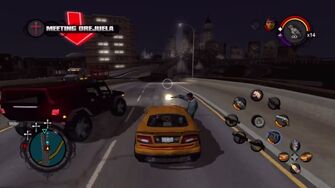 This article contains no references. See Help:Cite.
Retrieved from "https://saintsrow.fandom.com/wiki/Meeting_Orejuela?oldid=421515"
Community content is available under CC-BY-SA unless otherwise noted.