Lin is a character in Saints Row.

— Lin and Joseph Price, after the assault on Donnie's garage[3]

Lin is a lieutenant in the 3rd Street Saints and the self-proclaimed "best racer to ever come out of Chinatown".[3] A 25 year old female of Asian descent,[4][5] she has a somewhat cold personality, at one point showing little compassion towards killing two Westside Rollerz she had just been conversing with,[6] and at another throwing a man's lighter across the room after he offers to light her cigarette.[7]

Julius asks Lin to go undercover with the Westside Rollerz in an attempt to learn more about them and take them down from the inside[8] – much of the information she learns within the Rollerz she relays to Playa, and together they use it to foil the Rollerz' plans.[9][2]

Unsatisfied with her role and in an attempt to infiltrate the Rollerz further, Lin pursues a relationship with Donnie, a mechanic and best friend of gang leader Joseph Price.[10] She continues to deceive the Rollerz by working with Playa,[3][11] and these ill-fated attempts ultimately lead to her death when Price's uncle and financier, William Sharp, concludes that she has been betraying the Rollerz and has her killed.[12]

Lin is the first of four allies to die in the Saints Row series.

I asked Lin to hook up with the Rollerz. We don't know much about these fuckas, so I wanted one of us on the inside.

Playa first sees Lin in the Saints' church following the reclamation of Harrowgate (and with it the entire Saint's Row district); not content with Saint's Row, Julius assigns his lieutenants to work on removing each of the three enemy gangs from Stilwater. Lin, a lieutenant in the 3rd Street Saints, is asked by Julius to go undercover and infiltrate the Westside Rollerz in an attempt to bring them down from the inside.[13]

Playa somewhat assumes the role of being her handler, visiting her at secret locations to be updated on what she has learned. Lin first meets Playa at a parking lot outside the Ultor Dome and informs them of "a shipment of high performance cars [that] is coming in today". Lin has Playa hijack the delivery truck and deliver it to Samson, who outfits the vehicles with "a few surprises" before finishing the delivery.[9]

I don't like the idea of Lin going undercover, you roll with people long enough and pretty soon you start thinkin' like 'em...

— Troy, noting his concern about Lin to Playa.[2]

Later, at a nightclub, Lin reveals that there is an upcoming race and that the cars being used – the same cars that Playa stole – have been "rigged to blow once the engine reaches a high enough temperature": Lin requests Playa take part in the race and force the racers to use their nitrous, thereby activating the explosives. Fellow 3rd Street Saints lieutenant Troy, who is deeply concerned over Lin's well-being, helps out by taunting the Rollerz into activating their nitrous.[2]

Lin becomes frustrated with the slow progress she has made in the Rollerz and devises a plan to "get in good with Price's crew" by having Playa raid a garage; Lin shows at the last moment and drives the owner, Donnie, away before Playa reaches him. Lin knows that Donnie is close friends with the Westside Rollerz' leader, Joseph Price, and manipulates Donnie into thinking she has saved his life.[10]

Donnie gratefully takes Lin to meet Joseph Price, as well as Price's uncle William Sharp, who financially backs the gang. Lin utilizes her new position in the Rollerz to have Playa disrupt their plans regarding the collection of parts for an upcoming shipment.[3][11] During this time, Donnie bonds with Lin as they spend time together. After hearing of the Saints' recent actions, Sharp deduces that Lin has been betraying the Rollerz (as only Lin, Donnie, Price, and himself knew of the car parts collection) and promises Price that he will take care of it.[11]

Holding her captive at a local pool hall, Sharp forces Lin to phone Playa and lure them there. When Playa arrives, they fight towards where she is being held but they are knocked unconscious while trying to untie her from the chair.[14]

Lin was working with the Saints. Now would you give me a hand? This car is heavy... Donnie, where are you going?

— William Sharp's revelation to Donnie, following him shooting Lin and Playa with a .44 Shepherd.

Sharp ties up and incapacitates the two in the back of Lin's Voxel near the river, where he invites Donnie to reveal to him her betrayal. Lin attempts to explain herself to Donnie but is shot by Sharp wielding a .44 Shepherd. Donnie, shocked and heartbroken, leaves the scene. Sharp closes the trunk of the Voxel and pushes the vehicle into the river, submerging it. Lin finds her lighter but only manages to set Playa free before she drowns. Before she dies, Lin remarks on Donnie's words, "Did you hear that asshole Donnie? He said I was his girl".[12]

Following her death, Playa kills Sharp in retribution.[12] Soon after, Lin's body is found floating in the river in the morning.[15] After removing all enemy gang presence and claiming Stilwater for their own, Julius phones Playa and congratulates them for all they did. During the call, he briefly touches on the loss of Lin, saying that she was a soldier and that she knew the risk.[16] Donnie reclaims Lin's vehicle and, overcome with grief, mourns over her for the next several years.[16][17][18]

Lin in the final storybook of the game, playing volleyball with Oleg, Josh, Dane, Kinzie, and Gat.[19]

Lin drives a white Voxel with a blue stripe down its center in Saints Row,[9][10][12][16] which is unlocked in the Garage after completing "Semi-Charmed Life". Lin herself is never a Homie, but players must chase after her while she escapes with Donnie in her Voxel in "Guardian Angel"; during this mission, her vehicle can plow straight through other vehicles – even Peterliners on the freeway.

After completing the mission in which she dies, "Burying Evidence", the player can call Eye for an Eye (555-5966) to unlock Zombie Lin as a Homie.

Lin was to appear in Saints Row IV but was cut; she has a physical model, a Homie icon, and three Audio Logs, which are still accessible in the game data files.

3rd Street Saints gang member: "I didn't think the Rollerz pimped hos..."
Lin hits him and looks around
Lin: "Any other comments?"
Johnny Gat: "Yeah, when you punch, don't throw your shoulder so much..."
Lin: "Shut up, Johnny."


— Lin, during her first appearance in the church.[13]


— Lin, detesting the company of the Westside Rollerz.[9]


— Lin introduces herself to Donnie.[10]

Lin: "I'm Lin."
Donnie: "She totally saved my ass Mr. Sharp, she's a helluva driver."
Lin: "I'm the best racer that ever came out of Chinatown."
Joseph Price: "How come I've never heard of you?"
Lin: "Cause I got tits."
Joseph Price: "Is that what you call those?"
Lin punches Price
Joseph Price: "Suppose I deserved that."
Lin: "Yeah, you did."
William Sharp: "My nephew has a...unique sense of humor."
Lin: "That was supposed to be funny?"
Joseph Price: "I thought it was, until you hit me in the face."
Donnie: "Yeah, then it was hilarious."

William Sharp: "So your plan is to go steal cars. You really know how to think outside the box, Donnie."
Lin: "Don't talk to him like that."
William Sharp: "I'll take your advice to heart."
Lin: "It's not advice."
William Sharp: "A threat? How refreshing."
Lin: "Listen up, you--"
Donnie: "Lin, (stutters) don't worry 'bout--"
Sharp and Lin: "Shut up, Donnie."
William Sharp: "You were saying?"
Lin: "I was about to tell you to go fuck yourself."


— William Sharp and Lin, after Sharp forces her to lure Playa into a trap.[14]

Did you hear that asshole Donnie? He said I was his girl.

Jack Armstrong: "Jack Armstrong in the newsroom. The body of an unidentified female was discovered this morning along the shores of Stilwater Bay. Her body was badly bruised and her clothes were missing. Police are hoping that you can help identify her. All they have to go on is that she was estimated to be between 25 and 30 years of age, 5'3", approximately 105 lb, and was of Asian descent. If you have any information on this Jane Doe-san, please call the missing persons hotline at the Stilwater police barracks. From the newsroom, I'm Jack Armstrong."

Although ultimately not available in Saints Row IV, Lin has three Audio Logs that can be found in the game data files. Like many Audio Logs, the first two are a reflection on past events, allowing insight from her perspective. The third audio log references events that never happened in the game.

Putting me in the Rollerz was a smart move on Julius's part. We needed the intel, and I was the only tuner in the Saints. I knew when we staged that rescue at Donnie's shop I was in. Price owed me one for saving his best friend and didn't doubt me for a second. I probably should've been more careful about how often I passed the boss information, though...

I read Sharp wrong from the jump. I always knew he was coldhearted, but I just thought it was a lawyer thing. I didn't realize how sadistic he was. I'll never forget what he said to me: "I think it's time to unwrap you." I hope that bastard burns.

Donnie said I was his girl? Can you believe that? I mean, we were pretty close, but that never came up. We talked about engines, weight distribution, suspensions... But his girl? I never expected that. It was a nice surprise. 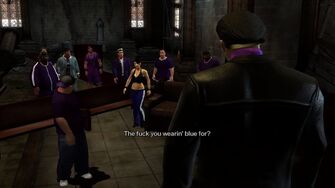 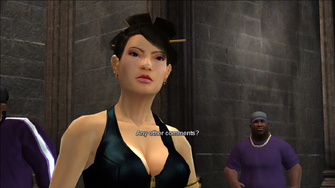 Lin, in her first appearance, close up in "Reclamation" 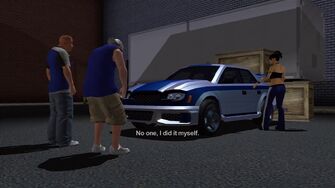 Lin, her Voxel, and the Westside Rollerz in "Stacking the Deck" 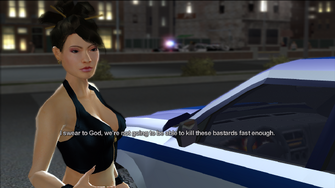 Lin in "Stacking the Deck" 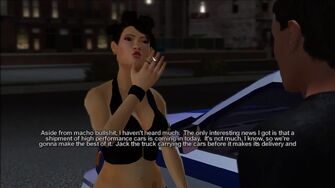 Lin, smoking, in "Stacking the Deck" 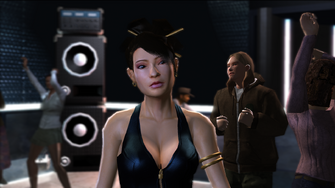 Lin meets Playa in a nightclub in "Samson's Surprise" 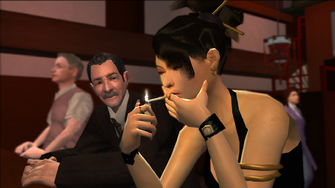 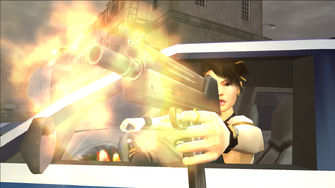 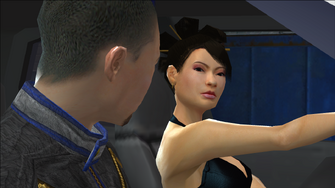 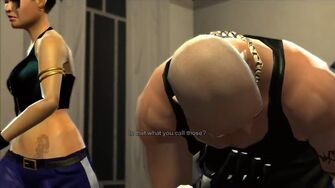 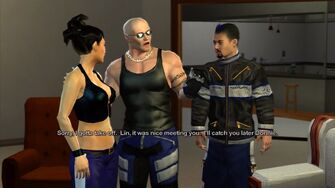 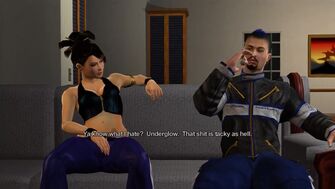 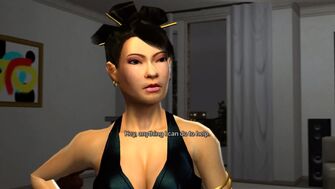 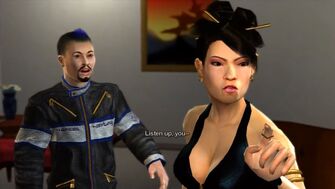 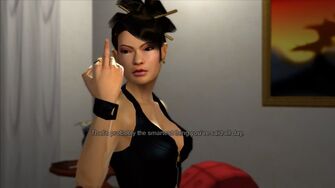 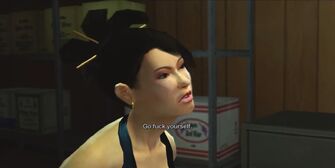 Sharp states that "it's time to unwrap you..." in "Liberation" 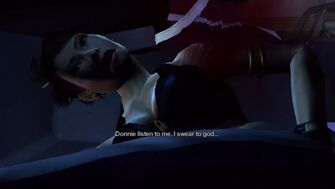 Lin, before she is shot by William Sharp in "Burying Evidence" 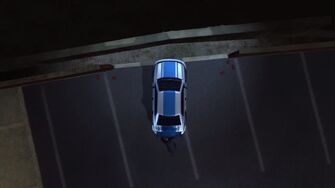 William Sharp pushing Lin's Voxel, with her and Playa inside, into the river in "Burying Evidence" 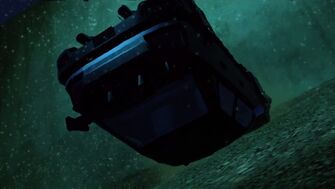 Lin's Voxel, underwater, with Lin and Playa inside in "Burying Evidence" 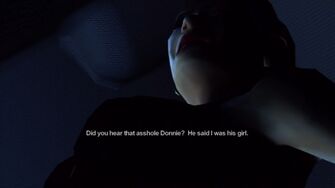 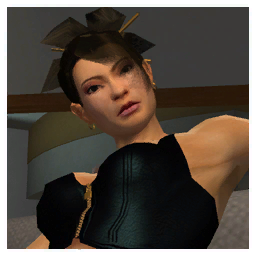 Lin's obituary on the Saints Row website; the dates were later removed

• List of Missions and Cutscenes to check
Retrieved from "https://saintsrow.fandom.com/wiki/Lin?oldid=423138"
Community content is available under CC-BY-SA unless otherwise noted.