Lil' Croaker is a Weapon in Saints Row: Gat out of Hell.[1] and the Plague of Frogs Pack DLC for Saints Row IV: Re-Elected.

The Lil' Croaker is an Explosive weapon, with one costume, named "Lil' Croaker".

Grenadiers use this weapon.

It is available in Saints Row IV: Re-Elected in the pre-order Plague of Frogs Pack pre-order DLC.

Clip Size, Hop Distance and Rate of Fire can be upgraded 5 levels each. The "Ultimate Upgrade" is Gimme Tongue.[2] 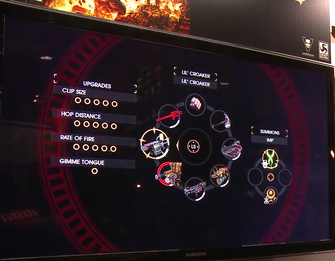 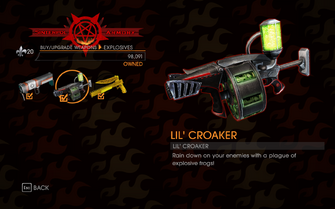 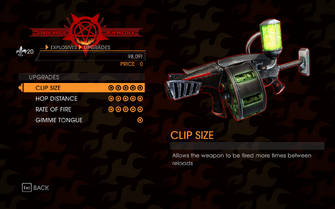 This article contains no references. See Help:Cite.
Retrieved from "https://saintsrow.fandom.com/wiki/Lil%27_Croaker?oldid=317782"
Community content is available under CC-BY-SA unless otherwise noted.