Letters to Santa are collectibles in How the Saints Save Christmas DLC for Saints Row IV.

There are total of 10 Letters to Santa from the surviving members of the 3rd Street Saints, which can be collected during the DLC missions.[1] After being collected, they can be read from The Ship computer.

You know I'm a man of few words and simple pleasures so I'll get right to it.

1. A few cases of Saints Flow. I'm not picky about the flavor, I like them all. Oh, I know, go for the variety packs!
2. A copy of all my commercials I did back on Earth. I'd like to have them for my portfolio just in case we come across some intergalactic talent agency that's looking for new up-and-coming onscreen actors. I know I'd kill it in outer space!
3. A full set of high-end recording equipment. You know, pre-amps, microphones, vintage Studer A-180 Reel to Reel Recorder, keyboards, etc. You'd think of being advanced alien technology they'd have good equipment but serious this Zin stuff is crap.
4. If anyone else asked for a life-sized Saints Flow can with arms and legs and stuff, DO NOT GET IT FOR THEM! They just want to put it in my bunk while I sleep so when I wake up I freak the hell out.

I think that's about it. I'm totally cool if I don't get all this stuff, so don't sweat it if you can't find the Saints Flow.

But item 4 is a must. Seriously, that's just not cool.

As I'm absolutely positive you would agree I've been "nice" this year I wanted to send you a list of desired presents I would love to find tucked under my tree come Christmas. Feel free to bring me as many of these as you would like, though the more you do the better I can continue to save the collective rear-ends of the Saints and humanity. Here they are, in no particular order.

1. Prototype computer processor capable of quadrillions of instructions per second (the government has one in a secret lab somewhere)
2. Neural interface for my laptop so I can connect it directly to my brain (also in a secret government lab, though I think it's a different lab)
3. Research on existence of alien technologies so I can compare it to the Zin tech (loop up Area 31, the secret government base that all Area 51 alien research was taken to after the public became too curious)
4. Nanite technology specs from the government's secret program on...

Ok, actually, I'll make this easier for you: if it's tech based and comes from secret government research labs that even the President doesn't know about, then I want it. I KNOW I can put it to better use than they've been since they couldn't even bother to stop the Zin from invading in the first place. Oh, and one more thing. A new leather harness and swing for...personal use.

In order to stop the Zin here and any that may still exist in the galaxy beyond our own solar system I require the following items:

If you're willing to throw a personal request in there I'd really like some ear plugs to keep Pierce's singing out of my head while I try to concentrate on my training.

To the one known as Santa,

If I have been informed correctly then you are willing to accept letters which dictate requests for gifts by those who believe in you. As I am one who believes in such a concept then I am sending you this list for the upcoming Holiday Season.

1. A robotic form complete with arms, legs, synthetic skin and fully functioning human anatomy
2. If option 1 is not possible, then the following would be acceptable substitues

a. A wider variety of attachable tools for my metal shell
b. A modular voice program so I may sound like any individual I wish
c. A detachable wireless camera so I may spy on any room in the ship undetected
d. Weapons of any kind so I may not feel as vulnerable
e. Fun Shaundi downloaded into my own memory matrix so I may have someone to talk to, even if only in my mind
f. Extra strength lubricant

Bring me the following

I know it's been rough for the human race right now, which is why I think sending this letter is so important. It reminds us all of the collective joy and happiness this time of the year brings, even to those who are facing as much adversity as we are.

So with that in mind I have a few things I'd like to request if you have the time to deliver them. If not, I understand, Santa.

- A nice fountain pen that's refillable
- A nice yellow scarf
- A tailored silk suit
- A box of cigars, I'm sure you remember my brand Santa

And that's all. I'm sorry I won't have the cookies you like from that corner bakery this year, but I hope you understand. Once we find a good kitchen and some supplies out here in space I'll see about whipping up a few batches of chocolate chip for you.

I know I wasn't always a "good girl" in the past, but I'd like to think I've changed for a better this year. Really hoping I made it onto the nice list, because if Pierce did and I didn't then I'd never hear the end of it. Plus I think you'll find my wish list to be rather short and totally in the spirit of the Holidays, so here it goes!

I wish for you to give my younger self the best Christmas she's ever had.

I know, not what even I expected to say but here's the thing; I never had a good Christmas after my family left as I'm sure you of all people know, Santa. I was either too stoned out of my mind or too busy being with awful boyfriends who never really cared.

I just thought it'd be nice for younger me to experience a good Holiday like she used to. After all, I was kinda mean to her when I found her in the simulation, but I've totally realized she's still a part of me that I needed to accept. And I know how much it would've meant to me to get gifts that didn't come from the gas station or some back alley light bulb.

So that's it. Just make her happy and I'll be happy.

P.S. Oh, and in case you didn't know, she's stuck in the simulation so you'll probably have to go in there to deliver the presents. Or get Kinzie to program them in. Either way works. Thanks!

If you find the time to stop by and drop presents off under our tree aboard the ship then I would really like the following items.

I'll make this simple. All I want this year is one thing: get me off this ship. Seriously, I signed up for 4 years as Vice President. This shit here is ridiculous.

You've taught me more about the Holiday Spirit then I've ever thought possible. Thank you. I'm new to this whole Christmas List thing, so bear with me.

1. Whatever Pierce wants, it'll make him happy, I'm good with that.
2. Whatever Shaundi wants, I'm sure she has her reasons so probably worth letting her have that.
3. Whatever Keith wants he's certainly worked to deserve, so that's good for him.
4. Whatever Ben wants is probably stuff most of us find boring, but if it makes him smile then go for it.
5. Whatever Kinzie wants I'm sure will benefit us all in the end, so I'm guessing we'd all like her to have it.
6. Whatever Gat wants give it to him. Trust me, it's easier that way.
7. Whatever Asha wants I'm sure she thinks is important and all, but make sure to throw in something nice and fun for her too. Maybe then she can relax a bit.
8. Whatever Matt wants I suppose it's ok to let him have. Just don't tell me what it is and I'll probably be happier that way.
9. Whatever CID wants...I'd probably check to make sure it's safe first. He has some odd tastes.
10. And for me, a pony. That's the standard first gift to ask for, right?

P.S. And I'm sorry I was such a Grinch (whatever that means as nobody bothered to explain it to me yet) and said "Fuck Santa" before. I didn't mean it. Well, I did mean it at the time, but now I don't. 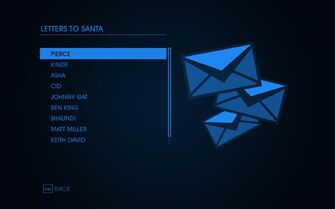 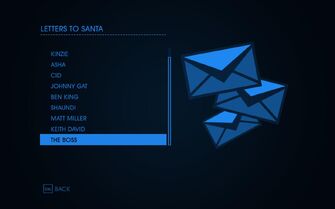 This article contains no references. See Help:Cite.
Retrieved from "https://saintsrow.fandom.com/wiki/Letters_to_Santa?oldid=408532"
Community content is available under CC-BY-SA unless otherwise noted.