Katie[1] is a character in Saints Row 2 and Corporate Warfare.

Right, so here's the thing, after like 2 years of doing laundry for my boss, he finally allowed me to cast tonight's episode of Fuzz.

Katie is a Caucasian woman with blonde hair. She wears a pink tank top and has a minor appearance in both Saints Row 2 and its second DLC, Corporate Warfare.

In Saints Row 2, Katie is the assistant of a FUZZ director, and after around two years of doing his laundry, she is finally allowed to cast one episode of FUZZ. However, the police officer who agreed to work with her got injured and was sent to the hospital. She saw Playa's mug-shot on the news and asks them to dress as a police officer and fight crime on camera.[2]

In Corporate Warfare, she is Dex's secretary and is at Wardill Airport when Dex is leaving the city in a rush to get away from Playa.[1] Katie has matured somewhat, but has the same clothes and hairstyle.

Dex: "Is everything in order, Katie?"
Katie: "Yes sir, your effects are en route."
Dex: "And my office?"
Katie: "I followed protocol; your machine's been wiped and paper files have been shredded. Are you sure you can't wait a few days? You're going to miss the company picnic." 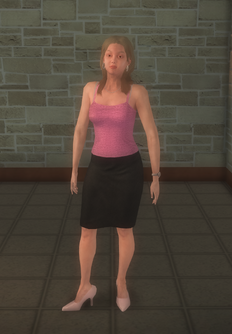 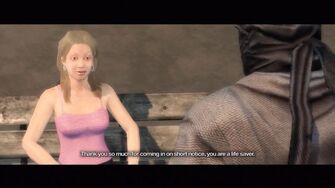 Katie in the opening cutscene of FUZZ in Saints Row 2 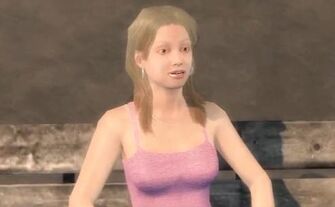 Katie in the opening cutscene of FUZZ in Saints Row 2, close up 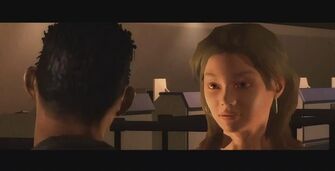 Katie speaks to Dex in the closing cutscene of "Corporate Meltdown" in Saints Row 2: Corporate Warfare

Katie in the closing cutscene of "Corporate Meltdown" in Saints Row 2: Corporate Warfare" 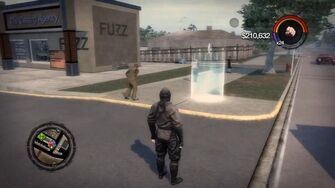 Retrieved from "https://saintsrow.fandom.com/wiki/Katie?oldid=423152"
Community content is available under CC-BY-SA unless otherwise noted.