Price runs the Westside Rollerz alongside his uncle, William Sharp.[4] Price serves is the brawn, while Sharp is the brains of the operation, who makes the plans.[5] After his uncle's death, Price takes full control of the Rollerz.[6]

After The Protagonist kills his uncle in retaliation for Lin's murder,[6] Price takes over the Rollerz and immediately seeks revenge for his uncle's death. He commands most of the Rollerz' forces to attack Saint's Row, trying to burn it to the ground.[7] However, the Saints resist the invasion and wipe out Price's thugs,[3] with Price only barely being able to escape.[8]

Soon after, the Saints attack Price's mansion and take control of it, prompting a furious Price to call The Protagonist and challenge him to a one-on-one duel outside Foreign Power. However, when The Protagonist shows up to the meeting, Price ambushes him by trying to run him over with a Goliath truck and by having the few remaining Rollerz attack The Protagonist. After killing the Rollerz, The Protagonist chases after Price and attacks his truck, eventually causing Price to lose control of it. Price's truck explodes after he crashes, killing him in the process.[2] 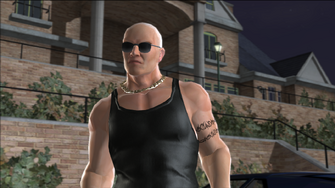 • List of Missions and Cutscenes to check
Retrieved from "https://saintsrow.fandom.com/wiki/Joseph_Price?oldid=311731"
Community content is available under CC-BY-SA unless otherwise noted.