Jenny is a character in the Gangstas in Space DLC for Saints Row: The Third.

Oh my God are you kidding me? My first feature and I'm starring opposite the leader of the Saints!

Jenny is an actress who plays Kwilanna in the film Gangstas in Space, and is dressed as Kwilanna at all times, even when called as a Homie.

Jenny introduces herself while Playa reads the script for Gangstas In Space. Director Andy Zhen arrives shortly after and yells at her, assuming she's an extra and wondering aloud why she is speaking to him. He is annoyed to find she has a lead role even though she is not famous like Playa.[3] During the movie, Zhen starts going harder on her. He calls her acting amateurish and horrible, blames her lack of skills and takes her to task for not achieving impossible feats (such as jumping a ravine much-too wide to cross, and dangerous). All the while Zhen ignores Playa's admittedly horrible acting, and mistakes such as wooden delivery and breaking character, enraging Jenny more. Playa takes a liking to her, complimenting her on her acting and other various skills, listening to her and telling her she needs to stand up for herself.[4]

Under Zhen's continued cruelty and Playa's encouragement, Jenny starts to turn violent and attacks several actresses hired to replace her. This goes further when she and Playa realize with angry disbelief that Zhen has no problem endangering and killing extras for the sake of the movie. After she and Playa are nearly killed by one of his stunts, Jenny finally snaps and kills the director by flying the Aegean into him and impaling him on the nose of the craft. Though Playa is alarmed by this turn of events, as Jenny explains it she is "just doing what [Playa] told [her]."[5]

She is unlocked as a homie after the DLC is completed, and remains dressed as Kwilanna when called upon. She arrives in a standard Saints vehicle.

Jenny plays Princess Kwilanna in the Gangstas in Space film. She appears in the Saints Row: The Third DLC, Gangstas in Space. Initially, she has been kidnapped by the human military and must be "rescued" by Playa. During the film, it is revealed that Princess Kwilanna has defied her people to aid Playa in warding off an alien invasion, saying that "they made their choice and [she] made [hers]."

Indeed, Kwilanna fights against her Space Amazon sisters and aids in the theft of an "alien" spacecraft, the Aegean. The character of Kwilanna is also revealed to be relatively tech-savvy as the film shoot progresses, disarming computer obstacles with code in several instances while Playa chooses to simply blow them up.

As the DLC progresses, it is perhaps arguable that Kwilanna's ambivalence about her people in the script roughly parallels Jenny's uncertainty and increasing upset over Andy Zhen's project.

Normally Jenny is friendly, polite, and respectful to others. She is at first somewhat in awe of being slated opposite Playa in Gangstas in Space, even as Playa admits they will "need cue cards like a motherfucker" to get through their part of the filming.

Unlike Playa, Jenny is a skilled actress who follows the script and usually only breaks character when Playa does. Despite her obvious talent and dedication, she doesn't seem to have much confidence in her abilities. However, she blossoms under Playa's encouragement to take what she wants and stand up to Zhen when he unfairly criticizes her acting while praising Playa's terrible work. She also has a surprisingly violent temper which causes her to lash out when pushed too far, to the point of murder. Her violent outbursts have also apparently caused her some legal trouble in the past.

Following the events of Gangstas in Space, when called up as a homie Jenny frequently comments on her new bold and carefree attitude, saying "Who knew I had this little ball of murderous fury in me?" and "Who needs an acting job when I've got the Saints?" She appears to enjoy watching Playa commit property damage and is quite excitable when called up on the phone for a mission. Though her acting career with Andy Zhen is finished, Jenny seems to look forward to her future among the Saints. 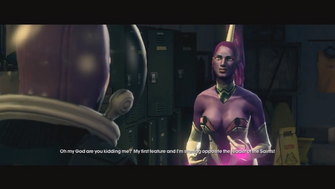 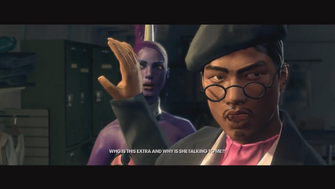 Jenny piloting the Aegean in "That's Not in the Script!" 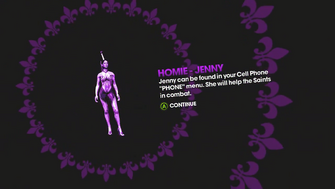 Jenny unlocked as a Homie after completing the mission "That's Not in the Script!" 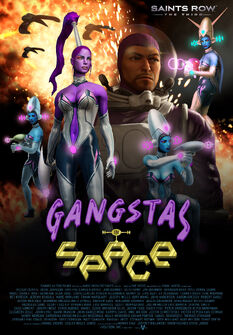 Jenny (foreground left) in a promotional image for the Saints Row: The Third DLC, Gangstas in Space. At the bottom of the image, her forename is misspelled as "Jenni" 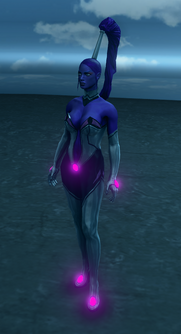 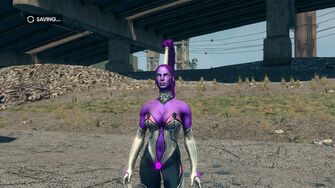 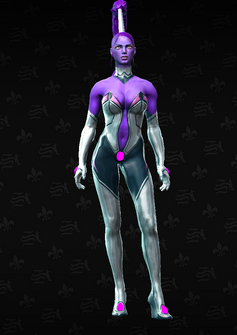 This article contains no references. See Help:Cite.
Retrieved from "https://saintsrow.fandom.com/wiki/Jenny?oldid=422835"
Community content is available under CC-BY-SA unless otherwise noted.