It's been a while. You look good.

Jane is a radio news reporter. She delivers the final news report of the game.[5]

Jane is both a TV and radio news reporter.

She reports on Johnny Gat's trial,[6] interviewing Troy Bradshaw after Playa, Johnny and Pierce rob Poseidon's Palace,[7] and then again after Troy Bradshaw is forced by Dane Vogel to free several Brotherhood members from incarceration.[8]

To make people more focused on her during her report, she pays Playa to cause mayhem in various neighborhoods throughout the city.[9] She has loathing for a lawyer named Zach Johnson, whom she says stole her footage time.

She is prominent in the Saints Row 2 DLC Ultor Exposed in which Playa contacts her in doing an interview with Tera. Both Playa and Tera go through a lot to get the bodies[10] and chemicals[11] as proof to Ultor's wrongdoings. But, when time to do the interview, Jane twists Tera's words to make it look like she is the one responsible, humiliating Tera on TV. Once the cameras stop rolling, Jane gives a subtle hint that she was paid off[reference?] and states her reasons that Ultor would've buried the story regardless and that Tera can try her little revenge without them. A furious Tera vows she will.[12]

Though looking remarkably different, Jane's new job in Steelport is basically the same as her job in Stilwater, reporting on the aftermath of Playa's mayhem and destruction during missions, although this time far more frequently, reporting her "regular scheduled radio programming" after every mission completed by Playa.

Jane is present when Cyrus Temple offers to answers questions on the newly arrived STAG in Steelport. He goes on to tell the story of the death of Jessica[13] in order to sway Jane, who questions whether STAG's presence would truly make Steelport's citizens safer.[4]

Jane later gives an interview to Luchadores leader Killbane who set up the 3rd Street Saints over the destruction of the Hughes Memorial Bridge in Stilwater.[14] Playa and Shaundi arrives to kill Killbane, and Jane tells them that Killbane has ran off and anxiously asks Playa if they are mad about her interviewing Killbane.[3]

Jane is abducted by Zinyak before the Earth is destroyed, and serves as the DJ for 97.6 K12 FM within The Simulation. She is also featured on Klassic 102.4 when made to read from Shakespeare by Zinyak, which she delivers in the same tone as her newscasts.

In Saints Row (along with Jack Armstrong), Saints Row 2 and Saints Row: The Third, Valderamma gives news reports on the radio after completing certain missions, often summarizing the events of them. In the latter game, her newscasts tend to be around 45 seconds long and play immediately after getting into a vehicle following completion of a mission. Certain newscasts are followed by adverts for episodes of Nyte Blayde. Unlike Saints Row 2, Valderamma's newscasts play over the Mixtape, although changing the radio station back and forth stops it.

The spelling of Jane's surname varies.

When recruited as a Homie she often comments as if doing a newscast, and sometimes says "I've never been an embedded journalist before" when calling her on the Cellphone.[replace with actual quote]

During music breaks on the 97.6 K12 FM radio station, she makes comments regarding her anger and resentment towards Zinyak.[replace with actual quote] 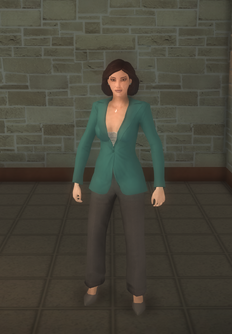 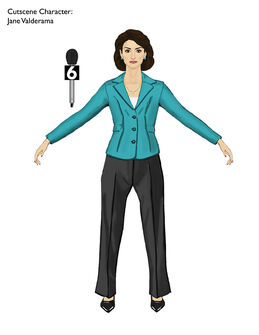 Jane in front of Poseidon's Palace 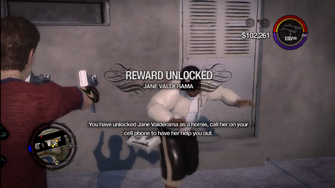 Jane when called as a Homie in Saints Row 2 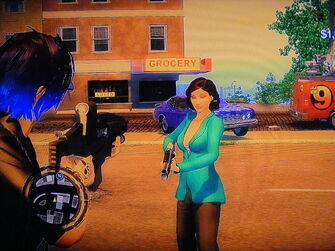 Jane as a Homie in Saints Row 2 with a Tombstone 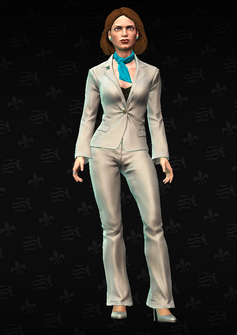 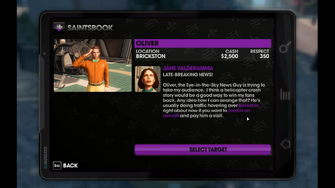 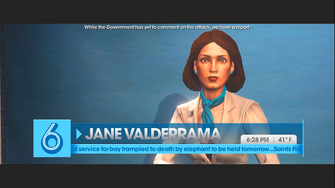 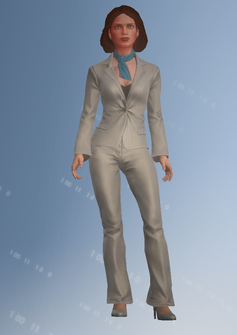 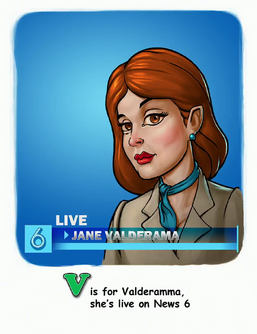 Jane featured under V in The ABCs of Saints Row

• List of Missions and Cutscenes to check
Retrieved from "https://saintsrow.fandom.com/wiki/Jane_Valderamma?oldid=422789"
Community content is available under CC-BY-SA unless otherwise noted.