"Jail Bait" is the eighth mission of The Brotherhood story arc in Saints Row 2.

Continuing on from the events of the previous mission,[1] the Stilwater Police Department are preparing to release several members of The Brotherhood.[2]

Playa manages to destroy all the vehicles transporting the soon-to-be-free members of the gang before they reach their drop-off points. Maero returns to the Phillips Building and attempts to threaten Dane Vogel into helping him again, but Vogel rebukes him and shows his hand: a group of Masako armed with assault rifles. Maero notes that Vogel's security guards look more like a private army, foreshadowing later events[3], but nevertheless leaves. Vogel warns Maero he'll have him shot on sight if he ever returns, and also adds that Ultor has taken control of the boat carrying Maero's shipment. As Maero leaves, he states that the boat will "never [...] make it to shore."[4]

The objective of the mission is prevent three buses and four boats loaded with prisoners from reaching their drop-off points to release them.

Destroy the three prison buses before the Brotherhood are released

Start by taking down the convoy of three buses nearby. Each bus behaves erratically and attempt to drive away once it is shot, so concentrate on taking them down one at a time. A sufficient amount of ammunition brings each vehicle down quickly - to save time, ignore firing on the Five-Os and each bus when it bursts into flame, as it explodes shortly thereafter. Destroying all three buses gives the 3 units of The Brotherhood Notoriety and at least 2 of police Notoriety, and using Forgive and Forget may make the mission a bit easier.

After answering the phone call, there is now a choice between using a Miami boat nearby or a Wolverine fighter plane at Wardill Airport. Although the Wolverine fighter may sound interesting, it certainly makes the mission more challenging due to its loose controls and the difficulty of accomplishing strafing runs on the boats. Furthermore, it only takes one accurate rocket from the RPG Launcher to instantly kill Playa inside the Wolverine.

Regardless, the enemy boats go down even quicker than the buses due to their low health and the little cover available in the open sea.

Once the four boats have been destroyed, the mission ends.

Jane Valderamma: "Today members of The Brotherhood who were released from prison found out that while the law aquitted[sic] them, justice is a blind and spiteful whore. As the newly released men and women were being driven to be released, the leader of the Third Streets[sic] turned these vehicles of deliverence[sic] into municipal coffins. I'm Jane Valderamma, channel 6 news."

Jane Valderamma: "In a surprising turn of events several members of The Brotherhood are being released today."
Jane Valderamma: "A previously thought open/shut case turned into a fierce legal battle as several high power attorneys fought tooth and nail for their client's freedom. Curious about the court proceedings, I spoke to Chief of Police Troy Bradshaw."
Troy Bradshaw: "My personal opinion on the trial doesn't really matter, they were found innocent by a jury of their peers."
Jane Valderamma: "So you think they were guilty."
Troy Bradshaw: "I'm sorry Jane. Listen, I have to get back to work...hey, why don't you try talking to Dane Vogel."
Jane Valderamma: "Mr. Vogel, what's Ultor interest in the trial?"
Dane Vogel: "Ultor has no interest in the trial other than to see criminals get put behind bars."
Jane Valderamma: "So there is no truth to the speculation that the Brotherhood's lawyers are in Ultor's pocket?"
Dane Vogel: "Jane, we've donated millions of dollars to the Stilwater PD as well as rebuilt the shattered community of Saint's Row. I understand that everyone likes to pick on the big corporations, but this latest groundless attack on Ultor's integrity is just ridiculous."
Jane Valderamma: "Behind me the men and women loading up onto these buses are being given another chance at freedom...but the question remains, are we also giving them another chance at a life of crime? I'm Jane Valderamma, Chanel 6 News...back to you Jack."

— Phonecall after destroying the buses

Jaime: "Mr. Vogel, Mr. Maero is-"
Maero smashes through the door
Jaime: "See...you..."
Dane Vogel: "Thanks for the heads up Jaime."
Dane Vogel: "Is there something I can help you with?"
Maero: "They hit my boys when they were on the prison bus."
Dane Vogel: "Between your girlfriend and your gang, I'd say you're a magnet for tragedy Maero."
Maero: "You think this is fuckin' funny?"
Dane Vogel: "No, but I do think it's your problem."
Maero: "My problems are your problems...or do you need some fresh air to remind you."
Dane Vogel: "No, see my problem is that a sideshow freak is messing up my paper work...your problem is that there's a group of security guards with assault rifles pointed at your back."
Maero: "Your security guards look more like a private army."
Dane Vogel: "Call 'em whatever you want, the point is that they have big guns. I'm sorry you couldn't protect your friends, I really am...but Ultor is done doing you favors...come back here again and I'll have you shot on sight."
Maero: "Go fuck yourself Vogel."
Dane Vogel: "I've enjoyed our time together too ...but I think it's time to move on. Gentlemen, could you please show our guest out?"
Dane Vogel: "Oh, and Maero...don't worry your little shipment. Ultor has already appropriated it."
Maero: "What did you say?"
Dane Vogel: "Ultor security has taken control of the boat carrying your goods...it only seemed fair that we get compensated for letting your boys out of jail. You can go now."
Maero: "That boat is never gonna make it to shore."
Dane Vogel: "Goodbye Maero." 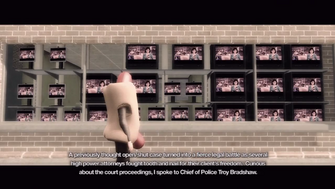 Playa happens upon a newscast by Jane Valderamma, where they learn of what's to happen 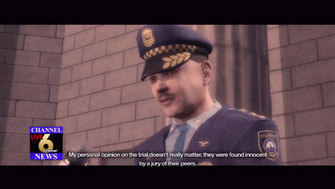 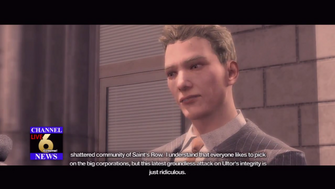 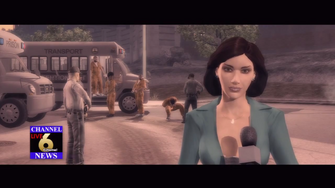 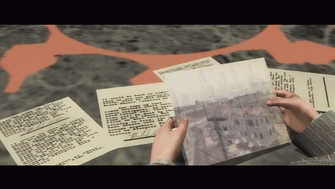 Dane Vogel, with an overlay on a photo of Shivington, hinting at his future plans for the neighborhood 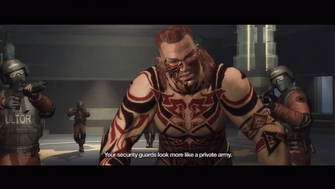 Maero attempts to threaten Dane Vogel again, but is pushed back by the Masako, Ultor's elite security unit 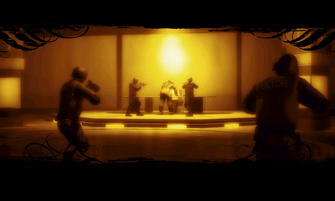 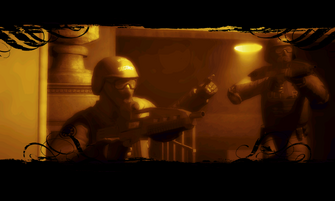 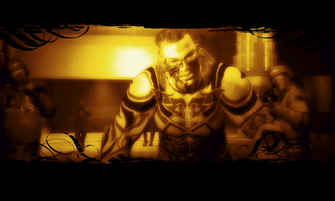 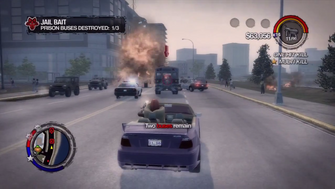 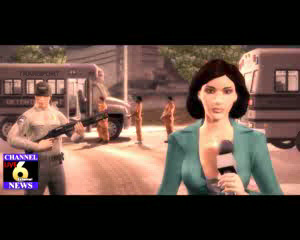 Screenshot of video file of Jane Valderamma presenting the newscast

This article contains no references. See Help:Cite.
Retrieved from "https://saintsrow.fandom.com/wiki/Jail_Bait?oldid=425162"
Community content is available under CC-BY-SA unless otherwise noted.