The Invincible Pack is a downloadable content in Saints Row: The Third.

More cheats than you'll know what to do with. Never worry about dying or running out of ammo! Unlock the Get Down Cheat that makes you ultra limber. Super Saints gives you better guns and better health while Ultimate Clip ensures that you're always ready to fire. Get Infinite Mass for your vehicle plus Super Explosions and you'll be ready for anything!

The Invincible Pack adds seven cheats to the game. Can be purchased via PSN, Xbox Live, and Steam, for $2.99.[1]

The majority of the cheats from this DLC can be done in the core game:

If any of the cheats are enabled all achievements and trophies will be disabled.

Some of the above descriptions are not entirely clear on what they do: 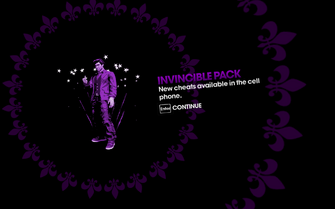 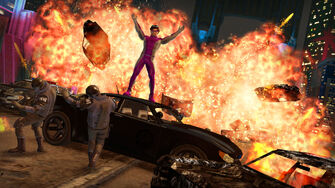 This article contains no references. See Help:Refs.
Retrieved from "https://saintsrow.fandom.com/wiki/Invincible_Pack?oldid=405958"
Community content is available under CC-BY-SA unless otherwise noted.