The Hurricane is a vehicle in Saints Row 2.

The Hurricane is the fastest boat in the game, and is one of the fastest vehicles overall. The Hurricane seats two passengers, and because it has an enclosed cabin, it is not possible for either to use weapons while inside it.

As this boat is not available at Ship It, is not unlockable, and is not featured in any missions, it is one of the rarer vehicles of the game.

There is an equal chance between:

There 4 variants which feature different sponsor color schemes and logos that appear on the craft's body and pontoons: 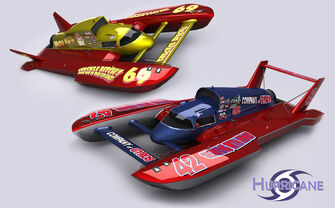 Promo image of the Hurricane

Friendly Fire Hurricane with round intake and rear spoiler

Company of Gyros Hurricane with square intake and rear fins

Company of Gyros Hurricane with wide intake and rear spoiler 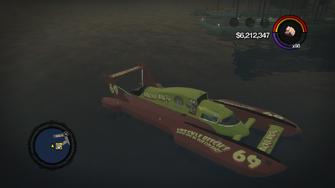 Retrieved from "https://saintsrow.fandom.com/wiki/Hurricane?oldid=424454"
Community content is available under CC-BY-SA unless otherwise noted.