Accuracy and Damage Upgrades both have 5 levels to be purchased. A separate Longshot "Ultimate Upgrade" is available; this upgrade will make the weapon's damage increase with distance.

The Heavy Minigun works much like its Temporary Weapon variant, boasting an extremely high fire rate and high damage. It does not limit The Protagonist's mobility and can have its accuracy and damage upgraded, and has the Longshot upgrade for dealing more damage at range, giving it great versatility in the diversity of enemies that can be engaged effectively. The Heavy Minigun can also engage tanks such as Destructors as the bullets are able to damage them, combined with its very high damage per second in conjunction with Super Powers, the Heavy Minigun is one of the most effective "special" class weapons against Destructors.

It does have an issue in terms of of ammo consumption and is one of the worst weapons in the game for keeping supplied if relied on due to it's extremely high fire rate and finding ammo outside the Weapon Cache or Friendly Fire is unlikely due to its special weapon class designation. The Heavy Minigun is always held in an aiming stance, so players that carry the weapon constantly equipped and makes use of Homies will likely make their allies attack targets without intention due to The Protagonist aiming at them. This is rectified by keeping the weapon holstered, but this will require The Protagonist to set the gun up when equipped and can make The Protagonist stop.

The Heavy Minigun is comparable to the 'Merica gun. Both have their advantages and disadvantages with their own special traits. Both can deal extremely high damage per second and eliminate a wide range of targets very quickly. The differences is that the Heavy Minigun has less recoil and muzzle rise, is relatively inexpensive to upgrade, and can also damage tanks which is something the 'Merica is incapable of doing, even though 'Merica has a rocket launcher. 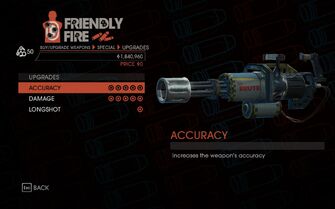 This article contains no references. See Help:Cite.
Retrieved from "https://saintsrow.fandom.com/wiki/Heavy_Minigun?oldid=324647"
Community content is available under CC-BY-SA unless otherwise noted.