He Lives is a mission in Saints Row IV.

Upon re-entering Simulation 31, there is an announcement that Keith David is making a speech at the PR Center, and all those residing in the simulation are required to attend. Upon arriving, Playa finds Keith making a speech praising Zinyak to the simulated residents of Steelport. After verbally confronting Keith David, he reveals that he betrayed Playa and joined Zinyak because he was told that, by doing so, Zinyak would restore the Earth. After this, everyone listening to his speech becomes hostile. Playa pursues Keith throughout the STAG PR Center, until he is ambushed by two Zin who pummel Playa while Keith watches. Eventually, Keith can't bare to watch his friend get hurt, and kills both of the Zin and attempts to escort Playa out of the PR Center. However, before he can do so Zinyak himself shows up and traps Keith David in his very own nightnare simulation for betraying him.

In Keith David's simulation, there is sound of bagpipes in the distance, and after traveling along some alleyways, Playa finds Roddy Piper battling Keith David. Keith David escapes Roddy using a Super Jump, and Roddy then tells Playa that Keith's mind is being controlled by a satellite placed on the rooftop of the building they were fighting next to. Playa agrees to help Roddy and the two fight their way to the top of the building to destroy the satellite. After killing the CIDs guarding the satellite and destroying it, Roddy tell Playa that it's "No good, I'll have to beat it out of him." He then proceeds to beat Keith to a pulp, which actually breaks the mind control and Keith is freed from his simulation. After Keith regains consciousness, Roddy mysteriously dissappears, Keith claiming that he only arrives where he is needed most. Keith is then unlocked as a Super Homie, and Roddy Piper is unlocked as a Homie.

Ultor Announcer: "You are cordially invited to the swearing in of Super President for Life Keith David today at the Federal Building."
Ultor Announcer: "Attendance is mandatory. Have a nice day."

Keith: "My fellow Americans. I know first hand what this war with the Zin has cost us. How many more need to die before we realize that the time has come for us to put aside our pride and focus not on division, but unity?"
Keith: "Does Zinyak have a strong personality? Absolutely, but then again, so did the previous President. And you know what? When I look at the two of them I see more similarities than differences."
Keith: "Both have proven leadership experience. Both maintain their composure in high pressure situations. Both have a love of Jane Austen."
Keith: "But most importantly both of them will not stop until they get what they want."
Keith: "For this war to end, we need to stop rattling sabers and realize that victory doesn't come from annihilating an enemy, but by making an enemy your friend."
Keith: "All of us are heroes in our own stories...the time has come for us to grow up and have perspective. Earth will have its salvation, but it will come on the back of humility, not violence."
Playa: "Cute speech. Where's the part where you talk about selling out humanity?"
Keith: "Humanity? Do you mean the 9 of us? Earth is gone because you provoked a madman."
Playa: "I trusted you, Keith."
Keith: "And I trusted you. The country trusted you. And look where that lead us."
Playa: "So what, you're putting your faith in Zinyak? Giving up your free will to be ruler of some bullshit day dream?"
Keith: "You don't get it. Zinyak said he can restore Earth...all I have to do is kill you."
Playa: "He's lying to you."
Keith: "Maybe. But there's billions of lives at stake...if he's telling the truth, what's one life for the greater good."
Playa: "You sound just like Julius."
Keith: "He was right."

Playa: "Keith, I think you have some unresolved issues."
Keith: "You don't know the half of it, kid. Now come on, we've got to save Kinzie."
Playa: "Wish we could call Roddy for help."
Keith: "No one calls Roddy for help..."
Keith: "He shows up where he's needed most."
Keith: "Let's go."

Ladies and gentlemen of America, the threat is right in front of us. An alien presence has taken over your friends and family. It's everyone you know, everyone you see. Nobody can be trusted. Least of all the leadership of this country.

Well, prez, we got visitors.

Matt Miller: "Keith David is headed into that building! Hurry!"
Playa: "There's a crowd protecting it. I have to get through them first."

Let him go. They have him bad.

Keith David: "Soon, the whole world will know the truth!"
Roddy Piper: "The satellite is what's controlling Keith. You take care of it, I'll handle him."

Playa: "The satellite's down! Did it work?"
Roddy Piper: "No. The brainwashing is too ingrained. I'll have to beat it out of him."
Roddy Piper: "If you want to know where your friend is, now's the time."

You did it! The shield's down.

He's heading for the roof! 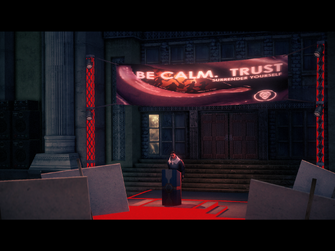 Keith David making his speech at the PR Center 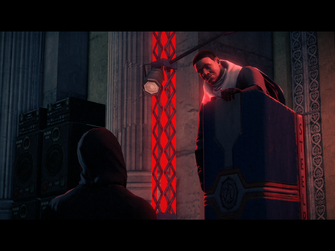 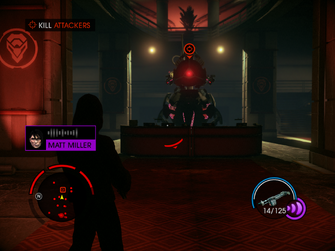 Playa having to fight off a Marauder and other Zin 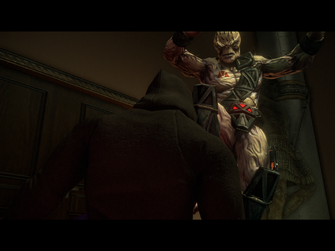 A Zin Soldier beating down Playa 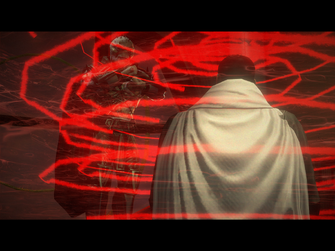 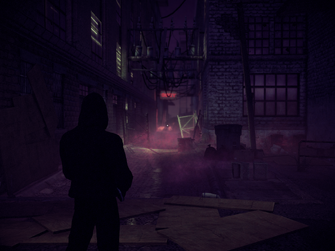 Playa waking up with no contact from the Saints or Keith 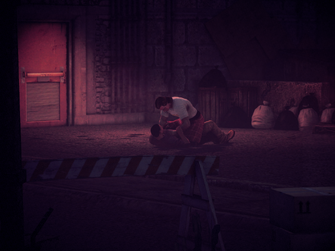 Keith David and Roddy Piper fighting one another 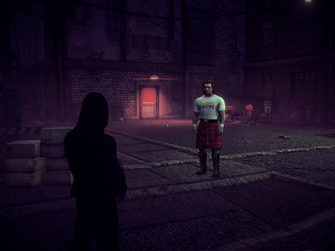 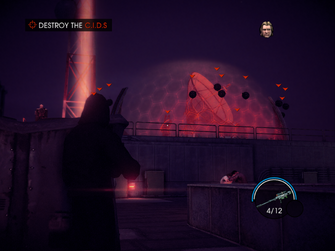 The C.I.D.s that protect the Satellite 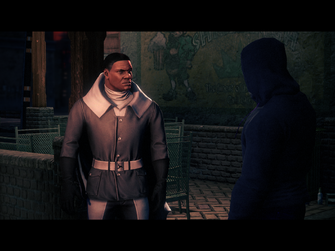 Playa and Keith David having a discussion about the recent events 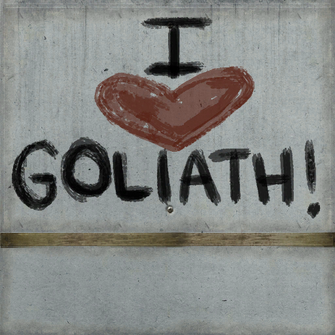 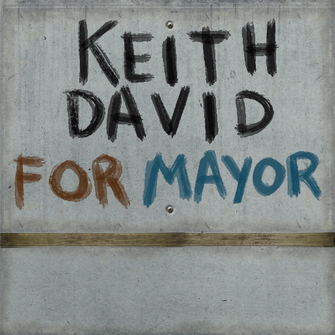 This article contains no references. See Help:Cite.
Retrieved from "https://saintsrow.fandom.com/wiki/He_Lives?oldid=421565"
Community content is available under CC-BY-SA unless otherwise noted.