"Hail to the Chief" is the penultimate mission in Saints Row.

Marshall Winslow was a major public figure, and you can bet your ass that people would ask questions if the Chief of Police wasn't at his funeral. I say we hit Monroe during the funeral procession. That should show whoever he's working with that we're not fucking around.

— Dex to Johnny Gat and Playa, at the church.

While Johnny Gat, Dex, and Playa discuss Julius' fate over at the church, they receive a phone call from Chief Monroe, who has decided to renege on letting Julius go until the 3rd Street Saints do more "community service" for him. Dex quickly formulates a plan and decides to assassinate Monroe at Marshall Winslow's funeral, which he is sure to attend, thereby sending a message to "whoever he's working with" that they're not going to be used.[1]

Dex gives Playa a McManus sniper rifle to snipe Monroe, but the plan goes slightly awry when there is more than one Five-O in the funeral procession and they cannot tell which one Monroe is in. Gat decides to blow up all of the police vehicles with the RPG Launcher, and Dex and Playa follow suit, knowing that Monroe must be in one of them. While Gat stays behind on the rooftop to continue killing oncoming policemen and the FBI, Playa and Dex flee to a nearby Forgive and Forget, having succeeded in their plan to kill Monroe.

They'll be scooping Monroe up for weeks.

While waiting for Julius to return, Johnny, Dex, and you received a call from Police Chief Monroe saying that there was more he needed done before he could let Julius go. Tired of taking orders from Monroe, the decision is made to take him out during the funeral procession for Marshal Winslow. You and Dex headed into the city to snipe Monroe, but Johnny showed up with a rocket launcher and blew your cover. Deciding it was pointless to hide anymore, the two of you joined Johnny in the mayhem, eliminating the crooked cop in the process.

Go to the rooftop with Dex.

Although this is only the penultimate mission, it is the final mission of Saints Row that has any gameplay, so players should stock up on food, weapons/ammo, and anything else they feel they might need before starting.

Destroy all police vehicles in the funeral procession.

After arriving outside what will one day be the Rounds Square Shopping Center,[2] Dex gives the player a McManus with six rounds. When the funeral procession comes nearby, Johnny fires an RPG at it; follow his lead and do the same, destroying all marked vehicles along with an Oppressor.

Go to Forgive and Forget.

Now begins the final part of the mission, and it can be very tough: players must reach a Forgive and Forget with full police Notoriety. The one downtown is marked on the HUD, but players may want to drive to the one in the Suburbs District to the southwest as it's a slightly easier drive.

Regardless, what makes this so difficult is the relentlessness and aggressiveness of the FBI vehicles - they constantly ram into Playa's vehicle, causing them to spin wildly out of control or off the road, and their speed can match the fastest of cars. Players may have to swap cars during the drive as the FBI can inflict massive damage on a vehicle fairly quickly, so if this happens, stop the vehicle before exiting, and before it bursts into flames. Diving out of a moving vehicle or exiting near a SWAT Peacekeeper leaves Playa very exposed to being busted, which can be a serious problem for the unprepared. When in a new vehicle, don't forget to pick up Dex, but be careful not to get busted while sitting motionless in the vehicle.

Alternatively, one can hijack a Peterliner off the freeway on the way over and park it nearby for use as a getaway vehicle: its size and durability should let the player plow through the FBI with relative ease.

A keen awareness of one's surroundings is imperative, and the player needs some good amount of luck, but should the likely vehicle transition go smoothly, getting to a Forgive and Forget shouldn't be too much of a problem. The mission ends when the player drives through the confessional, and they are rewarded $5,000 cash.

The player can fail the mission by getting Smoked, getting Busted, or abandoning/killing Dex.[3][4]

Jack Armstrong: "This just in to the newsroom, we're just now getting word of an apparent attack in the vicinity of the motorcade and funeral procession of the late Marshall Winslow. With a report, we go to Jane Valderamma at the scene."
Jane Valderamma: "Jack. As I stand here, a good distance from a series of now burnt-out limousines and police cruisers, the scene is unlike anything I've ever witnessed before. The smell of smoke and fire, the sound of rescue vehicles and personnel vainly attempting to find survivors... the bottom line, Jack, is that Police Chief Monroe, and other high-ranking police and City Hall officials, are dead. This is not a simple exchange of gunfire - this appears to be an act of war. The entire funeral procession was targeted by a group of persons unknown and more than half of the vehicles were destroyed. Witnesses I've talked to who were lining the streets to pay their last respects to the late Marshall Winslow described the incredible noise and the extreme precision with which each rocket found its target. Jack..."
Jack Armstrong: "I'm sorry, Jane. Are you confirming that Chief Monroe has in fact been assassinated?"
Jane Valderamma: "I am, Jack. About ten minutes ago I watched as a gurney carrying the chief's badly-burned corpse was loaded into the back of one of the first ambulances to arrive at the scene. Reporting live from the Winslow funeral procession, this is Jane Valderamma. Back to you, Jack."
Jack Armstrong: "Thank you Jane, and stay safe. As we get details on this horrific story we will bring them to you immediately. In the newsroom, I'm Jack Armstrong."

Johnny Gat: "Did you handle it?"
Johnny Gat: "Where the fuck is Julius?"
Dex: "Have you heard back from Monroe?"
Chief Monroe calls
Chief Monroe: "Nice work...but I don't think I can let Julius go until you do a little more community service ...we'll be in touch."
Dex: "Looks like we wait."
Johnny Gat: "Why? So we can let this jag-off jerk us around? Fuck that."
Dex: "And what would you rather do?"
Johnny Gat: "You know exactly what I'd like to do."
Dex: "Johnny, we're not blowing up City Hall."
Johnny Gat: "I'm just sayin, it would solve a lot of problems."
Dex: "What if they're keeping Julius there?"
Johnny Gat: "Alright, but there's gotta be a better plan than "let's be Monroe's bitches"."
Dex: "You're right, there is. Marshall Winslow was a major public figure, and you can bet your ass that people would ask questions if the chief of police wasn't at his funeral. I say we hit Monroe during the funeral procession. That should show whoever he's working with that we're not fucking around."
Johnny Gat: "You're sayin' we should assassinate the Chief of Police while he's at the funeral of the guy we just smashed."
Dex: "Yeah."
Johnny Gat: "Don't tease me Dex."
Dex: "Let's fuckin' do it."

Dex: "Alright, let's get goin'. Johnny's going to meet us there."
Dex: "We only get one chance at this, so we can't fuck this up. Once we hit Monroe we better get out of there quick, the last thing we want is to make big scene."

Johnny is set up across the street, he'll be giving us cover if things go bad after the hit. Now let's get to the roof before mourners roll by.

Take this. When the funeral procession comes into view, take out Monroe. He'll be the one in the cop car.

Okay, here comes the procession, just line up with the cop car and... aw shit, there's more than one. Alright this ain't a problem, it'll just take a little more work to find out what car he's in.

— Dex, upon seeing the cops

Fuck it, take all those cop cars our, Monroe's gotta be in one of 'em...

Fuck! Well, they know we're here, no sense in being subtle.

— Dex, after alerting the cops

That takes care of that asshole, let's get to forgive and forget 'fore the cops get us...

— Dex, after destroying all vehicles

They'll be scooping Monroe up for weeks.

— Dex, after using Forgive and Forget

Look, I'm gonna be honest with you dawg, once we hit the chief of police there's no turning back. Sure, the motherfuckas that got Julius are gonna get a wake up call, but you gotta believe the po-po are gonna be on our ass. I guess what I'm sayin' man is that if you wanna back out, no one is gonna blame you. Well, Johnny might, but he's an asshole anyway so I wouldn't stress it. Anyway, Johnny and I got this worked out so the hit should be smoother than Aisha's pussy. McManus'll be waiting for us at a building along the procession route. Take that bad boy and wait to take your shot. We'll never get a chance like this again so let's not fuck it up. 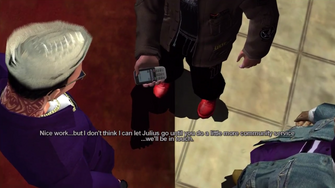 Johnny Gat, Playa, and Dex gather around to hear what Chief Monroe has to say 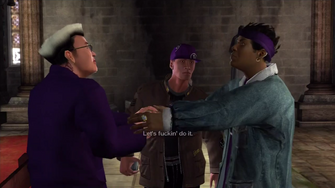 Johnny Gat and Dex agree on a plan of action, with Playa standing nearby 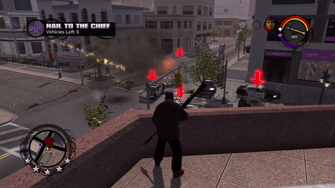 This article contains no references. See Help:Cite.
Retrieved from "https://saintsrow.fandom.com/wiki/Hail_to_the_Chief?oldid=421564"
Community content is available under CC-BY-SA unless otherwise noted.