The Health Bar is located in the upper right corner of the screen. If the Bar totally depletes, The Protagonist is "Smoked" and respawns at the nearest Hospital.

In Saints Row and Saints Row 2, Respect is used to play through Missions and Strongholds. Respect is earned by completing Activities and Diversions, and by killing rival Gang Members.

The Respect Bar is the purple bar located on the upper right corner of the screen. It shows the amount of Respect that has have earned. One full Respect Bar means is used to play one Mission or Stronghold. Once the Respect Bar is filled, a multiplier shows how many Missions are available with the current level of Respect.

The currently selected Weapon is shown beneath the Stamina Bar and above the Respect bar. Below the picture of the weapon are two numbers. The first is ammo remaining in the clip, the second is the total amount of ammo remaining.

When Inventory button is pressed, a weapon Radial menu and food selection d-pad appear on screen. This shows all weapons The Protagonist is currently carrying, as well as food items.

In Saints Row: The Third and Saints Row IV, the presence of enemy tanks is represented by a red square and enemy aircraft are marked with a helicopter or VTOL symbol.

Whenever a hostile is made towards a Police or a Rival Gang, the corresponding Notoriety Bar starts to fill up. Once the Bar is full, Notoriety rises to Level One, which is displayed on the HUD as a the appropriate gang symbol, and the Bar starts to fill up again. When notoriety increases, the police/gang sends more people or powerful vehicles.

After unlocking the ability to have Followers, circles appear in the top right corner of the screen, to the left of the Health/Weapon section.

Up to three circles are shown, allowing up to three Followers to be recruited. When Followers are recruited, their face is displayed within the circle, along with their current health, which is shown a red quarter-circle. When the homie falls in battle or other cases, a countdown shows their time to be revived.

Sometimes known as a Reticule [sic] , the Reticle is displayed in the middle of the screen when using a gun, to assist aiming, and the appearance changes depending on which gun is equipped.

Some weapons use a crosshair-style reticle, while others use a circle version.

The reticle is also shown while driving with a weapon equipped, or when the vehicle has a mounted weapon. When using a Blaze, the reticle also shows the current level of the Water Spray.

In Saints Row: The Third, some armed vehicles and weapons show their reticle, and like Saints Row 2 version, show the limit for firing before overheats. With a charged weapon, such as the Sonic Boom or the F-69 VTOL's Swarm Missiles, the reticle fills relative to the hold time, and the attack power is relative to charge level. 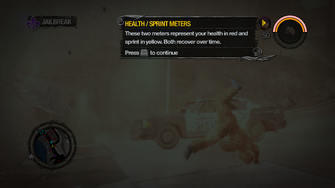 Retrieved from "https://saintsrow.fandom.com/wiki/HUD?oldid=407120"
Community content is available under CC-BY-SA unless otherwise noted.