"Green With Envy" is the sixth mission of the Vice Kings story arc in Saints Row.

Every day, that bitch gets driven to the construction site in a Status Quo, then sneaks off to get her freak on with Warren before she goes back home to Tony. While she's busy suckin' cock, you deal with the chauffeur and take his place. When she's done wiping her mouth, she'll have you drive her back. Once you're at Tony's, it's all up to you.

— Julius Little to Playa, while at the church with Dex and Aisha.

Playa meets Julius Little, Dex, and Aisha at the church. Julius asks Playa to pose as Tanya Winters' chauffeur to find out where Johnny Gat is being held, and then to kill Anthony Green and rescue him.[1]

After sleeping with Warren Williams at Kingdom Come Records, Playa picks her up in her limo and leads her back to Anthony's condo, avoiding some hostile 3rd Street Saints along the way. After knocking Tanya unconscious, Playa successfully storms Green's abode and kills him in a gunfight, rescuing the injured Gat in the process. Tanya, however, manages to escape.[2][3][4]

Julius came up with a plan to get Johnny back. By taking Tanya's limo driver's place, you were able to get her to tell you where Anthony Green's condo was located. After driving her around while maintaining your disguise, and then ditching some Saints from Troy's crew that didn't know about the plan, Tanya finally led you to where Johnny was being held. A fight broke out, but you killed Big Tony Green and rescued Johnny. However, during the fighting, Tanya got away.

The sixth Vice Kings mission involves driving to certain objectives within time limits, escaping hostile enemies without killing them so as to maintain disguise, and killing Anthony Green.

Go to the record studio and wait for Tanya.

Drive to Kingdom Come Records, the building destroyed during ...To Kingdom Come. The route is marked on the minimap.

After Tanya heads inside to see Warren, wait for her Status Quo to leave the vicinity.

It is not necessary to complete this objective, as there is no penalty for immediately killing the driver, and doing so skips straight to "Take the driver's place", unless Playa is already in the vehicle.

Kill its driver when prompted; either shoot him through the windscreen or pull him out of the vehicle to leave him defenseless. He is not difficult to kill and cannot fight back, but taking too long to kill him after firing the first shot may allow him to escape.

It is possible to complete the objective by having an NPC killing the driver.

It is possible to skip this objective by killing the driver before completing the last objective.

Get into the Status Quo.

It is possible to skip this objective by killing the driver while driving the limo.

Return to the record studio and pick up Tanya.

Take Tanya to the clothing store.

HUD: Timer counting down from 1:20

Well, I got some time to kill before Tony expects me back. Might as well do a little shopping.

— Tanya Winters, getting back in the car after seeing Warren

Tanya requests Playa to drive her to Impressions in Nob Hill. The route is marked on the map.

HUD: Timer counting down from 1:20

Stop by Friendly Fire, I'd like to pick something up for Tony.

— Tanya, getting back in the car after Impressions

Tanya requests Playa to drive her to and Friendly Fire in Brighton. The route is marked on the map.

Lose Troy's crew without killing them.

While she is inside Friendly Fire, Julius Little calls to notify Playa on approaching 3rd Street Saints who are unaware of the plan and are aiming to kill Tanya.

Escape these gang members without killing them. They arrive in three separate vehicles, and there are limited options to escape them. Using a Forgive and Forget does not work. Once the limo is a certain distance from the 3rd Street Saints, they disappear. Usually, there is one vehicle that is more persistent than the other two.

Tip: Drive on the wrong side of the road to get them to crash.

Take Tanya back to Anthony's condo.

Once they're all gone, Tanya asks Playa to drop her off at 707 Springfield.

Inside is a minor skirmish with a few Vice Kings, including Anthony Green himself. Green is equipped with an AS12 Riot shotgun and has more health than most enemies, but despite his reputation, he'll nevertheless quickly fall to a hosing of bullets.

The mission ends upon killing Green. The Saints take over the Atlantis Avenue neighborhood on completion of this mission. This was also the sixth Vice Kings mission, marking just over one half of the Vice Kings story arc completed.

The mission can be failed by getting smoked or busted, failing to kill Tanya's driver,[5] abandoning/killing Tanya,[6][7][8] destroying the limo,[9] killing a 3rd Street Saints gang member,[10] being detected by Tanya,[11] or failing to reach the stores in time.[12]

Aisha: "You think it'll work?"
Julius Little: "It has to. Sit down, son."
Playa sits down
Julius Little: "We got a way to rescue Johnny."
Dex: "The shit Johnny said about Warren and Tanya really got to Tony. Now, the only time she's allowed out of his sight is when she's checking on the rebuilding of the recording studio."
Julius Little: "Every day, that bitch gets driven to the construction site in a limo, then sneaks off to get her freak on with Warren before she goes back home to Tony. While she's busy suckin' cock, you deal with the chauffeur and take his place. When she's done wiping her mouth, she'll have you drive her back. Once you're at Tony's, its all up to you."
Aisha: "Please bring Johnny back. Just don't tell him I was worried."

Well, I got some time to kill before Tony expects me back. Might as well do a little shopping.

— Tanya Winters, getting back in the car after seeing Warren

This should only take a minute.

Stop by Friendly Fire, I'd like to pick something up for Tony.

— Tanya, getting back in the car after Impressions

I wonder if they gift wrap...

Hey playa, we got a problem. Some of Troy's crew didn't hear the plan, and decided they were going to hit Tanya when she was in her limo. These are our boys. I don't want them gettin' hurt.

— Julius Little, calling to warn Playa while Tanya is inside Friendly Fire

Take me back to 707 Springfield.

— Tanya, getting back into the car after Friendly Fire

— While being chased by the Saints

— After losing the Saints

— When driving the wrong way

— When driving too slowly

— Tanya Winters, being knocked unconscious by Playa in the "Ladies First" cutscene

— Gat, during the battle with Green

Haha, it's gonna take more than that to drop this n​igga!

— Green, after being damaged

Johnny Gat: "Hey, not to be pushy or nothin', but how 'bout you get me out of this fucking chair?!"
Johnny Gat: "'Bout fuckin' time you got here."
Johnny Gat: "Where's Green?"
Johnny Gat: "That's much better. I heard Green say that he's got some heavy shit in the back. I'll have some of our boys roll on over and bring the hardware back to the crib." 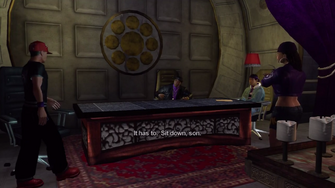 Playa meets Julius Little, Dex, and Aisha at the church 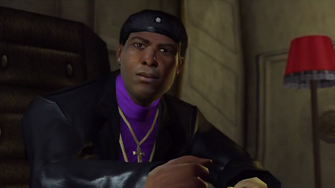 Julius Little tells Playa what they need to do 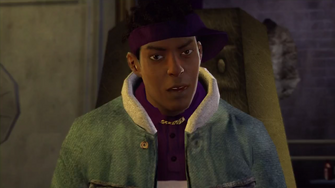 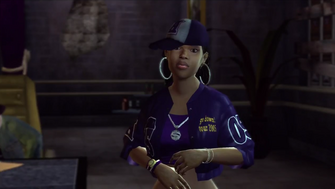 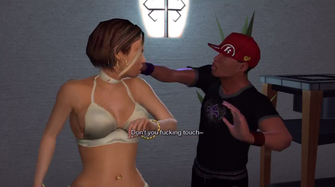 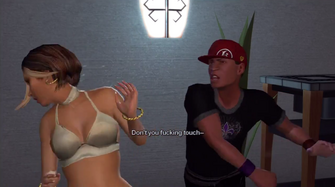 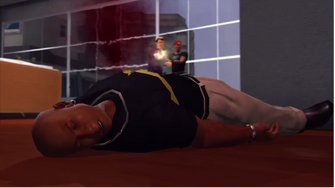 In a rage, Johnny Gat fires at Anthony Green's corpse 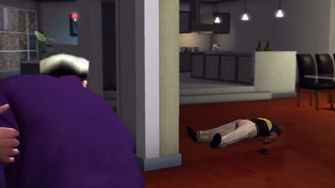 ...and, once out of ammo, throws the gun at him too 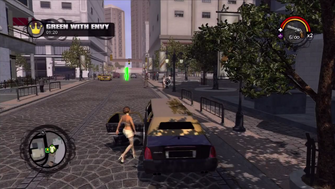 Green With Envy - Tanya getting into limo 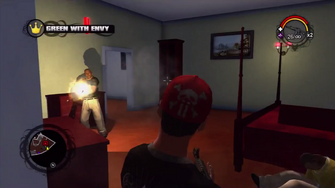 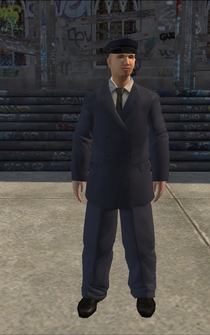 This article contains no references. See Help:Cite.
Retrieved from "https://saintsrow.fandom.com/wiki/Green_With_Envy?oldid=422890"
Community content is available under CC-BY-SA unless otherwise noted.