The Grave Digger is a weapon in Saints Row: The Third.

The Grave Digger is a lever-action shotgun favored by gangs in Steelport. It can also be bought at Friendly Fire. Whilst it has a much wider scatter than the AS3 Ultimax and S3X Hammer, it does more damage than either of its counterparts with no upgrades - and is by far the most powerful of the three shotguns, per-blast once fully-upgraded.

By default, the Grave Digger seems something of a wash; it does only slightly more damage than the AS3 and S3X, but has a slower rate of fire, with a much wider scatter and thus shorter effective range. Upgrades substantially ramp up the weapon's firepower, adding two barrels and giving it incendiary ammunition, giving it tremendous punch against targets at close-range and makes it more effective at long range. Because of its raw stopping power and slower fire rate, it tends to be a little more thrifty with ammunition than the other two.

The Grave Digger is at its best when fighting indoors or at close range. While not as versatile as the other two shotguns, its raw stopping power is beyond reproach, capable of devastating even a Brute in a few blasts aimed at head-level.

When using Fine Aim and standing still, this weapon fires much faster. 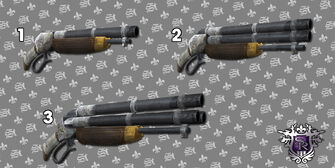 Upgrades of the Grave Digger 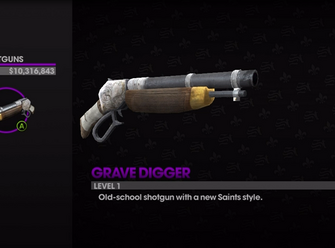 The Grave Digger in the Weapons Cache 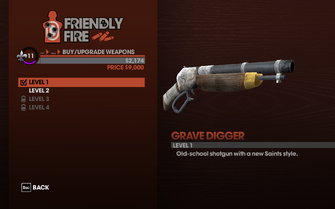 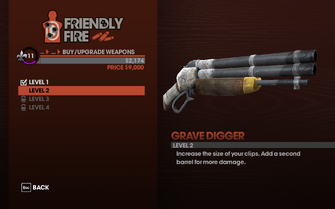 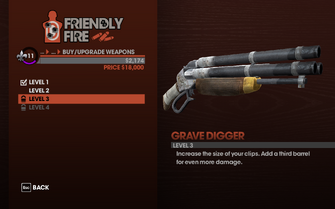 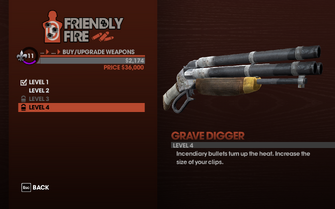 This article contains no references. See Help:Cite.
Retrieved from "https://saintsrow.fandom.com/wiki/Grave_Digger?oldid=424553"
Community content is available under CC-BY-SA unless otherwise noted.