"Fox Drive Weapons Plant" is a Stronghold in Saints Row.

Now that the Carnales' drug ring is hurtin' they've started to move to gun running. They set up a weapons plant in an old steel factory. Don't let their business get off the ground.

In an effort to expand their income, the Carnales converted a Fox Drive steel mill into a weapons plant. By placing bombs in strategic locations, you were able to put a stop to the Carnales arms ring before it even had a chance to take off.

For just the first Carnales Stronghold, this is a challenging Stronghold. The first objective is fighting 14 well-equipped Carnales gang members outside the plant, including two that are wielding McManus sniper rifles.

Get inside the weapons factory.
Plant the bombs at these locations.
One more bomb left to plant.

Once inside the plant, the Stronghold becomes much easier, with a few more gang members and planting three bombs at marked positions.

Find a way to the top of the factory.

The fourth and final bomb location is outside, right on top of the plant. Exit the plant near the third bomb-plant location and work their way up along some sloped roofs. Be careful, as falling means being instantly smoked.

Get away from the factory before it blows!

Once the final bomb is planted, there is 35 seconds to flee the explosive radius before the bomb detonates and destroys the building. The best method of escaping is by quickly turning around, sprinting down the slopes again, exiting onto some scaffolding, and jumping down onto the railway tracks. Then, simply sprint west, away from the area. 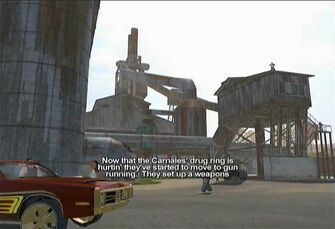 The Weapons Plant where the Stronghold takes place

The Weapons Plant where the Stronghold takes place 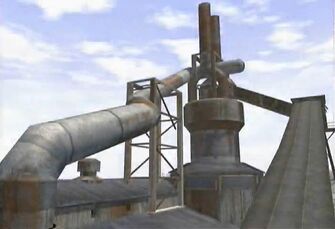 The Weapons Plant just before the bombs detonate and it explodes

This article contains no references. See Help:Cite.
Retrieved from "https://saintsrow.fandom.com/wiki/Fox_Drive_Weapons_Plant?oldid=413258"
Community content is available under CC-BY-SA unless otherwise noted.