Fire Truck is a Job Diversion in Saints Row 2.

When entering a Blaze fire truck, the player is prompted to start the Fire Truck Diversion. After starting this Diversion, a Fire Extinguisher is equipped which is used to extinguish fires inside burning buildings.

Each level of the Diversion consists of a single building, with multiple fires inside. The building which is on fire is marked on the Map, and is an existing enterable building, often a store.

Once inside the building, individual fires are marked on the Map and the player is required to extinguish every marked fire in order to complete each level. It is possible to put out several fires at once, if they are close together, or in a straight line where you are spraying. If a fire spreads within the building, the number of fires which must be put out increases, but it is not required to put out civilians who are on fire.

After each level, the player must return to the fire truck, and move on to the next fire. It is not possible to switch to a different Blaze mid-Diversion. There is a time limit, which continues counting down when the player is outside of the Blaze, so it is important to park as close to the building as possible. The remaining time is carried over to the next level.

Each time the fire truck is entered, the Fire Extinguisher is refilled. Usually, the capacity of the Extinguisher is sufficient to put out all fires in a single building, but sometimes, especially on higher levels, the player may run out of water before putting out every fire, and must refill it at the Blaze, or with a fire hydrant.

On rare occasions, the fire may already be put out and the player is then directed to another burning building. 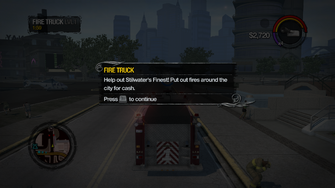 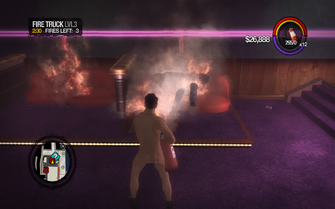 Gameplay from the Diversion 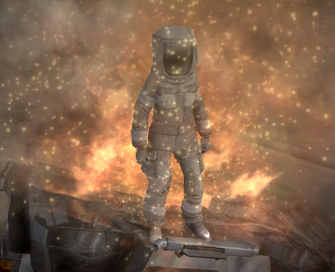 This article contains no references. See Help:Cite.
Retrieved from "https://saintsrow.fandom.com/wiki/Fire_Truck?oldid=410913"
Community content is available under CC-BY-SA unless otherwise noted.