"Filmore Parking Garage" is a Stronghold in Saints Row.

A bunch of King's bookies are meeting at a parking garage to discuss rigging games. Don't let any of 'em walk away from the meeting. No one fucks with my hockey game...

Julius Little phones The Protagonist and briefs them on some Vice Kings bookies meeting to discuss rigging games. The Protagonist is to interrupt the meeting and kill them all.

After losing money in a rigged hockey game, Julius asked you to go to the Filmore parking garage to break up a group of Vice King's bookies who were meeting there. Upon arriving at the garage, sent the Vice Kings a message by destroying all of the bookies cars.

Go up the garage, fighting lightly-defended Vice Kings and destroying their cars. Save on SMG ammo for the final part of this Stronghold and use a shotgun to destroy the vehicles instead. Once they start flaming, they are sure to eventually explode.

One more Vice King left, on the rooftop.

Once all-but-one vehicle is destroyed and The Protagonist reaches the rooftop, the final Vice Kings gang member escapes in the final vehicle and drives off the rooftop, triggering a car chase.

Don't let him get away.

He is fairly easy to deal with; simply follow him off the garage and chase after him, showering him with submachine gun ammo. His vehicle does not last long at the mercy of the poor driver. 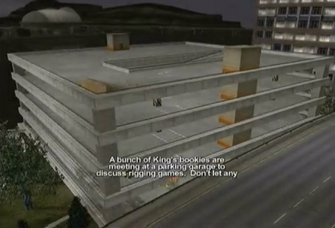 The garage where the Stronghold takes place 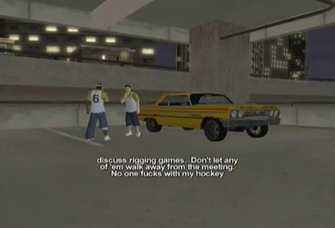 The garage where the Stronghold takes place

This article contains no references. See Help:Cite.
Retrieved from "https://saintsrow.fandom.com/wiki/Filmore_Parking_Garage?oldid=413254"
Community content is available under CC-BY-SA unless otherwise noted.