"Faster, More Intense!" is the first mission in the Saints Row: The Third DLC, Gangstas in Space.

In this mission Playa participates in the Gangstas in Space film directed by Andy Zhen. The objective is to free alien princess Kwilanna played by Jenny Jaros from the military and then escape from the pursuers.

Go to the Film Studio located in Loren Square around the corner from the tunnel.

Get into the Torch that is parked just outside the studio.

Head up to the helipad where Kwilanna is tied up.

Playa is now standing in a helicopter waiting to jump out.

Jump out of the helicopter.

Land on the Target marked with blue smoke.

The breach scene again but this time there are more explosions, more guardsmen, and now a helicopter between Playa and Kwilanna.

Untie Kwilanna. She gets up and gets in the driver's side of the Eagle parked right next to her.

Eagle takes off upon entering.

A Bulldog drives up to Playa and Kwilanna with 3 guardsmen getting out.

Kwilanna gets in the driver side of the Bulldog while Playa operates the turret.

In Co-op, the Host uses the turret while the Guest sits in the passenger seat next to Kwilanna.

Kwilanna navigates through Loren Square and Henry Steel Mills while being pursued by other Bulldogs.

When reaching the bridge there is a road block that consists of 4 Bulldogs, 2 Challengers, and 2 Tornados which are destroyed by 2 Aegeans that uncloak from behind them.

Starting at the bridge Kwilanna navigates the Bulldog through Ashwood, Burns Hill, Salander, and Brickston. While being bombarded by Energy Blasts and Lasers from the pursuing Aegeans.

Kwilanna drives the Bulldog down the road then shortly off a cliff, Playa and Kwilanna are floating in the water.

The take restarts and Playa intervenes and tells Jenny to take a different route.

Being pursued again by more Aegeans, Kwilanna navigates through Brickston, Ashwood, Salander. Kwilanna navigates to tunnel in Burns Hill, the pursuing Aegeans crash. After the crash, a few Scythes arrive and continue pursuit almost to the end of the tunnel.

Hey, I'm so happy we can finally talk! My name's Andy Zhen, I'm sure you've heard of me. The studio signed me on to direct Gangstas in Space and I want YOU to be the star! I mean, sure you're already a star, but think of immortalizing yourself on the silver screen. Beautiful thought, right? Swing by the studio and you can see the script. I'm sure you'll love it!

Land in the target, it's a perfect spot!

They don't have enough space to move! 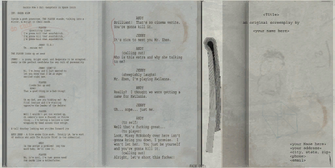 The script used in this mission 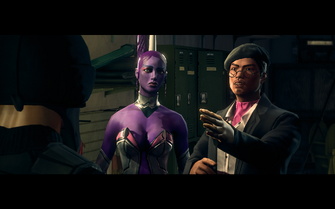 Andy Zhen speaking with Playa with Jenny beside him 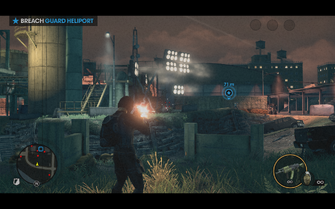 Playa fighting their way into the compound 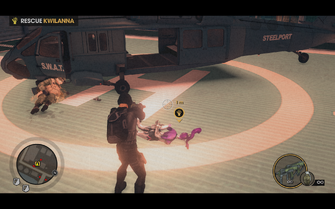 Playa about to release Kwilanna/Jenny 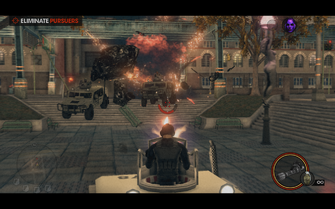 Playa fighting off the attackers 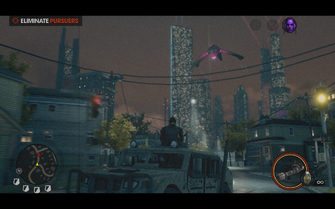 Playa fighting off against Aegean Spaceships

This article contains no references. See Help:Cite.
Retrieved from "https://saintsrow.fandom.com/wiki/Faster,_More_Intense!?oldid=425910"
Community content is available under CC-BY-SA unless otherwise noted.