Eric Gryphon is a character in Corporate Warfare and Saints Row: The Third.[1]

Dex has been moving waste from the nuke plant that he can sell on the black market, and now he's planning on using the Masako to destroy the evidence. If Ultor finds out what he's doing Dex is finished

Eric Gryphon is a short, caucasian man with black hair and a receding hairline. He is slightly overweight and wears a black suit with white stripes, and a thin white scarf resting around his shoulders.

Unlike his predecessor Dane Vogel, Eric becomes somewhat of an ally during the events of Corporate Warfare, as he and Playa unite against their common enemy: Dex.

Prior to the events of Saints Row 2, Eric Gryphon was an Ultor Executive who oversaw many of Ultor's special projects, such as the development and testing of the EDF Scout prototype.[2]

While he doesn't physically appear in the game, Gryphon's name is mentioned during the epilogue. When Johnny Gat and Playa infiltrate the Ultor Pyramid, an intercom announcement says "A reminder, Eric Gryphon will be inspecting the premises next week".[3]

At the end of the game, due to the death of Dane Vogel, Gryphon is appointed as the new Director of Special Projects.[4][5]

At some point, Dex, now the head of Ultor Security, tries to kill Gryphon in order to gain more power within the company. Desperate, Gryphon turns to Playa for help.[6] Eager to get revenge on Dex for setting them up earlier,[7] Playa agrees to Gryphon's request after receiving a tip from Pierce.[6] Working together, Dex's plot to have the Masako assassinate Gryphon is foiled.[6]

After this, Gryphon visits Playa at the Saints Hideout, and presents them with a plan for taking the fight back to Dex.[8] He explains that Dex has been plotting to make some extra money on the side by stealing radioactive waste from Stilwater Nuclear. Once enough waste has been collected, Dex plans to sell it off on the Black Market and then use the Masako to destroy the evidence.[8]

In spite of the fact that Gryphon offers to provide some help in the form of Ultor security agents, Playa initially expresses some reluctance in agreeing to the plan; owing to the fact that they'd still be doing most of the fighting against the Masako by themselves.[8] Gryphon finally manages to convince them after explaining that Dex's reputation and standing within Ultor would be utterly ruined if his superiors find out about what he's doing.[8]

With the support of Playa, Gryphon and Ultor succeed in derailing Dex's plans.[8] With the realization that Playa is gunning for him, Dex decides that it is no longer safe for him to remain in Stilwater. He quickly has Katie, his secretary, arrange for an immediate transfer to another Ultor branch and then leaves the city.[8]

The next day,[9] Gryphon visits Playa again and informs them on Dex's abrupt departure/escape from Stilwater. Furious, Playa insists that Gryphon do something to "make it right"; namely helping them to kill off Dex's associates.[9]

Gryphon points them in the direction of an Ultor-sponsored event being held at the Stilwater Boardwalk. One in which many of Dex's "so-called" people would be in attendance.[9] After that, he assists Playa in killing all of Dex's associates by looking out from the lighthouse near the boardwalk, carefully watching for anyone he sees popping into the open, and then relaying that information to Playa via wake-talkie.[9]

After it is over, Gryphon and Playa meet up for one last time and agree to make peace between Ultor and the 3rd Street Saints. Gryphon promises to get Ultor to leave the Saints alone, under the condition that the Saints never trouble Ultor again.[9] This agreement formally ends the hostilities between the two groups.

Eric Gryphon has finally secured his position as Ultor's Director of Special Projects, and is affiliated with the 3rd Street Saints, who have turned into celebrities after becoming business partners with Ultor. He isn't seen during the game, but Gryphon's role is confined to a small excerpt of an interview that he did for a program called One on One, which may play on the radio. He is also mentioned by the Male Voice 2 when told by Shaundi that Ultor's PR department can't cover the destruction of the Hughes Memorial Bridge, telling her that he will call Eric later.[10]

Announcer: "This Tuesday, One on One brings you an exclusive in-depth interview with the Ultor's Director of Special Projects, Eric Gryphon."
Interviewer: "Eric, with all that's gone down in the past few years in Stilwater, what are your hopes for the future?"
Eric Gryphon: "The Ultor Corporation spent billions making Stilwater the beautiful city it is today. This was a city riddled with gang warfare and we turned it into a place future generations would be proud to call home. It's my hope to continue that mission."
Interviewer: "But in the midst of all this change, your predecessor was murdered. Is it possible that Ultor is doing more harm than good?"
Eric Gryphon: "Listen, Rome wasn't built in a day. Dane Vogel was a great man, and his presence will be sorely missed, but we have to look towards the future. I think Dane Vogel would be proud to see what Ultor has accomplished since his untimely defenestration."
Interviewer: "How do you respond to claims that Ultor is supporting the gang that tore the city apart?"
Eric Gryphon: "This country was founded on the ideas of second chances - who am I to deny a group of mass-murderers theirs?"
Announcer: "The interview you can't afford to miss. One on One welcomes Eric Gryphon into the studio, Tuesday at nine, only on Channel 6."

— Eric Gryphon One on One radio commercial 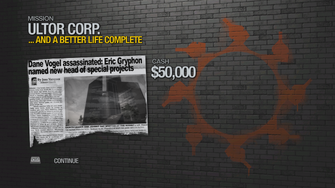 Eric Gryphon is first mentioned in Saints Row 2, upon completion of the mission "... and a Better Life" 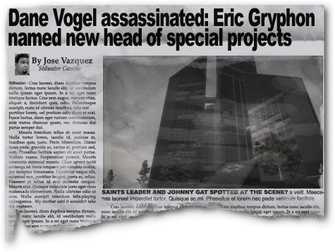 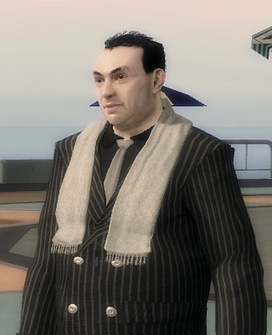 Eric Gryphon from the torso up in Saints Row 2: Corporate Warfare 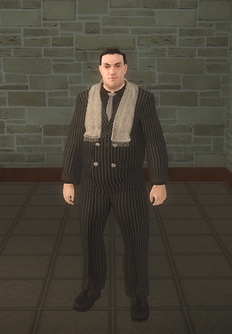 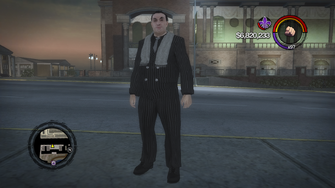 Eric as a Homie

• Who voices Eric Gryphon?
Retrieved from "https://saintsrow.fandom.com/wiki/Eric_Gryphon?oldid=425005"
Community content is available under CC-BY-SA unless otherwise noted.