Dex is a member of the 3rd Street Saints created by Julius Little to try and rid the city of Stilwater gang violence at the hands of Los Carnales, Vice Kings and Westside Rollerz. During the events of Saints Row, Dex is appointed by Julius to take down Los Carnales and to also watch over Johnny Gat who offered to do the Vice Kings.[13]

Dex appears to be the voice of reason amongst the other lieutenants and is a superb tactician and would rather plan than just going in guns blazing, which he tries to talk a trigger happy Johnny Gat out of doing.[14] In the final mission for the Carnales, Dex and Playa take down Angelo Lopez, finally finishing the Carnales gang.[5] He appears in the second epilogue mission when taking down corrupt police Chief Monroe who is holding Julius.[15]

During Saints Row 2, Dex now works as the Head of Security for Ultor and is a successful millionaire,[16] leaving behind his life as a gang member. He doesn't appear in person during the game, but is mentioned a couple of times,[17][16] and the player is required to phone him to unlock the mission Revelation, which leads to Dex betraying both Playa and Julius after luring them there.[18] In the second DLC for the game Corporate Warfare, Dex attempts to have newly appointed CEO of Ultor Eric Gryphon killed,[10] while partaking in illegal nuclear waste smuggling.[19] In the end, he ends up having to flee Stilwater to an unknown location after Playa ruins his plans.[20]

Dex doesn't appear in Saints Row: The Third. In the unreleased spin-off Saints Row: Money Shot, he is assassinated by a female assassin working for Ultor named Cypher.

Dex is featured in the Revenge Diversion in Saints Row: Gat out of Hell[3][4] as a husk wearing Dex's visor cap from Saints Row.

Dex was one of the people affected by gang violence spreading throughout Stilwater and thus joined the gang formed by Julius Little, the 3rd Street Saints, to rid the city of its chaotic state. Dex appeared to be the voice of reason amongst Little's lieutenants. Dex is a superb tactician, but talk amongst the generic Saints gang members that wander the streets indicate that few Saints believe that Dex deserved his post and there was concern that Dex might have eventually challenged Julius Little for control of the gang.

Before Playa was blown up on Alderman Richard Hughes' boat, Dex dropped his flags after he was offered a job in Ultor by Dane Vogel at the Saints' church. He called Troy Bradshaw after this happened to say that he knew Troy was a cop and that he was out of the Saints, and wanted to make sure he and Troy wouldn't have a problem, due to Troy being able to arrest him.[21]

Playa visits the police station and listens to the conversations that were taped. He finds out that it was Julius who put the bomb on Alderman's boat. He also finds Dex's file containing his phone number. Playa calls Dex and he tells Playa to come meet him at the church so that they can get rid of Julius.[21] However, this ends up being a trap set up by Dex and instead of Dex, Julius shows up. After a conflict between Julius and Playa, a smoke bomb is thrown through the church's window.[18] Masako agents sent by Dex attack the two, who ally briefly to escape.[21]

Julius was right... You never know when to quit.

Some time after, Eric Gryphon, Ultor's new CEO, visited the Saints, telling them that he wanted protection from the Masako who were sent by Dex to kill Gryphon. Playa successfully protected Gryphon from Dex's assassination attempt. After this Gryphon and Dex met in front of the Phillips Building and talked about Dex's attempt.[10]

Then Gryphon informs Playa that Dex is selling toxic waste to illegal buyers. Playa, with help from Ultor security, succeeds in stopping Dex's plan. Dex felt the heat closing in on him and asked for an immediate transfer to another Ultor branch.[19]

Gryphon again informs Playa that Dex has fled and that he couldn't do anything. However, Playa still wants to hurt Dex, so Gryphon comes up with a plan. While Gryphon is standing on the lighthouse identifying Dex's acquaintances walking around, Playa kills them. After this, Playa says he will find out which city Dex fled to and get him.[22]

Dex's days of hiding have finally come to an end. After deducing his present location, Ultor dispatches a professional female assassin named Cypher to take him out. Using some very sophisticated sniper technology, Cypher makes her move on Dex in the midst of his big corporate birthday party, swiftly disposing of him with a bullet to the head.

Main Articles: Saints Row: Gat out of Hell and Revenge

I was happy with people forgetting I exist, but motherfuckers always gotta bring up the past...

— One of Dex's lines upon confrontation.

Dex is already dead, and can be killed by Johnny Gat or Kinzie Kensington during their attack on Hell.[4]

The first few times he spawns, Dex is unarmed and alone. After that, he has a firearm and demon allies, starting with Imps and getting stronger demons with each kill. After being killed 6 times, he spawns with 2 Legionnaires. After being killed the 7th time, this resets and Dex goes back to spawning alone and unarmed, and he continues to spawn indefinitely, with the upgrade cycle repeating.

He only receives additional firepower and allies when he is killed. If his demon followers are killed but he is left alive, he does not upgrade his followers.[details?]

Killing Dex's Legionnaires is an easy way to get the "Kill Legionnaires" challenge, but he may spawn with his extra demons at an inconvenient time. At max Notoriety when an Archduke spawns, Dex is removed along with all the other demons.

In the Shawarma cutscene after completing City Takeover, Dex is in the fetal position, still being tormented.[25] 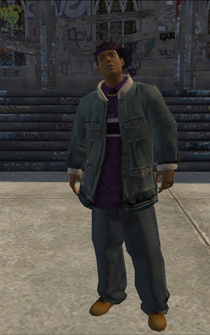 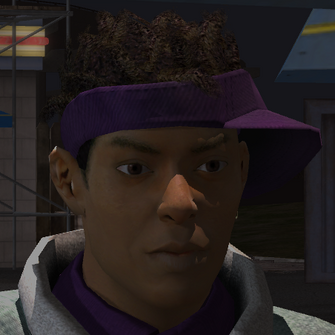 Dex's face as a homie in Saints Row 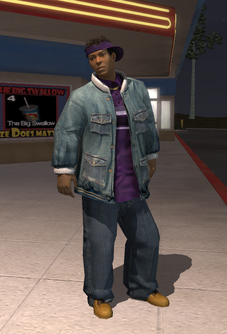 Dex as a homie in Saints Row 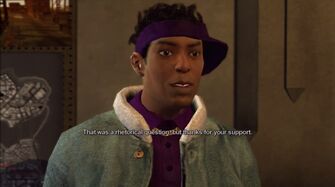 Dex during the mission Crack Down 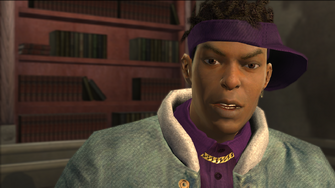 Dex in the Calm Before the Storm cutscene 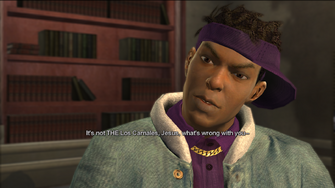 Calm Before the Storm cutscene - It's not THE Los Carnales 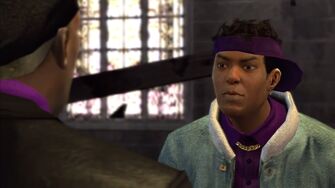 Dex arguing with Julius in Strength in Numbers 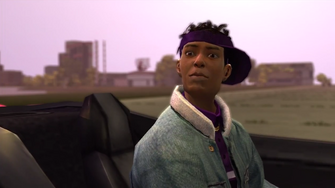 Dex during the mission What Goes Up... 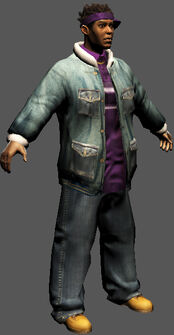 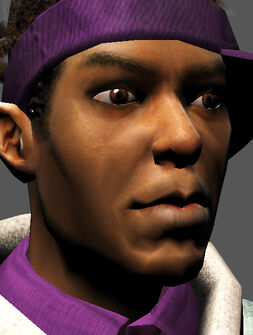 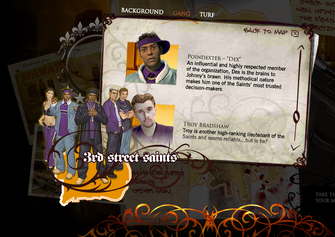 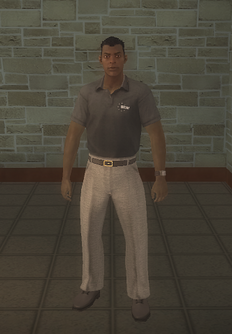 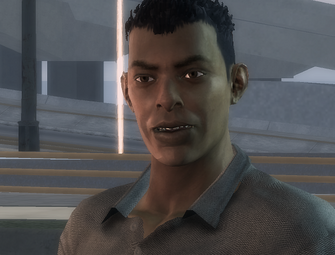 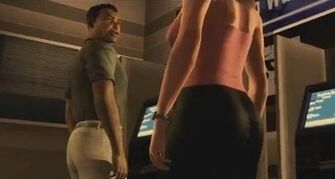 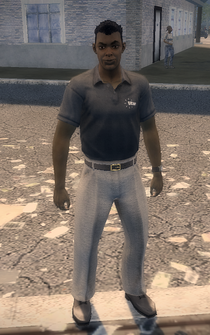 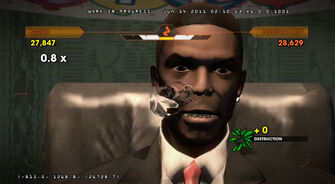 Dex about to be shot dead in Saints Row: Money Shot 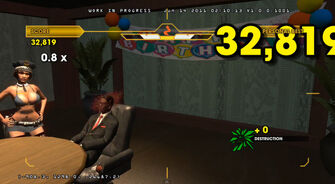 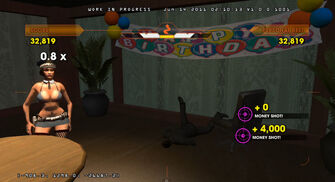 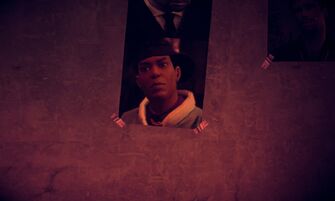 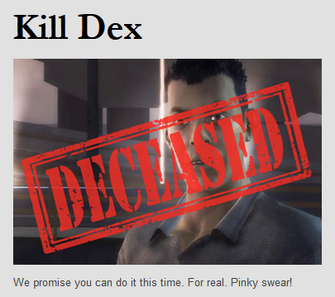 Dex's icon on radar in Gat out of Hell 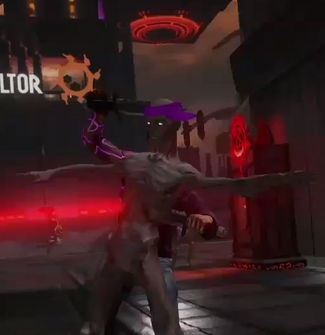 Dex in Gat out of Hell

• Calling Dex before unlocking the number.

• List of Missions and Cutscenes to check
Retrieved from "https://saintsrow.fandom.com/wiki/Dex?oldid=426987"
Community content is available under CC-BY-SA unless otherwise noted.