The Detonator is a weapon in Saints Row 2.

The Protagonist uses a Detonator to blow up The Brotherhood trucks Donnie rigs up.[1] It can be kept outside of the mission, but does not do anything when used.

The Detonator can be kept either on the first playthrough or by using a Mission Replay Exit Glitch.

During a replay, it is not possible to switch back to the Detonator after switching weapons, but it will be present in the Weapons Cache after glitching out of the mission.

Although Donnie does not have a revival timer during the mission, the Menu method can still be used, although the Replay in a Replay method is easier. 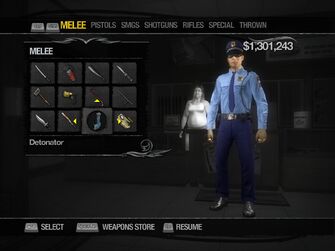 The Detonator in the Weapons Cache

This article contains no references. See Help:Cite.
Retrieved from "https://saintsrow.fandom.com/wiki/Detonator?oldid=311250"
Community content is available under CC-BY-SA unless otherwise noted.