Compete in an eight car demolition derby and destroy your opponents' cars to earn cash and respect.

Unlike other activities, this activity does not take place in the city, but within an enclosed Arena.

Each round begins with an announcer counting down from 3, after this the derby starts. There is no time limit, but if all other cars are destroyed before meeting the quota of that round, the round automatically fails.

The demo derby vehicle is always equipped with nitrous, which causes greater damage. After nitrous is used, it takes time for it to recharge.

There is only one location for Demolition Derby, which is the Ultor Dome in the Arena District.

In Saints Row, the car is selected at random between Rampage and Ruckus. There is a set number of cars which must be destroyed per round, and the round ends immediately after destroying the required number of cars, even if other cars are still driving.

If damage is done to another car, but another vehicle delivers the killing blow, no points are earned.

The number of cars destroyed is displayed on the HUD, along with the number of opponents remaining.

Larry: "Are you crazy man? The derby is about to start, if you're just standing around out here you could get really hurt..."
Larry: "Woo!"
Larry's car is knocked out of the way, by his brother Garry.
Garry: "Don't mind my brother, he's just bein' a pussy. Hop in a car man...there ain't nothin' better than smashing cars for money."

— Larry and Garry[4] in the Crash Course cutscene. 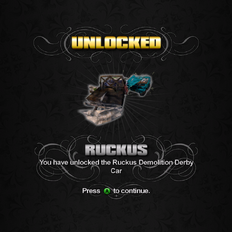 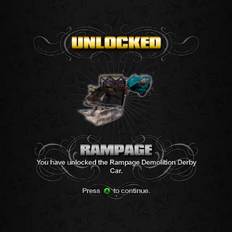 Both derby cars are customizable at the Car Mechanic. Visiting the mechanic automatically replaces the unique worn defense to new metal parts, the color of these parts are changed via the Trims menu, but cannot ever be changed back to the beater look.

There is only one location for Demolition Derby, which is Culex Stadium at Stilwater University, in the University District.

In Saints Row 2, there are 4 cars to choose from: Ruckus, Frenzy, Rumble, and Rampage. Between each round, upgrades are available for each car to increase speed, defense and attacks.

There is a set amount of money which must be earned per level, by the amount of damage done to vehicles. The round ends after passing that specified amount of cash, even if other cars still driving.

There is an Easy Demolition Derby Easter Egg in Saints Row 2.

After completing the normal Derby, a Special Derby marker is unlocked near the Demolition Derby location.[6] There is a choice of Derby type, as well as a choice of cars of each type.

There is no Unlockable Reward for completing the Bonus Derby. Completing each Special Derby level gives $1000 and no Respect.

The unlockables vehicles are defined as:

All unlockable derby cars are customizable at the Car Mechanic. Visiting the mechanic automatically replaces the unique worn defense to new metal parts, the color of these parts are changed via the Trims menu, but cannot ever be changed back to the beater look.