"Defeat Satan" is a mission in Saints Row: Gat out of Hell.[2]

After infiltrating Satan's castle with Jezebel's aid in the previous cutscene, Johnny Gat was offered a deal by Satan; should he be the one to marry Jezebel, Playa would be allowed to leave Hell alongside Kinzie Kensington. In the present, Johnny, however, crashes the wedding and, after releasing the safety on his gun, shoots Satan in the face. Johnny declares he killed Satan thanks to the Occam's razor principle; however, Satan throws him against a group of guards, pushes Jezebel away from the room and seals said room, then flees with Playa's soul to his throne. As Johnny is surrounded by guards, however, Kinzie appears. The two take out the guards and focus on Satan.

After Johnny defeats Satan, the latter surrenders. Satan then banishes Johnny, Kinzie, Jezebel and Playa back to The Ship, where Matt Miller and Shaundi are playing Trivial. Playa, Kinzie and Jezebel then suddenly appear through a portal. After a quick check-up and introduction to Jezebel, Kinzie points out that Johnny is missing. At the same time, it is seen that Johnny was intercepted by God. God states that Johnny saved Heaven and, therefore, can ask a single favor from God; meet with Aisha, who went to Heaven after dying; be crowned as King of Hell, albeit having to leave the 3rd Street Saints to do so; find the Saints a new homeworld for humanity; have God recreate Earth, at the cost of retconning the entire Saints Row world; or get the answers to every question in the universe.

Reunite Johnny with the love of his life.

Johnny enters the gates of Heaven, where Aisha awaits. The two walk to each other and kiss.

Johnny is looking at Hell inside of the Ultor building's tallest floor. Dane arrives and asks Johnny if he misses his friends. Johnny says he doesn't, as he believes they'll be there soon.

Find the Saints a new home world for what's left of humanity.

Johnny returns to The Ship, where Kinzie has found a perfect planet to serve as a homeworld. However, it is inhabited by a psychotic warlike race, making this their toughest fight ever. Johnny smiles and thanks God.

Have God recreate the Earth and retcon the entire world of Saints Row.

A mysterious man is seen walking through a hallway. The camera switches to a nearby room, where Kinzie and Matt, now with different outfits, speak of how they captured someone named Brimstone. Kinzie adds that, once the lieutenant arrives, they'll get Brimstone speaking. The lieutenant is revealed to be the mysterious man; Johnny, with a police badge wrapped around his neck.

Have God bestow Johnny with answers to all the questions of the universe.

Johnny is given the answers to every question in the universe. He replies with an "Ooooh" of satisfaction.


— "Reunite Johnny with the love of his life" ending

Jane Austen (narrating): "In Hell's weakened state, the Heavenly Host made short work of Satan and those who were loyal to him. Soon, Johnny was the new ruler of Hell."
Dane Vogel: "Kinda pretty isn't it."
Johnny Gat: "Yeah... it kind of is."
Dane Vogel: "Do you miss your friends?"
Johnny Gat: "Nah, I know they'll be down here in no time."
Jane Austen (narrating): "The End."


— "Find the Saints a new home world for what's left of humanity." ending


— "Have God recreate the Earth and retcon the entire world of Saints Row." ending


— "Have God bestow Johnny with answers to all the questions of the universe." ending 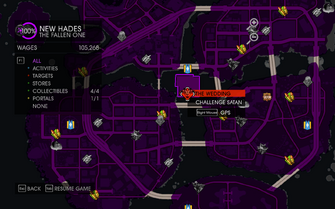 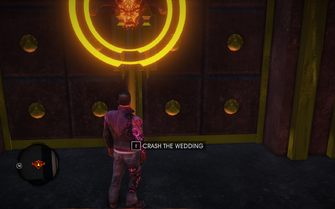 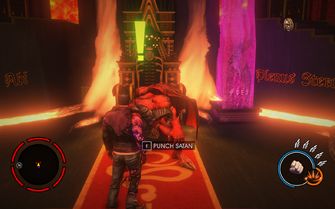 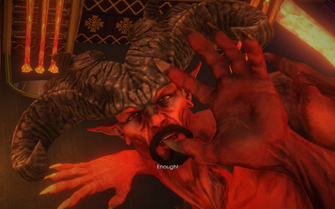 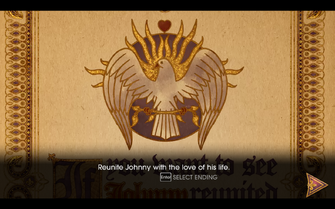 Ending - Reunite Johnny with the love of his life 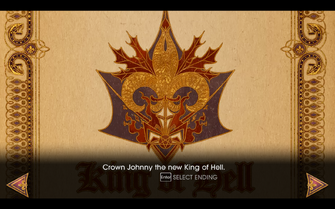 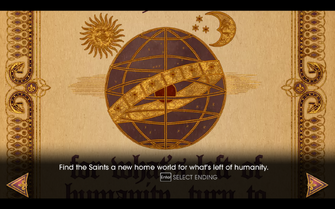 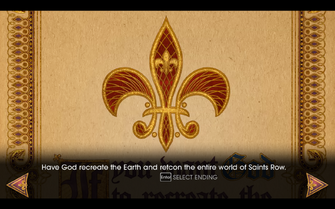 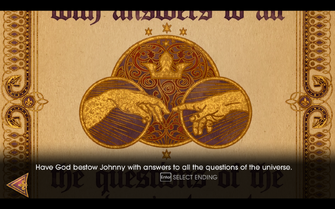 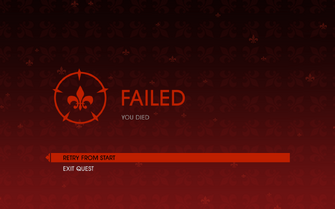 This article contains no references. See Help:Cite.
Retrieved from "https://saintsrow.fandom.com/wiki/Defeat_Satan?oldid=424017"
Community content is available under CC-BY-SA unless otherwise noted.