The D4TH Blossom is a weapon in Saints Row: The Third.[1]

The D4TH Blossom is a Sub-machine Gun featured in Saints Row: The Third. It is the favored SMG of the Deckers Specialist, and can be salvaged from them. Whereas the TEK Z-10 is a more ubiquitous weapon overall, the D4TH Blossom is intended for suppressive fire, boasting the highest fire-rate of any Sub-machine Gun. Like all SMGs, it can be dual-wielded.

Whilst it does extremely little damage by default, its high fire-rate makes up for this shortcoming, making it capable of quickly taking down targets through volume of fire. Its magazine is fairly big - 40 shots, like the TEK Z-10, but it fires so much faster that it tends to burn off its ammunition much quicker. Used carelessly, it can quickly exhaust the ammunition reserves, especially when dual-wielded.

When first used, the D4TH Blossom seems to be something of a wash, since it takes a large number of rounds to bring down an enemy with it (like most SMGs), has somewhat meager accuracy due to its tendency to spray, and tends to deplete ammunition rapidly.

Fortunately, its upgrades make the D4TH Blossom remarkably dangerous. Its first upgrade expands its magazine by 50%, boosting its magazine capacity to 60 shots and reducing the problem it has with running out of ammo so quickly. Subsequent upgrades improve its firepower and reduce its recoil; the final upgrade reduces recoil further and gives it armor-piercing rounds, which penetrates the hulls of light vehicles to hit targets behind them (I.E. it can shoot through a door to hit a driver), and allow it to puncture Riot Shields. 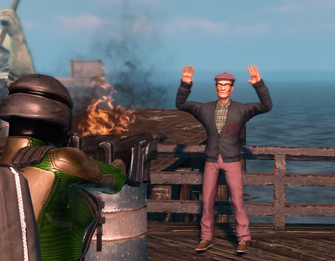 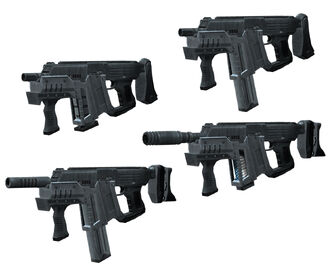 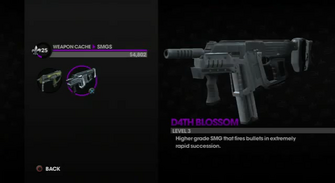 The D4TH Blossom in the weapon selection screen 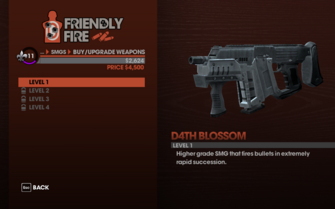 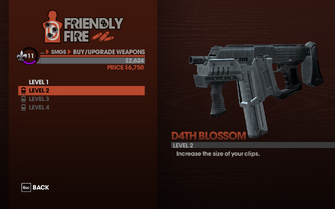 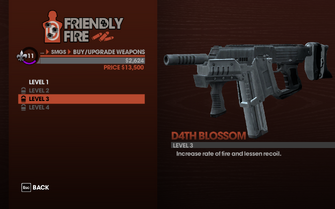 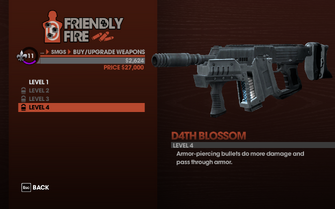 This article contains no references. See Help:Cite.
Retrieved from "https://saintsrow.fandom.com/wiki/D4TH_Blossom?oldid=406796"
Community content is available under CC-BY-SA unless otherwise noted.