The Crowbar is a melee weapon that is featured in Saints Row and Saints Row 2.

It is stronger than the Baseball Bat in Saints Row, but slightly weaker and has a shorter range in Saints Row 2. It shares the attack animation of the Machete, and has no execution animations.
This weapon is commonly used by Brotherhood gang members. 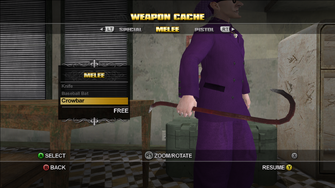 This article contains no references. See Help:Cite.
Retrieved from "https://saintsrow.fandom.com/wiki/Crowbar?oldid=416500"
Community content is available under CC-BY-SA unless otherwise noted.