City Income is earned from controlled neighborhoods and owned stores.

The Stash, also known as Safe, is a Crib feature which allows collection of City Income in Saints Row and Saints Row 2. It is found in all Cribs except docks and the Airport Hangar.

In Saints Row: The Third, it is replaced by the Cash menu in the Cellphone.

In Saints Row IV, the Cash menu is renamed Cache, which sounds the same in some pronunciations.

It is only possible to make withdrawals, and all money is taken out at once.

The maximum amount of Cash the Stash can hold starts at $2000 with the first Crib, and doubles with every Crib unlocked. With all 4 Cribs, the Stash can hold a maximum of $16,000, this limit is reached after 54 hours of game time. Since one game minute equals one real second, it takes approximately 54 minutes of real time to reach the limit.

The maximum amount earned per game day is $42,900 after conquering all neighborhoods and buying all stores.

The amount that the Stash can hold at once varies depending on the number of owned Cribs.

All 11 Cribs are counted to increase the Max Stash, but the Max Stash stops increasing after 1,000,000 - which is reached when the 7th crib is acquired.

In Saints Row: The Third, city income is generated every 15 minutes of played time, and is generated based on Store Ownership, Property Ownership, and which territories are controlled by the Saints, as well as various bonuses.

No particular Crib has a set Transfer Limit increase, it is determined by the total number owned.

As the player gains levels, the income rate can be increased through purchase in the Upgrade menu. The payout is proportional to the amount of hacked stores, activities, random engagements with the Zin and completion of quests. Other factors play in as well.

After completing the game, unclaimed income is capped at $80,000.

The wait time is the same as Saints Row: The Third. 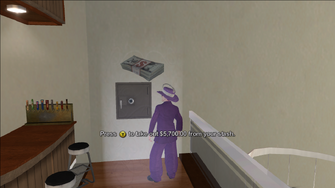 Stash in the King Penthouse 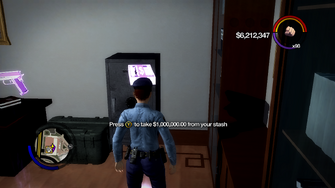 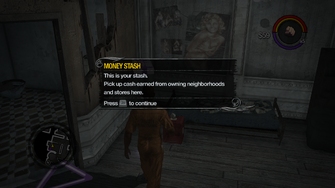 This article contains no references. See Help:Refs.
Retrieved from "https://saintsrow.fandom.com/wiki/City_Income?oldid=427680"
Community content is available under CC-BY-SA unless otherwise noted.