"Charlestown Warehouse" is a Stronghold in Saints Row.

Head over to the docks, Troy got a tip that the Carnales called in a heavy hitter from out of town, make sure he never gets a chance to hook up with Lopez.

Julius Little phones The Protagonist and briefs them on killing a couple of hitmen who Angelo Lopez intends to replace Victor Rodriguez.

After the death of Victor, Angelo was desperate to bring in some backup. A tip from Troy revealed that Lopez was to meet with the hired thugs at a Charleston [sic] warehouse, allowing you to assassinate the hitmen before they were ever able to meet with Lopez.

Take over the warehouse complex from Los Carnales.

The first objective is to kill 6 Carnales members loitering outside the warehouse complex.

Defend the complex from constant waves of Carnales for two minutes. They appear in small groups from the north and south, but they are also easy to dispose of. Nevertheless, having Homies here can help.

The bosses are here. Take them out!

After the two minutes pass, the two hitmen arrive. These hitmen both come equipped with an RPG Launcher each and have a vast amount of health, making for a considerably challenging battle for those who may not have a lot of weapons. After a fair amount of ammunition, each hitman goes down, and the Stronghold is completed. 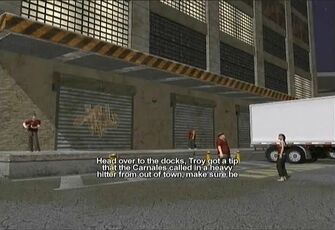 The warehouse complex where the Stronghold takes place

This article contains no references. See Help:Cite.
Retrieved from "https://saintsrow.fandom.com/wiki/Charlestown_Warehouse?oldid=413257"
Community content is available under CC-BY-SA unless otherwise noted.