"Cecil Park Drug Lab" is a Stronghold in Saints Row.

Dex found another Carnales drug lab. Take it out.

Julius Little phones Playa and briefs them on destroying another drug lab belonging to Los Carnales.

A phone call from Julius revealed the location of another Carnales drug lab hidden inside the Cecil Park Powerplant. As you worked your way through the plant you were able to destroy all remaining pieces of lab equipment, crippling what was left of the Carnales drug empire. While the Carnales dispatched reinforcements to stop you, you had no problem stopping them.

Kill the Carnales on the surrounding rooftops.

Afterwards, some Carnales show themselves on opposite rooftops in an attempt to ambush the player. Although they are easy to dispose of because their aim is slow and inaccurate, a few of them wield RPG Launchers, although these do not kill the player in one hit.

Backup is on the way, take out the lieutenant.

Finally, after killing all enemies on the rooftops, one last wave of reinforcements arrive along with a lieutenant. This last wave is easy to kill and the lieutenant does not put up much resistance. 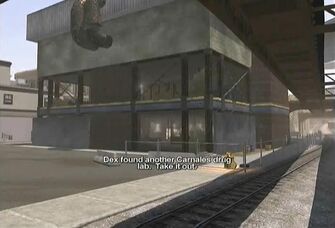 The building where the Stronghold takes place

This article contains no references. See Help:Cite.
Retrieved from "https://saintsrow.fandom.com/wiki/Cecil_Park_Drug_Lab?oldid=422938"
Community content is available under CC-BY-SA unless otherwise noted.