CID is a character in Saints Row IV and How the Saints Save Christmas.

CID was once some sort of alien life form, who was enslaved by Zinyak in a simulation. His physical body perished long ago, so he programmed his consciousness into the simulation itself.[2] Though he is a condescending pessimistic opportunist who only works for Playa in a mercenary manner, never fully trusting him or giving him anything for free, he always keeps his word and remains a consistent ally. Playa compensates CID with a physical body, the completion of various tasks in the simulation, and a date with Shaundi. Towards the end of the game, he and the virtual Fun Shaundi find that they have good chemistry and agree to a date. When Fun Shaundi asks if he functions as a bong, CID is uncharacteristically generous and says "For you, I would find a way".[3] CID takes precautions to protect only himself, and as he delivers the key he excludes Playa and the Saints from his exacting revenge, and tells Playa not to ruin his moment of revenge.[4]

Attitude wise, CID expresses prejudice towards humans during his first encounter with Playa,[2] and is critical of Playa's selfish and inconsiderate nature especially. Despite this, he makes inconsiderate and selfish demands himself, including asking dates from female crew members as compensation. While he does chose Shaundi for his date and later gets another date from Fun Shaundi, his first request is Kinzie who refuses to date the C.I.D. bot, and when recruited along side Kinzie, he asks again and lies to her about having so much in common with, which Kinzie is able to spot.[5] Although it is unknown how well his date with Shaundi went as they don't interact with each other outside Homie conversation, he has a good time with Fun Shaundi.[3]

Just before rescuing Ben King, CID zaps Playa in the groin after having an argument with him over an unknown subject, and laughs at Playa's suffering. CID has a Romance option and is able to perform oral sex on both genders.

As a Homie, CID does nothing to help Playa in any way, he only speaks and has homie conversations, he does not fight in battle but follows Playa around. He uses a weapon only in cutscenes.[6]

— CID, during Power Up CID

— CID, during Romance on The Ship

CID: "That is a nice exterior you have."
CID Enemy: "Thank you..."
CID: "Shall we go somewhere private where we can talk, I'd would love to see some of your programming and inner workings."
CID Enemy: "Are you trying to get me to interface?"
CID: "I'm certain you would enjoy it."
CID Enemy: "Alright, but make it quick."

CID: "Permission to speak freely, Mr. Gat?"
Johnny Gat: "Uh, sure..."
CID: "After researching your exploits both on earth and within your own simulation. I have come to a singular conclusion. You scare me..."
Johnny Gat: "Oh, well good."
CID: "That is all, thank you."

CID: "Your file has been most interesting to read, Asha Odekar."
Asha: "My File? What are you talking about?"
CID: "You'd be surprised what the Zin grabbed from Earth's databases before obliterating the planet. They have many pages on you."
Asha: "Oh Really?"
CID: "Yes. They even had information about your earlier self."
Asha: "Oh. Really?"
CID: "Oh yes, I am sure your hometown Eagles were bolstered to many of victory by your forceful cheers, squad captain Odekar."
Asha: "You tell anyone about that CID and I will rip every last resistor off your circuit board with my teeth."
CID: "Of course."

Cyrus: "You know you remind me of some tech our R.N.D department worked up for training exercises in STAG."
CID: "I can understand the need for wanting something with a vast knowledge database and mercenary tendencies in your military training."
Cyrus: "Actually we just use it for moving target practice."

CID: "Did you used to be the Vice President as well?"
Julius: "Come again?"
CID: "There are are several similarities between you and the current Vice President."
Julius: "Why does everyone keep saying that?"

Ben King: "So, why do they call you CID?"
CID: "Because this robotic orb my consciousness is inside is called a C.I.D., a Control and Interface Device."
Ben King: "Not very creative then."
CID: "Actually, I have heard groups of warriors such as ourselves often have someone named Cid who travels with them."
Ben King: "Oh, where have you heard that?"
CID: "From the last fantasy game I saw online."

CID: "Are you sure you do not want to go out with me sometime, Kinzie?"
Kinzie: "Yeah, I'm sure."
CID: "It is just that I have been alone for so long and you and I have so much in common."
Kinzie: "CID, I've been doing this hacking thing for a long time, I can smell bullshit even through a monotone computery voice like yours."
CID: "Well damn."

CID: "Do I make you uncomfortable? If so, I apologize."
Pierce: "What? No, no. Why would you?"
CID: "You are always backing away from me and giving sideways glances as if I am contagious."
Pierce: "Me? No, you must be imagining things CID. Nah, we cool."
CID: "I am glad to hear that. I was hoping I could recharge in your room for a short time."
Pierce: "Wait, what?"

CID: "I have been watching footage of your old fighting matches, Mr. Piper."
Roddy Piper: "We called it wrestling, CID."
CID: "Whatever, it was very similar to an exhibition sport I invented on my home-world."
Roddy Piper: "Oh yeah, ha! Funny how two completely different worlds can create things that are so similar."
CID: "Yes, I am sure it was completely coincidental. You will be hearing from my attorneys, Mr. Piper."

CID: "Why did you cut your hair?"
Shaundi: "What? I didn't."
CID: "The other Shaundi's hair is longer and has much more personality. Why did you change it?"
Shaundi: "Are you saying I don't have personality?"
CID: "I did not mean to..."
Shaundi: "Cool it, CID. I'm just fucking with you. To be honest, sometimes I miss the dreads, they were a hell of a lot easier to maintain."

CID: "How do you manage the logistics of your brothel houses?"
Tanya: "It's really quite simple, if a room is empty, send the next customer in."
CID: "You do not care what sort of proclivities each of your girls or your patrons have?"
Tanya: "Look, sex is sex. What do I care if any of them would rather have something specific, as long as I get paid."
CID: "You are a terrible mistress and should be ashamed."

Veteran Child: "So can you play music or anything useful?"
CID: "Yes, I have quite a large library of music from your world."
Veteran Child: "Anything by the Feed Dogs?"
CID: "Yes."
Veteran Child: "Let's hear it, you pick."
CID: "No."
Veteran Child: "I thought you were some kind of servant robot, so come on, play something."
CID: "The only time I serve anyone is if I get paid, but for Fun Shaundi's ex, I will make an exception and just say piss off." 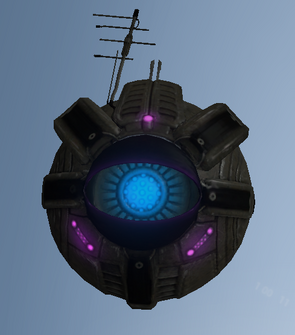 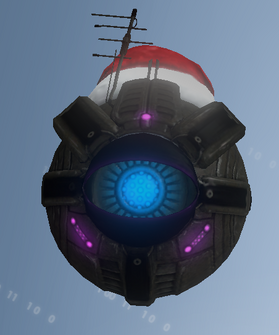 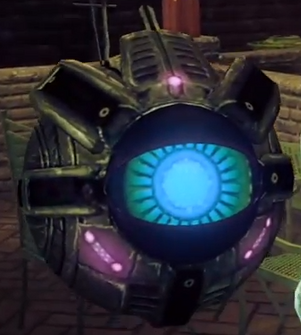 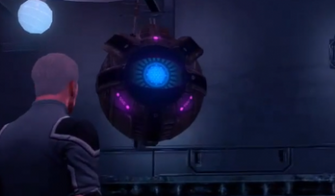 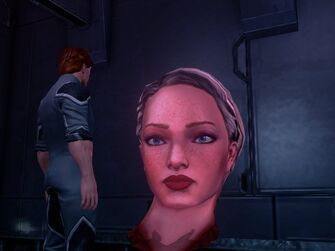 A decapitated head, inside CID's model, visible by manipulating the camera 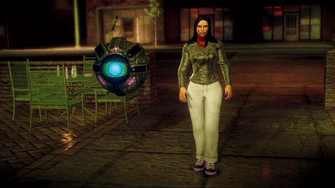 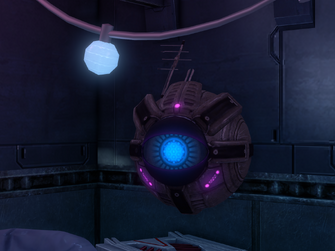 CID in The Ship in Saints Row IV 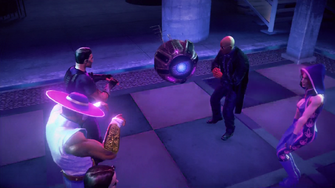 CID, dancing during the curtain call in Saints Row IV 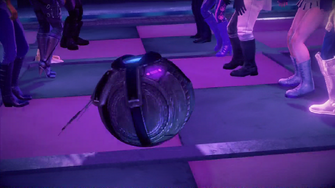 CID, dancing during the curtain call in Saints Row IV

This article contains no references. See Help:Cite.
Retrieved from "https://saintsrow.fandom.com/wiki/CID?oldid=425435"
Community content is available under CC-BY-SA unless otherwise noted.