"Burning Down the House" is the fifth mission of the Sons of Samedi story arc in Saints Row 2.

Playa meets Shaundi at a local frat-party and receives a tip from another of Shaundi's ex-boyfriends, Blake, who saw a number of the Sons of Samedi wheeling chemicals in and out of some buildings, concluding that they are drug labs. Playa decides to go and blow up the drug labs while Shaundi stays behind to get high.[1]

Although Playa is successful, their actions inadvertently lead to a massive fire that spreads across Shivington. The General and Mr. Sunshine watch the chaos from a nearby rooftop. The General worries that with the razing of their farm[2] and now these drug labs, he cannot afford to have anything go wrong with the next shipment. With all the trouble they have caused, Mr. Sunshine suggests that it's time to speak with the 3rd Street Saints' leader.[3]

What began as innocuous raid on drug labs run by the Sons of Samedi has ended in unimaginable tragedy. In their continued quest for dominance, the Third Street Saints descended onto the Samedi territory intent on destroying the Samedi Loa Dust labs in the projects of Shivington. In the resulting chaos, it is assumed that the fire from one of the labs continued to spread until the entire neighborhood was engulfed in flames. Witnesses say they have never seen anything like it, and many are suspicious about the city's claims that nothing could have been done to prevent it.

This mission involves going to four individual locations to destroy the Loa Dust drug labs there. Every time a location is cleared, the Sons of Samedi Notoriety increases, making it tougher to get to the next location.

Head to the first location.
Destroy the dust labs

The first location is a small building which takes seconds to clear.

Head to the second location
Destroy the dust labs

The second location is a much larger building with two floors; the drug lab is on the top floor, which can be reached via a staircase at the right of the building.

Head to the third location
Destroy the dust labs

The third location can be driven downwards.[what?]

The door is locked, find a way to flush them out

One of the drug labs there is behind a locked door - flip the switch to open the door and flush the people inside out.

A Samedi Churchill with four gang members arrives to the third lab after it has been destroyed.

Head to the fourth location
Kill the lab technicians

Get the key
Destroy the dust labs

The final drug lab often explodes due to enemy gunfire.

Chase down the lead technician

Exit the building at the back to witness the last lab tech try to escape in a vehicle. The game may freeze for a moment after kicking the door open.

Although there is a vehicle parked nearby to encourage a vehicle chase, it is possible to destroy the technician's car with enough firepower.

Jane Valderamma: "Chaos. It's the only word fitting to describe the results of the conflageration that's consuming Shivington. Earlier tonight a series of meth labs exploded creating a chain of events that is nothing short of catastrophic. As the neighborhood burns, emergency teams are desperately trying to treat any one they can find. As burn wards throughout the city get filled to capacity, one has to wonder. What sort of sociopath could be responsible for causing this. I'm Jane Valderamma, channel 6 news."

— Playa, after shutting off the ventilation system

— Playa realizes Shivington is alight, as the final lab tech drives away.

— Playa, after destroying a lab

— Playa, after approaching the locked lab

— Playa, after the lights go out

"Eye of the Beholder" cutsceneEdit


— "Eye of the Beholder" cutscene 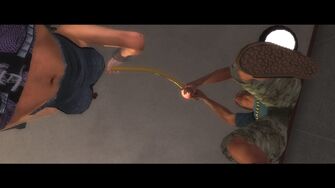 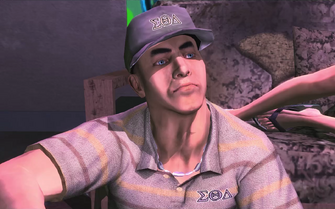 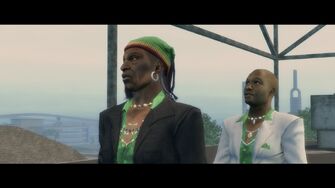 Mr. Sunshine and The General 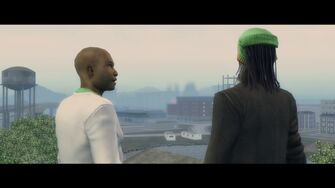 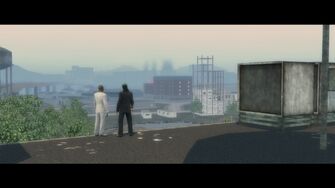 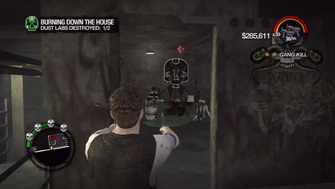 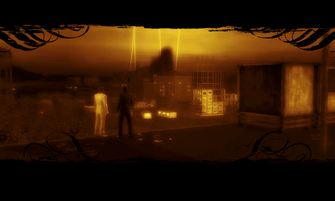 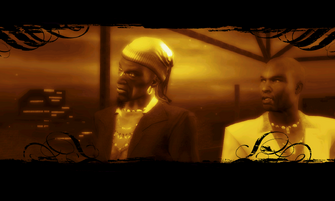 Loading screen used after completing this mission Bleeding Out 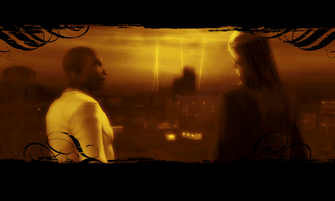 This article contains no references. See Help:Cite.
Retrieved from "https://saintsrow.fandom.com/wiki/Burning_Down_the_House?oldid=425063"
Community content is available under CC-BY-SA unless otherwise noted.