"Black Bottom Refinery" is a Stronghold in Saints Row.

I don't think the Carnales have gotten the message that the Saints are here to stay. Tag up their refinery, I want those bitches to see our sign wherever they look.

Julius Little phones The Protagonist and briefs them on tagging up a refinery owned by Los Carnales.

Killing Hector Lopez was a demoralizing blow to the Carnales, in an effort to further crush their morale, Julius sent you to tag up the Black Bottom Oil Refinery. While the refinery was heavily guarded, you still managed to paint 3rd Street tags all over the it...now what was once one of their most fortified strongholds has been turned into a giant 3rd Street Saint billboard.

The goal of the mission is to move along the oil refinery tagging 7 marked graffiti tags. Look out for explosive barrels and make sure to kill any nearby enemies before beginning to tag. This is not a challenging Stronghold, but it is easy to fall off and get Smoked after completing the Stronghold. 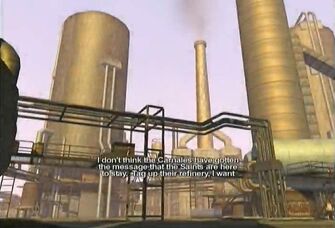 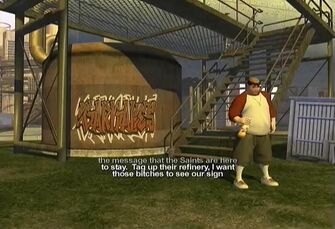 One of the seven tag spots

This article contains no references. See Help:Cite.
Retrieved from "https://saintsrow.fandom.com/wiki/Black_Bottom_Refinery?oldid=413256"
Community content is available under CC-BY-SA unless otherwise noted.