Base Jumping is a Diversion in Saints Row 2 and Saints Row: The Third.[1]

Attempt to land as close to the marker as possible to get respect.

— Base Jumping introduction in Saints Row 2[2]

In Saints Row 2, the goal of Base Jumping is to land within a bullseye while parachuting. Landing in centre of the bullseye earns 3 Gold Stars and unlock the "no falling damage" reward.

It is possible to slow The Protagonist's descent, which is incredibly helpful. Over-shooting the bullseye and turning around does not prevent earning the maximum of 3 Gold Stars - the only thing that counts is where they land; so the earned stars can go up and down depending on the current distance from the center of the bullseye (which is unusual when earning Stars).

Base Jumping is featured in the "Room Service" mission, in which the final objective is "climb the rail and base jump into the atrium" at the top floor of the Tohoku Towers to escape an explosion. However, it is not a mission requirement to deploy the parachute, and there is no target on the ground.

However, as in Saints Row 2, the option to begin the Base Jumping Diversion appears only after deploying the parachute.

While the parachute can be deleted from the Wardrobe, the option always appears when falling from a great height. The last backpack used is shown when the parachute is deployed, regardless or whether it is currently in the Wardrobe. 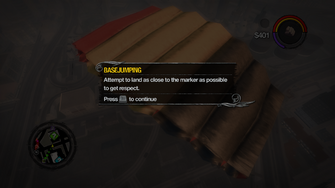 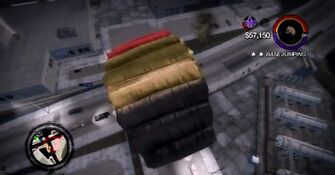 The player slowly descends downwards. Note the target on the lower left mini-map on the HUD

After landing directly in the center, the player is awarded the "Reduced Falling Damage" reward 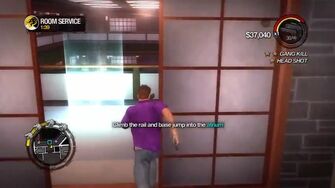 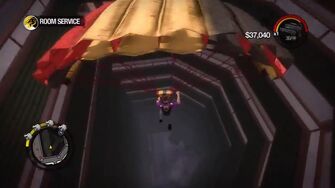 This article contains no references. See Help:Cite.
Retrieved from "https://saintsrow.fandom.com/wiki/Base_Jumping?oldid=328435"
Community content is available under CC-BY-SA unless otherwise noted.