"Assault on Precinct 31" is the tenth and penultimate mission of the Sons of Samedi story arc in Saints Row 2.

Playa and Shaundi discuss their plans on how to get to The General and finish off the Sons of Samedi. Shaundi recommends they tap into the traffic cameras at the Police Headquarters to find The General's Hounfor. Playa is again resistant to bring Shaundi along with them, but admits they do not know how to hack the cameras there, so Shaundi comes along.[1]

After donning the disguise of repairmen, the two succeed in hacking the monitoring system, but must fight their way out of the station and back to the Saints Hideout. Once there, Playa has the 3rd Street Saints set up the camera system and tells their gang they want someone watching it until The General is located.[2]

Members of the Third Street Saints disguised as camera repairmen infiltrated the police station today, but were chased off the premises before any real damage was done officials say. The Saints managed to make their way to the security room before the station was put on full alert. After a brief firefight, the Saints retreated. Casualties are said to be low. Exactly what the Saints were interested in has yet to be determined.

In one of the hardest missions in the game, "Assault on Precinct 31" begins fairly easy.

There is a three minute timer to get to Saint's Row and locate the NRG V8 repair van.

There are three ways to hijack the repair van: killing the driver, causing enough damage that the driver flees, or simply entering it.

It is possible to skip this objective by shooting the van from a distance, immediately activating the next objective.

If the van gets too far away, there is a 30 second timer to catch up.

Park the van at the Police Station

Drive to the Police Station.

During this objective there is a hint to not show weapons in the Police Station, and the equipped weapon automatically changes to fists.

Get to the terminal

This objective only appears if Notoriety is gained before completing the Enter the Police Station objective. The GPS shows the destination

If this objective is triggered, Notoriety is increased to level 4, and the next two objectives are skipped.

Check in at the front desk

There is a marker in front of the front desk that triggers a short cutscene.

This objective is completed either by entering the marker, entering any other door, drawing a weapon, or acquiring Notoriety.

Completing this objective by any means other than entering the marker triggers level 4 Notoriety.

Go to the camera room on the fourth floor

Idling at the front desk for too long causes the police to become hostile, triggering level 4 Notoriety.

After a few seconds, level 4 Notoriety is added if it wasn't already.

Shaundi must be defended against a few waves of police officers. Unfortunately, Shaundi takes a long time to hack into the system, and there is not a constant stream of police, so there is a lot of waiting. A SWAT unit arrives on the heliport after a while and attack from behind if the roof door is open; they are just as easily killed, however.

Escort Shaundi out of the police station

Shaundi mentions that there is a helicopter on the roof, but it is not a mission requirement to use it.

Get the equipment back to the hideout

After exiting the police station, the real challenge of this mission begins: reaching the Saints Hideout with four units of police Notoriety and a Tornado chasing closely behind.

The final checkpoint in the mission is just before Shaundi began the hack - there is no checkpoint when she finishes. Shaundi recommends taking the helicopter: doing it is difficult in the patched version of the game, as Tornados fire rockets, and the Oppressor is very weak to rockets and has no way of defending itself; if and when the Tornado fires a rocket, it can destroy the Oppressor very quickly.

Destroying the Tornado before getting into the Oppressor is a risky strategy. It takes a lot of damage, and another Tornado eventually spawns, so it is important to reach the Saints Hideout quickly after the Tornado has been destroyed. A McManus 2015 can shoot off the Tornado's rocket launchers to prevent them being used.

Another strategy is to ignore Shaundi and pay attention to the marker on the map instead. Go downstairs and exit the building, and grab a FBI or Bear instead. Quickly follow the GPS route towards the Saints Hideout but, on the way, be sure to use the Forgive and Forget confessional located on the left of the road. With luck and patience, this mission may prove no harder than any other.

This mission can be failed by killing Shaundi, abandoned Shaundi, losing the van, or destroying the van.

"Where's the Fun in Easy?" cutsceneEdit

Shaundi: "You gonna stand there, or you gonna work out?"
Playa: "I get enough cardio running from the cops."
Shaundi: "Suit yourself."
Playa: "I'm surprised you can run 5 minutes without coughing up a lung, let alone 5 miles."
Shaundi: "I'm full of surprises."
Playa: "Then surprise me and tell me how we're gonna take out The General...."
Shaundi: "Well, that creep's always riding around in that limo of his, right?"
Playa: "Yeah..."
Shaundi: "So I figure the easiest way to find him is to go and tap into the traffic cameras at the police station."
Playa: "I don't know if "easiest" would be the word I'd use."
Shaundi: "Alright so it's not the easiest way but it's the quickest...besides now I get to tag along."
Playa: "Are you high? Or do you not remember the part where I told you that I wasn't gonna babysit you?"
Shaundi: "OK, so you're gonna hack into the traffic cameras then?"
Shaundi: "Yeah, that's what I thought...let's go boss."

They're not gonna let us walk in dressed like this, we gotta get some disguises.

— Shaundi, at the start of the mission

— After hijacking the van


— On the way to the police headquarters.

Before we go in the station remember to put your piece away, most repairmen don't wave around guns..

— Shaundi, upon arriving at the police headquarters.

Alright lets get to the control room...

OK just give me a minute...

We're done, let's get the hell out of here!

It's done, let's get outta here.

Keep me covered, this thing's heavy...

There should be a helicopter on the roof, let's go

We gotta work fast if we plan on beating that alarm...

Are you crazy? Leave me alone!

OK, if we're gonna do this the first thing we're gonna need is the gear to tap the traffic cameras...

We better hurry, who knows how long it will be before they check our credentials...

Playa: "Alright people, here's the deal. We got a truck full of electronic shit that I don't know how to use...I want you guys to help unload the truck and set up shop here. Once we're up and running I want someone watching these monitors 24-7; the moment someone sees that fucking limo I wanna know about it...let's get to work."
Playa turns to Shaundi
Playa: "This is going to work right?"
Shaundi: "Probably."
Playa: "You had me break into a police station for something that would probably work?"
Shaundi: "Well, ya know, I thought it would be good times."
Playa: "Thanks Shaundi."
Shaundi: "Any time."

Playa and Shaundi at the gym 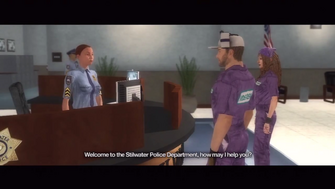 Playa and Shaundi at the Police Station

Shaundi and Playa at the Saints Hideout 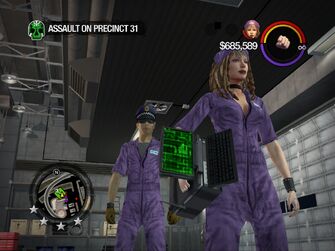 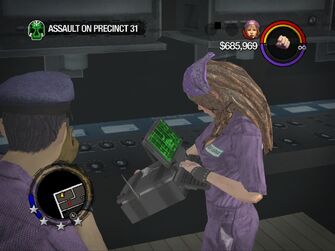 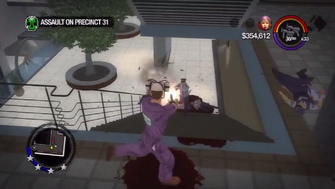 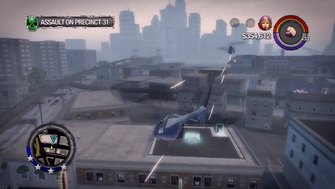 Further gameplay from the mission 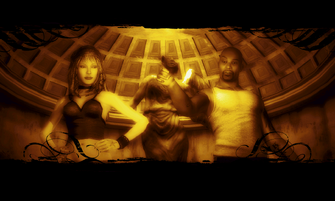 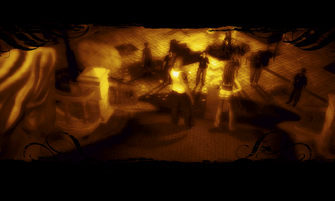 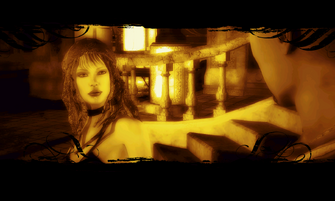 This article contains no references. See Help:Cite.
Retrieved from "https://saintsrow.fandom.com/wiki/Assault_on_Precinct_31?oldid=425002"
Community content is available under CC-BY-SA unless otherwise noted.