"Appointed Defender" is the second mission in Saints Row 2.

Following Carlos' advice from the end of the previous mission[2], Playa heads to Tee'N'Ay in an effort to find out what's been happening these past five years.[3] They quickly learn of Johnny Gat's fate, who is to be sentenced later the same day.[4]

Playa quickly heads to the courthouse downtown where, after rescuing Gat, together they escape the police and head to Aisha's house. On the ride there, Gat fills Playa in on what has happened to other former allies: Troy's the Chief of Police, Julius Little is missing, Benjamin King wrote an autobiography, Regicide, and Dex is alluded to have done something so bad Gat asks Playa to not "get me started with Dex".[5]

In a stunning turn of events, Johnny Gat has escaped custody moments after being convicted of multiple counts of 1st degree murder. After the guilty verdict was read; an armed assailant, who is presumed to have recently escaped prison, burst into the courtroom and freed Gat. The pair then managed to fight their way out of the courthouse and lost their police pursuit somewhere Downtown. The attack has left numerous dead, including one judge.

This mission begins without an opening cutscene. Go to Sloppy Seconds and buy some Clothing.

It is not possible to fail the mission by shooting the shopkeeper. Changing clothes is not required. There is no penalty for wearing the same clothes; wearing a prison jumpsuit never attracts police attention.

Proceed to Tee'N'Ay, where a cutscene plays.

Get to the courthouse

After the cutscene, a Gang Notoriety tutorial is displayed, and two members of The Brotherhood attack, picking up bar stools and Improvised Weapons; killing them is not a mission objective.

On the way out, two Brotherhood members enter and attack, this time armed with a Crowbar and Baseball Bat, killing them is not a mission objective.

If not killed, it is possible for The Brotherhood to follow Playa to the courthouse, and remain outside.

The trial is over in 4 minutes, get to the courthouse

Once outside, there is a four minutes timer to reach the courthouse in the Downtown District. A nearby Compton is marked, but it is not a requirement to use it.

Find the courtroom where Gat is located

Once one reaches the courthouse, the timer stops. Head inside, go up the stairs to the left and follow the corridor to the right to reach Gat inside Courtroom A.

Police inside the courthouse are not immediately hostile.

Escape with Gat (and Legal Lee in Co-op)

The door Playa uses in the cutscene leads to an office with no other exit - the only way out is through a series of corridors, blocked by a hostile Tombstone-totting Judge Melmack and multiple guards. Once at the cafeteria, clear the floor of all opposition, and leave through the entrance.

Go to Forgive and Forget

Get in a nearby vehicle, there is an Anchor, Five-O and Peacekeeper parked nearby. Follow the route laid out on the Map to reach Forgive and Forget - this is not the closely Forgive and Forget, and while other locations clear Notoriety, it immediately begins rising.

A news Oppressor follows the car until this objective is complete, regardless of Notoriety, but can be destroyed.

During the drive banter, Playa explicitly mentions making a visit to see Troy, whose office is at the Police Headquarters, which is a clue regarding the bonus mission "Revelation".

In Co-op, Legal Lee is also a Homie, which means a four-seater vehicle is needed, or two separate vehicles. Only one player needs to go through the Forgive and Forget to clear the Notoriety.

Drive to Aisha's house to finish the mission. There is no penalty for regaining Notoriety before arriving.

In Co-op, both players must reach Aisha's house to finish the mission.

Following the mission is an activity tutorial, as the next mission, "Down Payment", cannot be started before gaining Respect through Activities and Diversions.

Jane Valderamma: "I'm standing here now outside the courthouse, and it is a media circus. Every major news outlet is here hoping to be the first to cover the result of this historic trial. While there has been speculation that Troy's failure to appear as a witness is testiment[sic] to his loyalty to his gangland roots, others claim that it is nothing short of naked fear for his life that keeps him from entering the same room as Johnny Gat. One thing is for sure, the saga that has been the Johnny Gat trial...is coming to a close. I'm Jane Valdaramma[sic] , channel 6 news."

Jane Valderamma: "It was an ending more dramatic than a movie of the week, and more violent than a Charles Mueller film but the Johnny Gat trial has finally come to a close. Earlier today the formerly comatose leader of the Saints burst into the Stilwater Courthouse guns blazing, leaving Justice not only blind but gut shot as well. As the odds of our city plunging into gang violence rise the one safe bet is this: the only people happy about what happened in the courthouse, is Friendly Fire. I'm Jane Valderamma, channel 6 news."

Playa sits at the bar and orders a 40Oz. On the TV, Jane Valderamma is reporting from outside the courthouse.
Jane Valderamma: "It's said by some, to be the trial of the century. A notorious member of a gang once known as "The 3rd Street Saints", Johnny Gat was arrested last year in an assassination attempt against then decorated police officer Troy Bradshaw. In the resulting trial, Gat was convicted of one count of attempted murder, and a staggering three hundred eighty seven counts of 1st degree murder...promptly sending him to death row. Over the past year Gat's legal team has filed appeal after appeal-"
The Brotherhood gang member: "Hey Barry, turn this shit off!"
The Bartender turns the TV off.
Playa: "I was watching that."
The Brotherhood gang member: "I guess you're not anymore, are ya bitch?"
Playa lowers their head, but then grabs the Brotherhood gang member's beer bottle and smashes him across the face with it.
Playa: "Could ya turn the TV back on?"
Jane Valderamma: "In a few short moments, we'll be allowed back in the courtroom and we'll find out once and for all if Mr. Gat will go home a happy man, or a dead one. Back to you Jack."
Playa: "Oh shit..."
The Brotherhood gang member (unused): "That's the cunt that hit me!"

Judge Melmack: "Mr. Gat, you've been convicted of over three hundred murders, do you really expect this appeal to work?"
Johnny Gat: "I figure with the statute of limitations it really should be closer to two fifty."
Judge Melmack: "There's no statute of limitations for murder!"
Johnny Gat: "Why the fuck not?"
Judge Melmack: "Watch yourself Mr. Gat."
Johnny Gat: "Or what, you'll hold me in contempt of court? You're already planning on giving me the chair, you think I give a shit about you not liking me? Fuck off..."
Judge Melmack: "I'm curious if you can keep your cavalier attitude when 2000 volts are running through your body."
Johnny Gat: "Oh yeah? And I'm curious if you can keep acting like a douche bag when I shove that gavel up your ass."
Legal Lee: "My client would like that stricken from the record..."
Gunshots are heard outside the courtroom.
Judge Melmack: "What's that?"
One of the guards draws a VICE 9 and moves to check out the disturbance, only to be knocked over by Playa kicking the door down on top of him. The other guard moves to check on him, but is held up by Playa.
Playa: "Drop it."
He does so. His gun goes off upon hitting the ground, making everyone except Gat panic and hide. Legal Lee then pokes his head back out for a moment:
Legal Lee: "Anyone hit and need a lawyer?"
Playa grabs the keys to Gat's handcuffs off the first guard's belt and tosses them to Gat.
Johnny Gat: "Shit, 'bout time your burnt ass woke up..."
Playa: "You ok Johnny?"
Johnny Gat: "Yeah, aside from almost getting sent to the chair I'm fuckin' great...hey you look different, you do somethin' with your hair?"
Playa: "You ready to get outta here?"
Playa hands the gun stolen from the first guard over to Johnny, then turns to lead the way back out.

Johnny Gat: "Thanks for bustin' me out, Eesh woulda killed me if I got executed."
Playa: "You still with Aisha?"
Johnny Gat: "Yeah. I mean, it got a little tricky what with me on death row and her being on the DL after faking her own death but, ya know, we found a way to make it work."
Playa: "How long were you in jail anyway?"
Johnny Gat: "Two years and 31 days."
Playa: "Not like you were counting..."
Johnny Gat: "Yeah, right? It's weird...people inside were betting how long I'd last...when I was first busted guards were always tryin' to put me in the ground. After Troy became chief of police it all stopped...Troy must be more forgiving than I am."
Playa: "Troy's the Chief of Police?"
Johnny Gat: "You better start getting with the times. Julius is missing, Ben King wrote an autobiography, Dex is a...don't even get me started with Dex...but the real kicker is Troy. In a couple months he went from undercover cop to chief of police...and word is he's become obsessed with finding out what happened on your little boat trip with the Alderman."
Playa: "If I get some free time I might swing by the station and say hello..."
Johnny Gat: "With these cops on our ass, you might not have to wait long..."
Playa: "Is forgive and forget still open?"
Johnny Gat: "Time's changed, but not that much..."
Playa: "Good to know the world's not totally crazy..."

— After attempting to take Legal Lee as a Human Shield

— Gat, between the "Gavel" line and "burnt ass" line 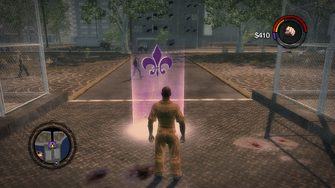 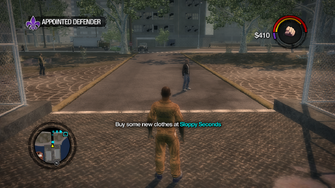 Playa gets in a short fight with a Brotherhood gang member 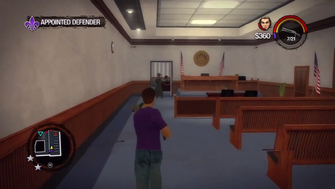 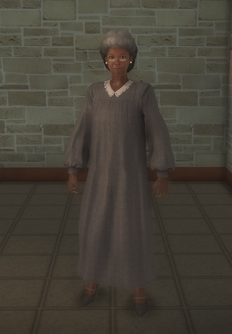 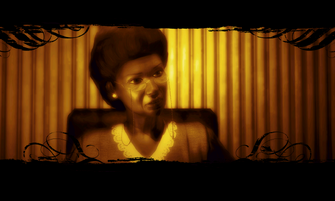 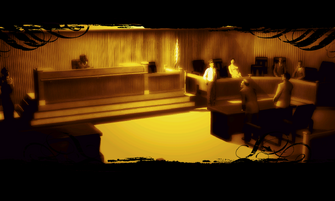 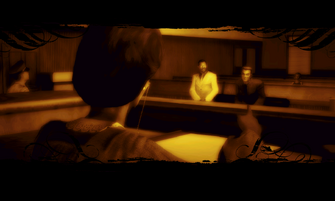 This article contains no references. See Help:Cite.
Retrieved from "https://saintsrow.fandom.com/wiki/Appointed_Defender?oldid=424937"
Community content is available under CC-BY-SA unless otherwise noted.