Angel De LaMuerte is a character in Saints Row: The Third.

Angel is a Mexican-American former Luchador and member of the 3rd Street Saints. In his glory days, he was once a tag-team partner to the famous Luchador and his partner-in-crime, Killbane, which Kinzie mentions after Zimos has been rescued.[2] Soon after, they formed a gang in Steelport called the Luchadores, made up of masked wrestlers who use heavy weapons and loved fistfights. As the gang grew larger, Killbane became angry and jealous of Angel's respect in the gang, therefore causing him to unmask Angel, causing him great shame.[6]

After Kinzie mentions Angel as a useful anti-Syndicate talent to The Protagonist, he rescues Angel from an attack by The Luchadores at his gym.[7] Angel is assigned to help The Saints eliminate The Luchadores, with Angel's background as a former Luchador making The Protagonist persuade him into acting as a personal trainer to them for a potential match against Luchador leader and Angel's former tag team partner Killbane.

After assigning several exercises to The Protagonist, they devise a plan to kill the other wrestlers in Killbane's Murderbrawl XXXI pay-per-view so Killbane will be forced to fight The Protagonist. They kill them with Kinzie's RC Possessor, which makes the killings look like accidents.[8] However, Angel convinces The Protagonist to let him fight Killbane instead, insisting he trained for a fight with Killbane while in hiding. To get ready, he retrieves his mask from the 3 Count Casino.[6]

Angel fights Killbane at the pay-per-view with The Protagonist in his corner, but is injured after being powerbombed out of the ring. Angel encourages The Protagonist to fight Killbane, where The Protagonist wins by either unmasking Killbane or forcing him to submit, and they celebrate.[9]

In the game's finale, Angel calls The Protagonist, informing them that Killbane is fleeing the city and that he is pursuing him. The Protagonist is given the choice to help Angel or save Shaundi, Viola DeWynter and Burt Reynolds, who are being held hostage by STAG at a hostage rigged to explode and frame The Saints as terrorists.[10]

If Killbane is killed, Angel attends the eulogy for Shaundi, who died when the monument exploded, but STAG attacks Steelport with the Daedalus after receiving authorisation from Monica Hughes. After The Protagonist destroys the Daedalus, killing STAG leader Cyrus Temple, Angel is present as The Protagonist declares Steelport an independent city-state.[11]

If Shaundi is saved, Angel's fate is unknown, as he does not appear for the remainder of the mission or the ending mission Gangstas in Space.

The events of Saints Row IV follow from this ending.[12][13]

Angel has short brown hair and his casual clothing consists of a purple hoodie, torn up black wrestling tights, a white kneepad and yellow boots. He also wears his purple mask after retrieving it back from Killbane.

I'll be right there.

— when called for assistance in Saints Row: The Third

Angel: "It's been a long time, Reynolds."
Burt: "Do I know you?"
Angel: "Mexico, '96. Murderbrawl XIII."
Burt: "Oh. You look... different when you're not unconscious."
Angel: "I underestimated you. I thought you were just an actor. I didn't realize you were the man who trained Bear Trap Calhoun."
Burt: "Not your fault, kid. The Cutter can come from anywhere."

Josh: "So Angel, I've been looking for a personal trainer while I'm in Steelport. You game?"
Angel: "I'll train anyone who wants to learn."
Josh: "Excellent. So what do you wanna start with? Conditioning? Pilates? Yoga?"
Angel: "Punching beehives."
Josh: "Wh-what?"
Angel: "Before we can train your body, we need to train your mind."
Josh: "Yeah... yeah... I love it."

Kinzie: "So you spent years in hiding, huh?"
Angel: "Yes."
Kinzie: "I understand, I wanted to do that too."
Angel: "So you know what it is to feel shame beyond all measure?"
Kinzie: "No, I was really into Y2K."
Angel: "Please don't talk to me."

Angel: "You're consumed by something - what is it?"
Shaundi: "Revenge."
Angel: "For your friend?"
Shaundi: "Johnny was with the Saints longer than anybody; he was more than a friend - he was family."
Angel: "And what are you gonna do to avenge him?"
Shaundi: "Whatever it takes."
Angel: "I knew I liked you."

Angel: "Hello, Viola."
Viola: "It's been a while."
Angel: "How could you stand by Killbane after what he did to me?"
Viola: "It was business, Angel. You lost."
Angel: "I was cheated!"
Viola: "Just because something's not fair doesn't mean it didn't happen. If you couldn't live with the consequences, you shouldn't have agreed to the match."
Angel: "I just didn't think, even if he won, Killbane would humiliate me like that."
Viola: "I'm gonna tell you a secret: Killbane's an asshole."

Zimos: "The Syndicate fuck you over too?"
Angel: "Yes, Killbane. You?"
Zimos: "Viola and Kiki."
Angel: "Don't worry, we'll have our revenge." 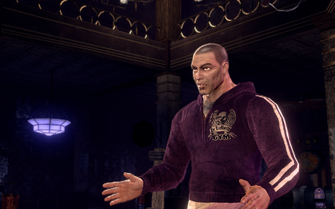 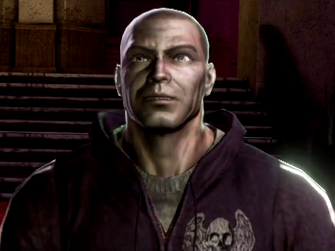 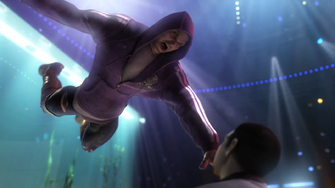 Angel in the Saints Row The Third Power CG trailer 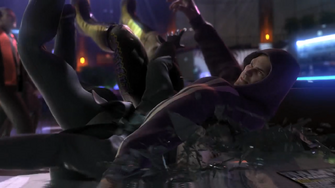 Angel slamming a Morningstar member into a table in the Saints Row The Third Power CG trailer.png 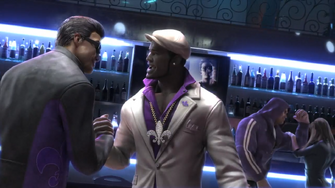 Angel (back) at the Saints' hideout in the Power CG trailer 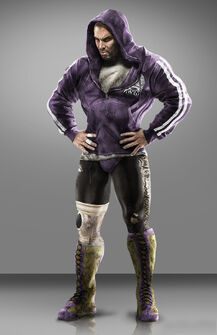 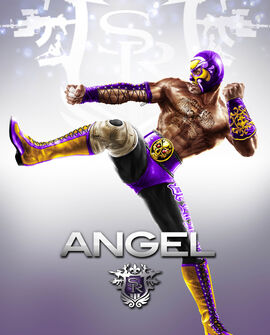 Promotional artwork of Angel, masked and in wrestling gear 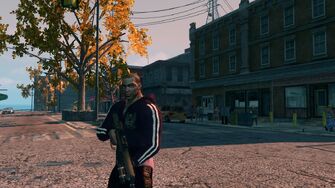 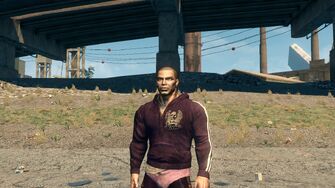 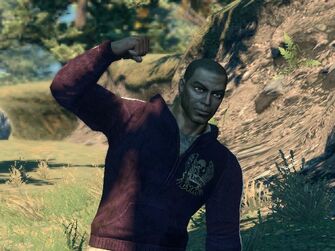 Angel as a homie, complimenting 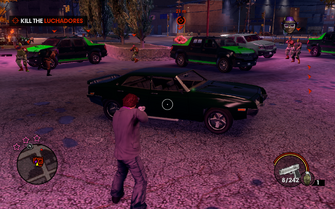 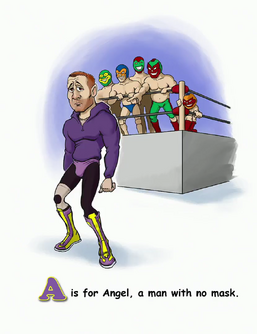 Angel is featured under A in The ABCs of Saints Row

Retrieved from "https://saintsrow.fandom.com/wiki/Angel_De_LaMuerte?oldid=416231"
Community content is available under CC-BY-SA unless otherwise noted.