"Always Use Protection" is the third mission of the Vice Kings story arc in Saints Row.

— Johnny Gat to The Protagonist, outside Freckle Bitch's.

The Protagonist meets Johnny Gat and Aisha (now in disguise) outside Freckle Bitch's in Saint's Row. Gat fills The Protagonist in on Tanya Winters, a prostitute who worked her up within the Vice Kings by sleeping with Benjamin King's bodyguard Anthony Green, and Warren Williams behind Green's back. Gat then asks The Protagonist to go and kill Tanya at her brothel in Prawn Court and severely damage the Vice Kings' operations there.[1]

After destroying four patrols and clearing out the brothel, the 3rd Street Saints successfully seize Prawn Court, but Tanya is nowhere to be seen. During a meeting between Benjamin King, Anthony Green, and Warren Williams later, King discusses how they can recoup their losses from recent events. Warren is disgruntled by King's calmness and lack of action, especially after losing Kingdom Come Records, which has set them back "millions".[2] Tanya shows up and reveals she has lost her brothel. King reasserts his authority and tells them of his plan to rebuild the studio, as well as getting Chief Monroe to put some pressure on the Saints so they can retake Prawn Court.[3]

I'll have Monroe put some pressure on the Saints. While they're distracted, it should be easy to take back what's ours. Everything else is business as usual, understood? Now, this meeting is over.

In order to hurt the Vice Kings, Johnny sent you to hit Madame Tanya's brothel in Prawn Court. You dropped all the patrolling Kings as well as those guarding the brothel, but found no sign of Tanya...

The first part of this mission has only one objective.

The first part of this mission requires taking out four Vice Kings patrols driving around the Red Light District. Specifically, they are located around the Bavogian Plaza and Rebadeaux neighborhoods. The patrols immediately become hostile when approached, but they are by no means difficult to kill. Three of the vehicles have just one enemy inside - the driver - but one of the vehicles has an extra enemy.

The second half of the mission, beginning with Johnny's phonecall about the Raykins Hotel, is regarded as a separate Stronghold mission, named "No More Tricks" - which is never visible in-game. Despite this, if the mission is exited during the second half, the first half must be completed again.

Go to the brothel.

After dispatching the patrols, Johnny Gat calls on the cellphone and directs The Protagonist towards Tanya's brothel, Raykins Hotel, in Prawn Court.

The interior of the Raykins Hotel accessible by going through the back of the building.

There are 14 Vice Kings in total, which provides little difficulty if Vice King gang members are picked off one by one, rather than blindly rushing into the atrium and engaging them all at once. Having even one Homie here can make this even less of a challenge, as they draw some of the enemy fire off of The Protagonist. Anyone can be killed inside the brothel without penalty, but only the marked Vice Kings need to be killed. Some of the defenders are in private rooms with prostitutes, and do not exit despite the gunfire outside.

The mission ends when all defenders are dead, and the neighborhood where the brothel is located, Prawn Court, is awarded.

The mission can only be failed by getting smoked or busted.

Jack Armstrong: "Following up on the Kingdom Come Records building explosion, it has now been officially confirmed that the body of rapper Aisha is missing amongst the rubble of the building that once housed Kingdom Come Records. Although the bodies of those on the upper floors of the building have been located and retrieved, the building fell in on itself and the worst damage occurred on the lower floors. According to fire and rescue personnel at the scene, there is almost no chance that Aisha survived the explosion or subsequent collapse of the building and the fire that consumed most of its bulk. She is, as are all of the people who were inside the building at the time of the explosion, presumed dead. We will keep you posted on the tragic death of Stilwater's own Aisha. Traffic and weather up next. I'm Jack Armstrong."

Johnny Gat: "Look, I know you're supposed to be dead and all, but do you have to look this pissed?"
Aisha: "Johnny, you said you'd take me out to dinner."
Johnny Gat: "And here we are."
Aisha: "At Freckle Bitch's."
Johnny Gat: "Where else would we go?"
Aisha: "Someplace good? Why couldn't you have taken me to Mikano's?"
Johnny Gat: "Aisha, it's not like... hey what's up?"
Johnny turns to The Protagonist
Johnny Gat: "Perfect timing."
Aisha: "You boys talk, I'll be right back."
Johnny Gat: "Whatever, she don't appreciate fine dining. Now I've been talkin' to Eesh's sister. Turns out Tanya's been fuckin' people in every sense of the word. Not only is she blowin' King's bodyguard Big Tony, but she's fuckin' Warren Williams, their numbers guy, whenever Tony ain't lookin'. Between Tony and Warren the only person she isn't leading around by their cock is King. So I'm thinkin' we put the hurt on Tanya, we're fuckin' up the Vice Kings. She's got an operation in Prawn Court, that's where we'll start. Roll in there and put the murder on anyone you see, customers included. Who wants to die for a blowjob right? When you go for Tanya, be careful, she's probably got some muscle in there."

So much for Tanya's hired help. Now get your ass over to the whorehouse and drop that chickenhead.

"All the King's Men" cutsceneEdit

— "All the King's Men" cutscene 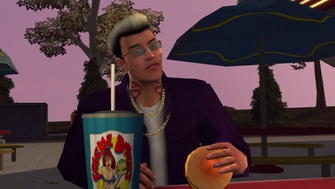 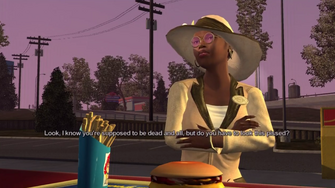 Aisha, in disguise, at Freckle Bitch's 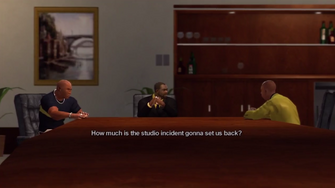 From left to right: Anthony Green, Benjamin King, and Warren Williams, during a meeting 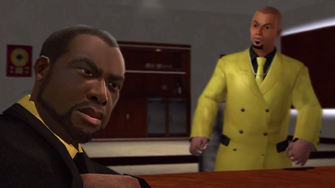 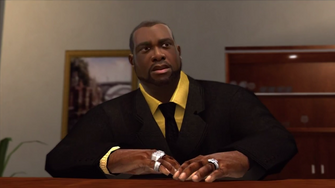 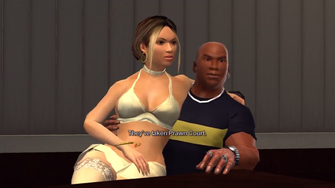 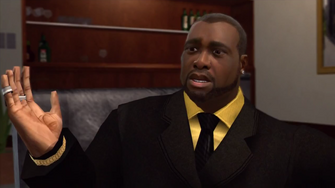 Benjamin King tells the Vice Kings what he plans to do 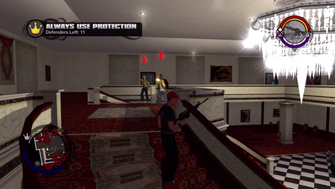 This article contains no references. See Help:Cite.
Retrieved from "https://saintsrow.fandom.com/wiki/Always_Use_Protection?oldid=328686"
Community content is available under CC-BY-SA unless otherwise noted.